Melancholia, an art exhibition at The Freud Museum 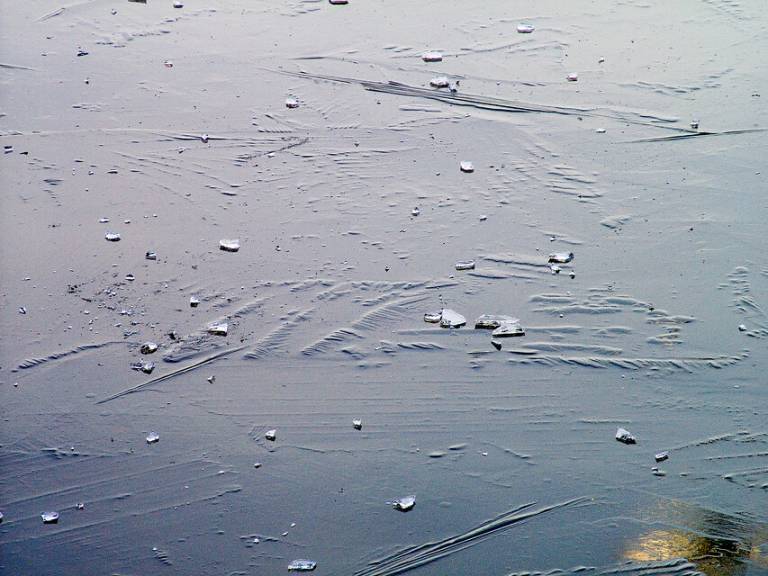 UPDATE: Melancholia will run from 21 October to 4 November, and will continue after lockdown for an extended period from 2 to 13 December 2020

Following the success of the previous exhibitions Where we are now: psychoanalytic research in the 21st century in 2015, and Secrets of the Soul in 2017, the Psychoanalysis Unit at UCL is commissioning a new exhibition in 2020. This project will follow a similar format to previous years, involving the works of students from the Slade and University of the Arts London culminating in an exhibition at the Freud Museum.

“"In melancholia, a person grieves for a loss he is unable to fully comprehend or identify, and thus this process takes place in the unconscious mind". Sigmund Freud, Mourning and Melancholia (1917)

Freud understood melancholia as a special type of mourning for a relationship that has been damaged or destroyed, when the mourner identifies with the formerly loved object instead of giving them up, and becomes highly self-critical in consequence.  However, there can be comfort in other people’s melancholia.

Artists ranging from Albrecht Dűrer to contemporary artists including Louise Bourgeois, Sophie Calle, Eva Hesse, Felix Gonzalez-Torres, Doris Salcedo and Wilhelm Sasnal have taken the concept of melancholia as a form of loss and transformed it into affirming creative action.  Our own encounters with works of art and some of our aesthetic responses to the natural environment can often be influenced by melancholia.

The museum intends to reopen from 2nd December 2020. Once the status of museums has been clarified with respect to any new restrictions which may be imposed, tickets will be available here.

Melancholia, an exhibition at the Freud Museum

Selected Artists for the UCL Psychoanalysis Unit Commission and Exhibition on Melancholia:

“Like an Alice in distressland, the depressed woman cannot put up with mirrors. Her image and that of others arouse within her wounded narcissism, violence, and the desire to kill - from which she protects herself by going through the looking glass and settling down in that other world where, by limitlessly spending her constrained sorrow, she regains her hallucinated completeness”.

I always felt immensely challenged by the idea of having to visualise feelings related to melancholia. How, without the descriptive narrative language, can one get the grasp of a void, a black hole, the shattered self, emptiness or loss? In my studio work I occasionally use optical devices or mirroring materials or surfaces, mostly to confront the viewer with an unexpected image of their own impression at the same time engaging them in the performative act of looking, or to simply blur the reality. While visiting the Freud Museum I was stunned by the lack of mirrors.
Black Sun consists of convex mirror in golden frame paired with its counterpart in form of black circle. Both the mirror and black piece are positioned together allowing the black circle to be seen as both, itself and its reflection. The viewers are involuntarily drawn into the work as their own reflection is always accompanied by a reflection of the black sun in the background.
The work shown as my contribution to the exhibition on the theme of melancholia is inspired by Julia Kristeva book “Black Sun” Depression and Melancholia”. Here I am exploring the black sun through its reflection.
Materials: convex mirror in golden frame, plywood, Black 3.0 acrylic paint; simentions: mirror 47cm diameter with frame, black circle 45cm diameter

Kasia Depta-Garapich is in her third year PhD at the Slade School of Art, UCL, London. Her research is a practice-led, critical enquiry into the relationship between art and utility and ‘use-value’ of art. She studied sculpture at the Slade School of Fine Art (MA) and Wimbledon College of Art (BA). In her studio work she explores contradiction between ‘useful’ and ‘useless’, often working with found ex-utility objects. Her most recent projects and exhibitions include: “Matter of the Anthropocene”, Mathare Art Gallery, Nairobi, Kenya;  ”Re-Domesticated”, Grymsdyke Farm, Buckinghamshire; “One Hundred Sheep”, Tatra Museum, Zakopane, Poland.  http://katarzyna-depta-garapich.com/

This sculpture is a series of repeating shapes made in brass informed by data collected from a run along the Yorkshire three peak challenge route. The shape of each section is the GPS tracked route, representing the 39 kilometers of the run and the variation of sizes is determined by the elevation recorded. The artwork is a representation of the artists run in the mountains, which was symbolic of her journey through a melancholic state. “The three mountains I climbed embodied the states of mind I felt: emptiness, self-hatred and despondency.  Expressive anger, awareness and dissension.  Acceptance, hope and opportunity”

Holly Hewitt is a multi-disciplinary artist working within the domains of art, science, psychology, topography and  nature. She views the movement of her body as a form creative expression helping her to achieve flow, establishing a catalyst for maverick thinking. Hewitt produces sculptural art works with the aim to engage people to think about their own inner world and happiness. She is currently designing a project to promote mental wellbeing through objects of navigation and nature immersed participatory workshops. Fundamentally inviting people to explore their relationship with their body and surroundings helping them to connect inwardly to generate a sense of awareness.

These paintings, of two windsocks, speak of suicide. This is a tragedy known too well by too many in Northern Ireland, with internalized wars having taken more lives now than the conflict. The two objects depicted have unknowingly become passive participants in the darkest moments of some lives. They stand at either end of the Foyle Bridge in Derry, a site synonymous with suicide, one on the historically Catholic west bank of the river, one on the Protestant east. Neither aware of their long-contested territory, nor the cold water they keep. When the poet John Montague spoke of old people as ‘the Dolmens around [his] childhood’, it stayed with me. Now I see them, to me they are the windsocks. Stoic, far removed, great monuments to death. Keepers of the passageway.

My work is an indirect look at and an exploration of the effect of The Troubles on Derry City. In my practice, I am less immediately concerned with the violence of the past, but instead intend to reflect the environment of the city by depicting the mundane spaces the citizens inhabit and the silent objects we ritualistically interact with. Through the depiction of these unlikely symbols of the footprints that the conflict has left behind, such as poverty and the growing suicide epidemic, the paintings allow the viewer a way into these difficult and charged subjects.

Melancholy isn't still, it makes the moving of time seem painfully slow as it takes over. The crystals will slowly take over the box through the duration of the exhibition, visualises how melancholia takes over the sane mind.The aquarium setting traps and restricts the chemical reaction, and isolates it from the environment it’s in, thereby representing solitude in depression. Freud believes melancholia happens in the unconscious mind, and art offers an escape from the conscious mind, which takes us into the world of the experimental to seek to visualise melancholia, to embrace.
Lead acetate solution with zinc, copper wires, in glass tank 50 x 10 x 30 cm

Cherry Song is a current undergraduate student at the Slade School of Fine Art. Through her practice, Cherry explores subjects matters with a playful attitude, confronting self-exploration in an experimentation approach for all.

Anna Strøe, Talking to Myself

Talking to Myself depicts an imagined conversation between two contrasting parallel images of the melancholia brought on by the process of gender performance, the digital 3D rendering representing the external self and the mixed media drawing the internal self.
My melancholia has been experienced through my increasing awareness of my gender and of others’ awareness of my gender, in the sense of both my physical, bodily “self” as well as the underlying identity assumptions that accompany it. By largely conforming (in the sense of physical appearance) to the gender identity that has been assumed and imposed on me, the loss of all that is prohibited by this gender imposition has been absorbed in my ego as a lost object.
For the depiction of the external self, I created a digital bust via a 3D scan, and overlaid a reflective material onto the surface, where certain parts of the head and body reflect more clearly the external environment, while other parts are muddled and breaking. The internal image reflects a body that bears the interior effects and scars of melancholia, to bring to the surface the ways in which gender norms and pressures can psychologically impact the individual. The internal depiction was a personal exploration of the complex and often contradictory emotional consequences of melancholia, including narcissism, anxiety, and disordered behavior.

Anna Strøe received her Bachelor’s degree in Cognitive and Brain Sciences in 2018 and currently studies on the MA Art and Science course at Central Saint Martins. Her work investigates notions of self from a philosophical and neuroscientific perspective, as well as sublime experiences of natural phenomena, questioning traditional Cartesian perceptions of the body in space. She is particularly interested in the role of gender in this spatial-perceptual system, and the gender constructs that are espoused by it. She mixes digital and analog media in her work to explore how technology might be used as a radicalizing agent rather than a force that distances us from our emotions and the natural world.

64 broken nails is a display of broken manicured fingernails, collected by the artist over a four year period - most were once attached to her own fingers, some belonged to the fingers of her friends. They are presented here within an entomological case, commonly used for the display of insects. Collected fondly, kept lovingly, and now presented to some degree formally, these small and bright broken nails, invite reflection on loss, identity, physicality and adornment.
Freud described melancholia as grieving ‘for a loss he [sic] is unable to fully comprehend or identify’, an unlocatable loss - something is missing, gone, but what is it exactly and where did it go? This case of broken nails speaks to Freud’s characterisation of melancholia as a special type of mourning, for a relationship that has been damaged, or in this case, broken. The work also addresses melancholia in scientific preservation, by default, quite a melancholic pursuit. The positioning of the nails within the case - which is not uniform or grid-like, contrary to classical modes of taxonomical display - is an attempt to accept the disorder or lack of clarity within the melancholic.

Straddling an intersection of writing, performance, sculpture and image making, Ruby Wroe’s practice uses the body as a sponge of social relations. She is currently working through ideas around autotheory, contemporary feminist discourse and the construction of subjectivity in the information age. Upon graduating from BA Photography at Camberwell College of Arts in 2016, she was awarded The Jonathan Harvey Studio Award by ACME & The Tomart Foundation, and The Technical Achievement Award by Camberwell College of Arts. She is currently studying on the MA at Slade and is a Sarabande Scholar.

Interviews with the Artists

Psychoanalytic psychotherapist, writer and artist Patricia Townsend spoke to each of the artists about what inspires them and their practice. Interviews will be posted here in the lead up to the opening of the exhibition.

Absence of Mind, by Cherry Song by UCL Psychoanalysis Unit

Those Stone-Faced Dolmens, by Molly McFadden by UCL Psychoanalysis Unit

Loss of Innocence, by Holly Hewitt by UCL Psychoanalysis Unit

Talking to Myself, by Anna Strøe by UCL Psychoanalysis Unit