Where We Are Now: Psychoanalytic Research in 21st Century

The UCL Psychoanalysis Unit commissioned an exhibition at the Freud Museum exploring how psychoanalytic ideas are currently used in research engaging with very contemporary issues and the challenges of the modern world.

Six emerging artists from the Slade School of Fine Art produced work that contests misconceptions and clichés about psychoanalytic research, and emphasises the discipline’s relevance to 21st century life. Their work is inspired by research carried out at the UCL Psychoanalysis Unit, which investigates topics ranging from tattooing to technology, the arts, the economy, and mental and physical health.

The Psychoanalysis Unit’s mission is to break the mould of traditional approaches to psychoanalysis, taking inspiration from the discipline’s ideas to meet modern challenges. Our truly interdisciplinary research draws on a wide range of research methods and theoretical perspectives taken from neuroscience and clinical trials, anthropology, economics and history. 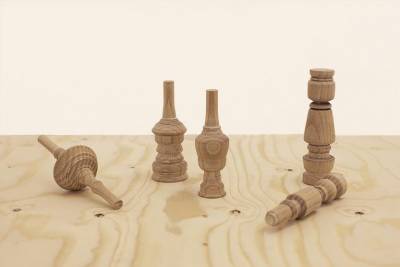 Phantastic objects reflects on Professor David Tuckett’s studies on emotional finance. Five lathed wooden objects represent data quantifying the rise and fall of excitement and anxiety in reaction to share price fluctuations on the financial market. Narratives and phantasy are ways of organizing perception in a structure that becomes a plan. I consider the increasing importance attributed to quantification for any evaluation as being inscribed in the global pursuit of a shared language. Phantastic Objects is my reflection on the beauty of this process.”
Maud Craigie, Affronted/Yawning 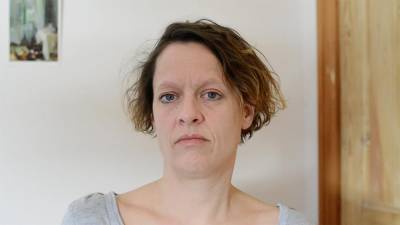 Affronted/Yawning explores the complexity of interpreting facial expressions. A woman stares directly into the camera, while a voiceover reads out an alphabetical list of words that can be used to describe different facial expressions. The large quantity of descriptive words speaks to the nuances of reading an expression and explores how our understanding of a face can subtly change.

Professor Peter Fonagy and Professor Patrick Luyten conduct research into the difficulties people with Borderline Personality Disorder experience when trying to understand the self and others in terms of mental states. And with the current overload of visual stimuli, both in the busy streets of London and in the virtual streams of the web, we are all continuously being tested in our ability to accurately identify emotions, and we all fail at times.

Affronted/Yawning offers a moment of reflection: sometimes the words seem to match the face, while at other moments the effect is jarring. The still face of the woman, combined with the aural bombardment of options that we can apply to her face, aims to draw attention to the subtle distinctions of meaning we have to infer when attempting to understand others.

I am interested in the division between the personal and the social and how the body mediates the two. Through drawing, I represent subjectivity with particular attention to the relationship between interiority and exteriority. Derived from my memories, the drawings describe an everyday scenario suffused with unspeakable emotions. Memories often occur to me as specific gestures. The living body is a hinge between the subject and the world. Only through a specific touch, moment or event, am I able to perceive myself and my relation to the world. The work explores the idea that invisible unspeakable sensations unfold in the portrayal of visible mundane events, and how subjectivity is presented through a direct and intimate act of drawing.
Rie Marsden, Untitled 1 & 2 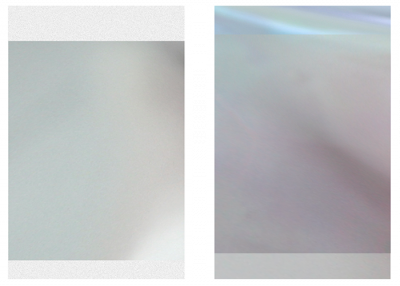 In these works, I seek to consider what can be communicated through reduction to a certain end; to convey the underwater feeling that comes with warped perception and the absence of lucid thinking.

Here, with a lack of pictorial definition and an emptiness of frame, the eye may be drawn to subtle imperfections and indentations left on the surface of the works.

The work was inspired by the writing of Professor Alessandra Lemma on the psychological function of cosmetic surgery, ‘the lure of changing the surface of our body’ and Dr Katerina Fotopoulou’s work on social experience and the deeper neural mechanisms of this. Preliminary trials were conducted with White Spirit and Acetone liquids on Acetate, observing how these solvents disintegrated the surface of the prints and retained a chemical scent.

In these final images, though figuratively the body may not be apparent it is present, distorted in the closeness of the camera. These photographic depictions are of the surface of the skin, nails and nail polish. It further references the scene depicting Jill Masterson’ suffocation of the skin by gold paint in Guy Hamilton’s (1964) film Goldfinger, and Freud’s account of development, the body and desire. 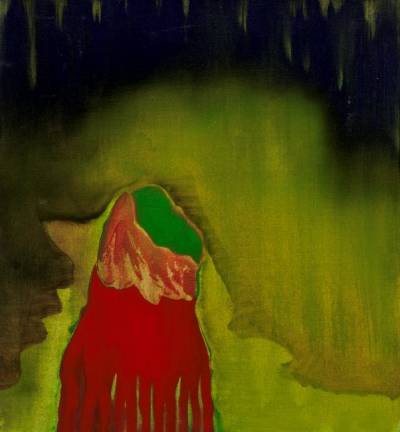 In my creative process I have been exploring figural elements stemming from memories of things that were already seen. The process of painting has elements of staining and removing, which relates to the “disappearance and return” mentioned in Freud’s Beyond the Pleasure Principle. In a way these objects appear in a faded and distorted way relating to memories being forgotten or interpreted as fantasy relating to the theory of childhood attachment.
In another Freud essay entitled Leonardo da Vinci and a Memory of his Childhood, he describes a passage from one of da Vinci’s notebooks on his childhood:
“It seems that I was always destined to be so deeply concerned with vultures; for I recall one of my very earliest memories that while I was in my cradle a vulture came down to me, and opened my mouth with its tail, and struck me many times with its tail against my lips.”

This is then a childhood memory of da Vinci’s in which in fact was a fantasy. It is improbable that this could have happened; therefore memories are altered and falsified. This is where my work comes in: the objects depicted in my work are often fantasies of memories.
Eiko Soga, >・〜< Sleep // between guided imagery and homeless memory 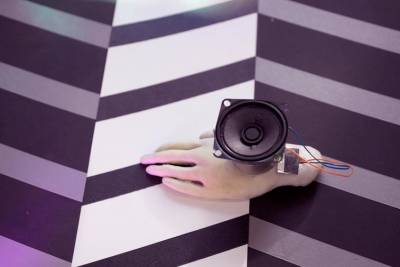 There is a little girl on a phone 〜 talking loudly and quietly.

Letting her mother overhear her conversation, but talking to Hello Kitty intimately.
There is a boy who sits next to her at school. They look at his penguin key ring together and say how sweet it is. Penguin keeps their friendship - * - Everything is still soft and warm.
Suddenly and off plan > something happens. Enough to shift 1mm of something in her. Enough to kill so much in her. To change everything and nothing. The world becomes an unsafe place.
Dr. B asks How do you sleep?  to access her trauma.
Where do homeless memories wonder at night?
It comes back again and again as if it is always there. She misses a chance to find her memory, a home of past.
Perhaps move eyes quickly and slowly. Rewrite memories.
Rely on conversation, technology and objects, to leach an untouchable space, like physicists looking for dark matter. Dark matter, like a deeply hidden psychological puddle, which is yet to be found and given a name.
Making props for a film that is not going to be made.