(Don’t) Catch Me If You Can: Toxicity of Highly Infectious Prions Under a Microscope 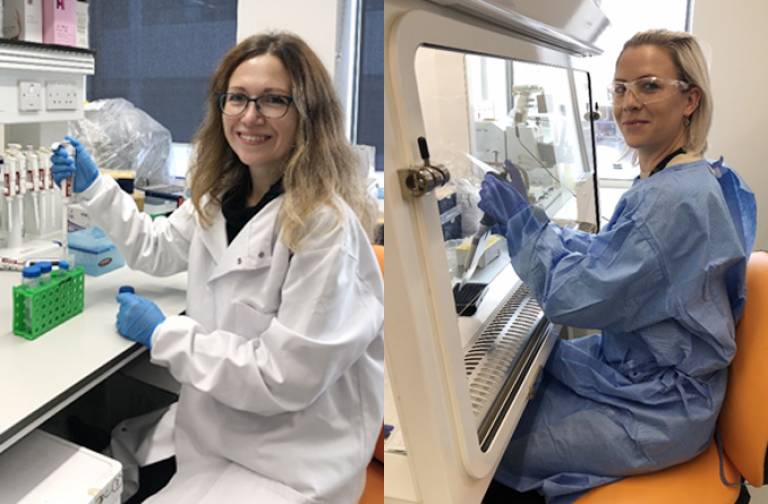 Prion diseases are caused by an infectious form of one of the body’s proteins, known as a prion. A recent publication by researchers at the Institute of Prion Diseases provides the first experimental evidence that damage to brain cells (called neurotoxicity) is not directly caused by prions themselves. In this article, the lead authors, Dr Madeleine Reilly and Dr Iryna Benilova, describe how they did this research and the next steps they will take to investigate further. They used a new imaging-based method to characterise neurotoxicity of prion-infected brain tissue. This method will provide researchers new approaches to test the neurotoxicity of different samples, enabling scientists to better understand how neurotoxicity occurs in prion diseases and to develop and target drugs more effectively.

In prion diseases, the infectious agent is able to make one of the body’s own proteins, the normal cellular prion protein, change shape into an infectious form known as a prion. However, a plethora of different ‘abnormal’ or disease-associated forms of the prion protein are created in the disease, not just prions, which are theorised to have different properties. For example, some forms might be neurotoxic, and other forms infectious.

Prion infections can go undetected for many months and even decades before the onset of symptoms. During this time, prions multiply and colonise the brain. As an individual can harbour extremely high levels of prions in their brains without damage to neurons (brain cells), we hypothesised that prions themselves might not be directly neurotoxic. If not, then is there another abnormal form of prion protein, distinct from prions that drives neurotoxicity?

Iryna comments: “Recent studies in a mouse model of prion infection showed that prion replication and the onset of neurotoxicity could be uncoupled. Mice were engineered with different amounts of prion protein in their brains, but these quickly accumulated the same level of infectivity upon inoculation with prions. However, the incubation period (how long it takes for the mouse to become ill) was significantly shorter in those mice which had the most prion protein. The onset of symptoms was preceded by a “plateau phase” of prion infection during which the level of prions did not substantially increase. The more prion protein that was present, the faster the mice become ill, even though they have equal amounts of prions. To discover the difference between prion infectivity and neurotoxicity, it’s crucial to understand what is happening during this plateau phase. Our idea is that a special neurotoxic form of prion protein is generated and its accumulation leads to neuronal loss.

We wanted to develop a method that could discriminate between toxicity of prion-infected and uninfected (control) brain tissue. We started by growing neurons in the lab which were isolated from developing mouse brains. After 10 days we had relatively mature-looking neurons with synaptic connections and networks of neurites (important features of healthy neurons). We treated these neurons with samples that contained high levels of prion disease neurotoxicity. Using live cell imaging on a system called an IncuCyte, we observed a significant retraction of neurites after only a few hours of treatment, indicating that we could measure the neurotoxicity in the sample.”

Madeleine commented: “I am very fortunate to have been involved in this interesting research study. We developed a new approach to analyse neurotoxicity using a high-content microscope called the Opera Phenix. The method uses algorithms to piece apart details in digital fluorescent images, detecting damage to neurons after they are treated with prion-infected brain samples. The method can identify and analyse breakage of neuron branches and loss of important connecting structures, called dendritic spines, which are essential for neurons to communicate with each other and function normally.

With our new tools, we were able to confirm that prions themselves are not directly toxic, whilst they remain extremely infectious. I believe this finding is vital to our understanding of prion diseases and of other more common neurodegenerative diseases. It could also facilitate the better targeting of drugs to prevent or halt neurodegeneration in prion diseases. But the question remains, what is responsible for neurotoxic damage to brain cells in prion diseases? I hope that our new research methods will help to study toxic forms of disease-associated prion protein, and even develop drugs to slow the damage they cause.”

Iryna went on to say: “Indeed, the next big challenge for us is to find the neurotoxic agent in prion diseases. To address this, we are trying to purify the substance that causes neurotoxicity using different detergents. We described in the paper that addition of a particularly harsh detergent called sarkosyl destroys toxicity of prion-infected brain homogenate without diminishing infectivity. This demonstrates that toxicity and infectivity are caused by different entities in prion-infected samples. A careful choice of detergent will be vital for preserving the toxic substance in the samples. In future work, we will use our imaging-based assay to study the generation of neurotoxic substances during the plateau phase of prion infection, and then further analyse these using other scientific methods to understand how they might cause neurotoxicity. Isolation and identification of prion-disease-induced toxic substances could become a next chapter in understanding neurodegeneration in prion and prion-like diseases”.