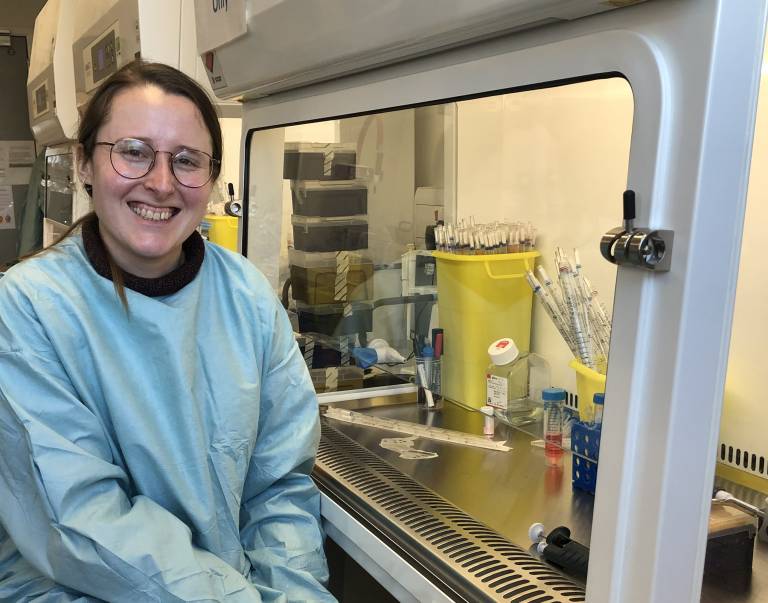 A recent study led by the Human Genetics Programme at the Institute of Prion Diseases has uncovered two new risk factors for the most common human prion disease, sporadic Creutzfeldt-Jakob disease (sCJD). This research is important because knowing more about genetic risks for a disease allows scientists to better understand the molecular causes. Here, Emma, a PhD student at the Institute, explains more about her work.

Prion diseases are a class of neurodegenerative disease caused by infectious proteins, which can be found in humans and animals. In the same way that germs like bacteria and viruses can make you ill by growing in the body, a specific protein (the prion protein) can also behave like a germ and become harmful. In its normal form this protein, called the cellular prion protein, is found in many tissues in the body, but the cells in the nervous system have the highest concentration. In the disease this protein misfolds into an abnormal shape called a prion, which can then recruit and refold other cellular prion proteins in a chain reaction which eventually leads to neurodegeneration. Importantly, this all happens without any DNA or RNA which is needed for other infectious agents (e.g. viruses) to replicate.

Prion diseases, including Creutzfeldt-Jakob disease (CJD), can be caused in this way, however they can also be inherited or sporadic (sCJD) – that is to say, they occur spontaneously with no obvious genetic cause or exposure to infectious prions. The most common human prion disease sCJD has a lifetime risk of approximately 1 in 5000. Changes in the gene which controls the production of the cellular prion protein, PRNP, have long been known to alter an individual’s risk of developing sCJD. Similarly, a person’s age also influences their risk. However, until recently there were no other known risk factors for sCJD, leaving us with only speculative reasons why some people develop the disease and others do not.

To investigate this, we did what is called a genome-wide association study (GWAS). Over the last decade, scientific and technological advances have made it possible to study and compare a large proportion of the genetic information from thousands of individuals. The reduced cost of obtaining genome-wide information (meaning the complete DNA instructions in the body) combined with an increased understanding of human genetic variation has enabled us to perform genetic studies on a large scale. Through comparing the genetic sequence of thousands of people who develop a particular disease against those who don’t, we are able to identify regions of the genome which can subtly increase a person’s risk.

In our recently published article in The Lancet Neurology, we illustrate the first GWAS to identify significant genetic risk factors for sCJD outside of the PRNP gene. Using a large-scale international collaboration of most human prion disease specialists working in European ancestry populations, we were able to obtain genome-wide information from 5208 individuals with sCJD, which we compared to the genetic sequence of many thousands of healthy individuals. We identified three regions of our genome which are significantly associated with sCJD disease risk. As expected, one was the PRNP gene. Excitingly, we also found two places on chromosomes 1 and 22, indicating additional genes are likely to be involved in sCJD. Interestingly, this affect appeared to be specific to the sporadic form of prion diseases.

To pinpoint exactly what was driving the increased risk, we used different statistical methods to predict which genetic changes at these two places in the genome might most likely alter biology. This highlighted the genes STX6 and GAL3ST1 as most likely to be associated with sCJD risk. For example, STX6 encodes a protein called syntaxin 6. A genetic variant identified in our study in the region of the STX6 gene is associated with a higher level of syntaxin 6 being made in multiple brain regions including those that seem to be important in sCJD. On chromosome 22, we found that genetic variation in the GAL3ST1 gene altered the amino acid sequence of an enzyme involved in lipid (fat) metabolism.

Performing this GWAS has highlighted two previously unrecognised genes which are associated with prion disease biology, opening up an array of potential experiments to better understand sCJD. For example, syntaxin 6 is involved in the movement of other proteins around cells, which could include a disease-causing form of the prion protein and so could potentially promote the spread of the disease. GAL3ST1 on the other hand is the gene which encodes an enzyme involved in producing a fatty substance called myelin which surrounds some neurons. Modified functions of the enzyme could change the concentration of lipids or alter membrane structures important for sCJD. Further research into how these genes are involved in prion disease is already underway.

“This was a really exciting study to be a part of. Genetics provides powerful tools to understand disease because, as these patients are born with mostly the same DNA sequence they carry throughout life, we can be sure that any significant discoveries from this kind of study are going to be contributing to the development of the disease. This has therefore provided the rare opportunity to investigate two new pathways that cause sCJD. Better understanding could lead to new treatment avenues. Knowing that my research could have direct implications for human patients, is something that has really motivated me.

I found the discovery of syntaxin 6 especially fascinating and this has driven the direction of my PhD research. It is becoming apparent in the field that understanding more about how small changes in the movement of proteins within our cells could be an underlying mechanism not only for sCJD, but for many different neurodegenerative diseases. I believe this process will be vital to our understanding of these diseases and designing effective treatments and is something I am excited to be investigating further as I take the next steps in my academic career.”