COP26 Universities Network: Transition to post-carbon economy must be inclusive

A group of academic experts, co-led by GGI Deputy Director Tom Pegram, calls for more attention to the justice implications of the transition to a post-carbon economy. 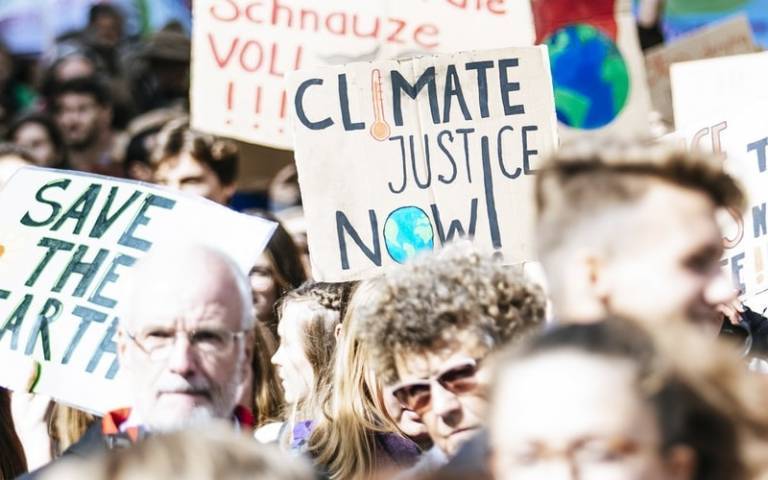 A new briefing paper, produced by the COP26 Universities Network, warns that the transition to a climate-neutral economy must be socially inclusive and supported by citizens. The authors of the briefing, including the UCL Global Governance Institute (GGI)’s Tom Pegram and Julia Kreienkamp, emphasise that the negative impacts of climate change and mitigation measures are distributed highly unevenly across time, place and social context, threatening to exacerbate existing inequalities and making it more likely that decarbonisation policies will encounter social backlash.

The paper explores the promise and shortcomings of the “just transition” agenda, which has risen to prominence following the adoption of the 2015 Paris Agreement. It points to several “blind spots” in the current debate, which is often narrowly focused on job creation, and calls for a broader and more nuanced approach aimed at steering societies towards an ecologically sustainable and socially more inclusive path. This is even more imperative in light of the COVID-19 pandemic which has served as a stark reminder that socio-economic disruptions tend to worsen existing inequalities on the local, national and global level.

Whilst the paper emphasises that there is there is no “silver bullet” approach to delivering a just transition, it identifies a number of governance tools, institutions and actors that will be required to ensure that the costs and benefits of ambitious climate action are shared in a fair and equitable manner. Beyond government interventions such as job creation, retraining or compensation schemes, this could include community-led energy initiatives, a push towards more private sector accountability, continuous democratic engagement, greater policy transparency, and more interdisciplinary research. Importantly, while the negative effects of climate change and climate policies are locally experienced, the difference in vulnerability to these effects is often globally produced. Therefore, just transition agendas must incorporate a global perspective and ensure that additional support is available to developing countries.

The COP26 Universities Network brings together more than 45 UK-based universities to help deliver climate change outcomes at the UN Climate Summit in Glasgow and beyond. You can access the full policy briefing at “Just Transition: Pathways to Socially Inclusive Decarbonisation”.