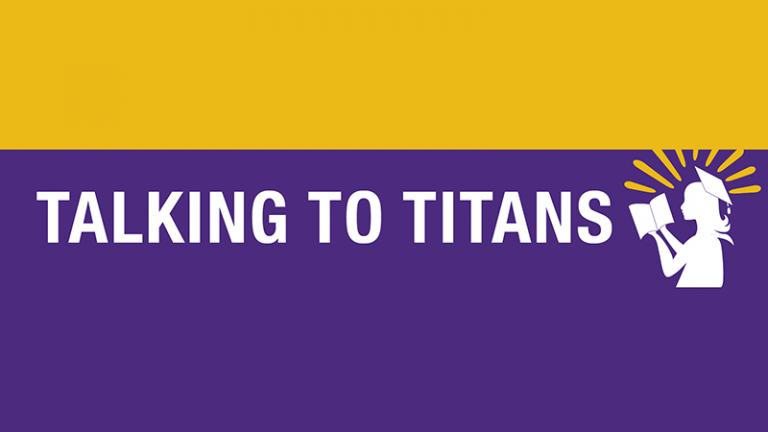 Talking to Titans is a brand new seven-part podcast series where inspiring senior UCL women tell us their stories of achieving complex careers, managing work-life balance and surviving to tell the tale. The podcasts launched on Monday 2 March, to coincide with International Women’s Week 2020.

In each episode, Cathy and Gudrun sit down with a different brilliant mind from the UCL senior team, to share experiences, anecdotes, and a lot of good advice.

The podcasts launched on Monday 2 March (16.00 GMT) to coincide with International Women’s Week 2020. They will be uploaded one a day until 8 March.

Ijeoma Uchegbu is Pro-Vice Provost for Africa and the Middle East and Professor of Pharmaceutical Nanoscience. In this episode, she spoke to Cathy and Gudrun about doing her PhD while single-handedly looking after a young family, racial inequality in academia, and the work that she’s doing at UCL to bring about positive change.

Sara Mole is Provost’s Envoy for Gender Equality and Professor of Molecular Cell Biology. She spoke to Cathy and Gudrun about why inequality still exists at the senior ranks in academia, and how to close that gap.

Ruth Kennedy is one of the founders of the Louis Dundas Centre for Children’s Palliative Care – a Centre for research, teaching and clinical practice at Great Ormond Street Hospital, and UCL’s Institute of Child Health. In this episode, she talks about dealing with the grief of her son’s death while supporting a family and running a business at the same time.

Sasha Roseneil is Dean of Social and Historical Sciences, Professor of Interdisciplinary Social Sciences, and psychoanalytic psychotherapist. In this episode, she talks to Gudrun and Cathy about sexual harassment, the importance of LGBTQ+ spaces, and dealing with emotionally difficult moments in your professional life.

Nicola Brewer is Vice-Provost International at UCL, but spent the last forty years in international diplomacy for the civil service. She talks to Cathy and Gudrun about her feelings towards the title of ‘academic’, and why mentors are so important if you want to go far in your career.

Stella Bruzzi is Dean of Arts and Humanities and Professor of Film and TV. In this episode, she talks to Cathy and Gudrun about gaining respect in her field, and the difficult decisions she’s made when it comes to parenting.

Lesley Regan is the ex-President of the Royal College of Obstetricians and Gynaecologists, Secretary General of the International Federation of Gynecology and Obstetrics, Head of Obstetrics and Gyneacology at Imperial College London and Honorary Doctorate at UCL. In this final episode of Talking to Titans, she talks to Cathy and Gudrun about dedicating her life to improving women’s health, and how imposter syndrome still follows her today.