Project description: The mitotic spindle is a validated target in cancer chemotherapy. Taxanes and vinca alkaloids target the MTs of the mitotic spindle and are currently used to treat a variety of tumours. However, these current drugs are prone to the development of resistance and display dose limiting toxicities. 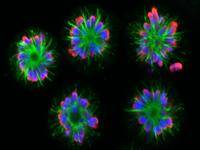 Thus, efforts are underway to improve existing drugs and identify new protein targets in the mitotic spindle. Currently, several novel spindle targets for drug development are under investigation including members of the kinesin superfamily. Kinesins form a superfamily of proteins with key roles in intracellular transport and cell division. There may be as many as 16 different ‘mitotic’ kinesins involved in various aspects of mitotic spindle assembly and function, several of which are potential candidates for drug development in cancer chemotherapy.

Our lab’s research focuses on members of the kinesin superfamily, with an emphasis on mitotic motors and their associated proteins. To this end we apply interdisciplinary approaches to identify and/or improve inhibitors of human mitotic kinesins that may lead to new chemotherapeutics.

Using an in vitro screening procedure, we originally identified S-trityl-L-cysteine (STLC) as a new, potent Eg5 inhibitor [1]. We have shown that tumour cells treated with STLC are blocked in mitosis leading to apoptosis [2-3]. An initial structure-activity relationship (SAR) study identified a range of derivatives that were more potent than STLC [4].

In collaboration with different chemistry groups, we tested distinct series of new STLC analogues for their inhibition of Eg5 in a variety of tumour cell lines [7]. Based on these results, we developed a series of 4,4,4-triphenylbutan-1-amine inhibitors [8]. This new generation systematically improved on potency: the most potent C-trityl analogues exhibit Kiapp values ≤ 10 nM and have GI50 values around 50 nM, comparable to the phase II clinical benchmarks, ispinesib and SB-743921. Crystallographic studies revealed that they adopt the same overall binding configuration as S-trityl analogues [9,10]. Evaluation of their drug-like properties revealed favourable profiles for future development. The triphenylbutanamine analogue possesses very good bioavailability (51%), and also displayed in vivo anti-tumour growth activity in nude mice xenograft studies (Figure 3) [11].

Our next aim is to develop STLC-based inhibitors with further improved efficacy in xenograft models of multiple myeloma alone or in combination with FDA-approved drugs, and further enhanced drug-like properties.