UCL's Summer Course in English Phonetics, founded in 1919 by the 'real Professor Henry Higgins', celebrates its centenary edition this year with a remarkable photographic record.

19th-30th August this year will see the centenary edition of the annual Summer Course in English Phonetics (SCEP, pronounced 'skep'), which has been attracting a hundred or more students of English pronunciation to UCL from all over the world since 1919.

The course was founded by Prof. Daniel Jones, widely considered the 'father of English Phonetics', who was head of the Department of Phonetics from 1912 and retired in 1949. Jones has also been described as 'The Real Professor Higgins' – the title of a 1998 biography by two of SCEP's tutors, Inger Mees and the late Bev Collins. Henry Higgins, of course, was the hero of George Bernard Shaw's Pygmalion, who transformed a flower girl into a lady through the power of phonetics, and was famously played by Rex Harrison in the musical version My Fair Lady.

A remarkable photograph of the original 1919 summer course has come to light, showing all the staff and students at the UCL portico. The picture lay covered in grime in a dark understairs cupboard at Gordon Square, the former home of the Phonetics Department – until it was rediscovered by former SCEP Director Dr. Michael Ashby, who has restored and scanned it at high resolution for the centenary. 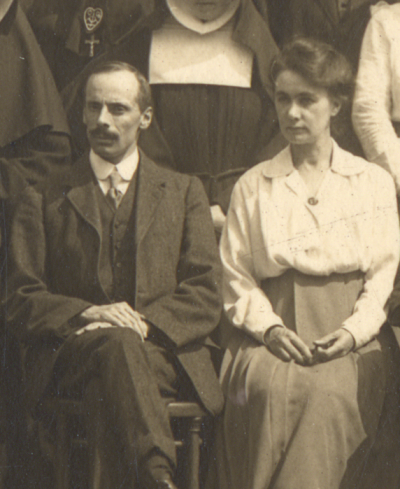 In the photo we can see the wide range of men and women the course attracted, including members of the military and a number of nuns, believed to be from France. Front centre is Jones himself, and beside him Lilias Armstrong, his most trusted colleague, who later co-directed the summer course.

"It provides an amazing glimpse into the course's past," says current Director Dr. Geoff Lindsey, Honorary Lecturer in Linguistics at UCL. " Jones's achievement in creating such huge interest in English phonetics, so soon after the First World War, is truly impressive. We still gather at the portico for a group photo on the first day of the course each year, and the 1919 picture gives an inspiring sense of continuity."

The Second World War caused the suspension of the course, but it was restarted in 1953 by Prof. A. C. Gimson. It has run every year since 1953, so 2019 is the 67th consecutive year and, it seems, the 85th since the foundation.

"We hope the centenary SCEP will be very special," says Dr. Lindsey. "David Crystal, the world-famous authority on language and speech, has agreed to be our Centenary Guest Lecturer. And, in collaboration with UCL's Prof. Andrew Nevins, we're celebrating the link between Daniel Jones and the fictional Henry Higgins by laying on a unique bus tour of London sights with something of a Pygmalion or My Fair Lady theme. This will give our participants deeper insight into Cockney and Received Pronunciation – and put the 'fun' into phonetics."

Of course, SCEP's main emphasis is always on modern English pronunciation. There are no academic prerequisites for the course: participants range from phonetic 'newbies' to full professors, and always include some native speakers of English too. Those who come to SCEP can brush up their knowledge of the theoretical side of phonetics, observe practical teaching techniques, or just improve their English pronunciation. 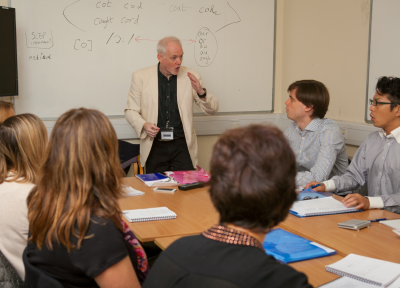 SCEP has always followed a format of lectures, ear-training sessions and practical classes where participants can practise their sounds in small groups. Daniel Jones didn’t believe that students gain much benefit from lectures. He thought the best way to teach was in smaller practical classes, and these are still kept to about eight students.