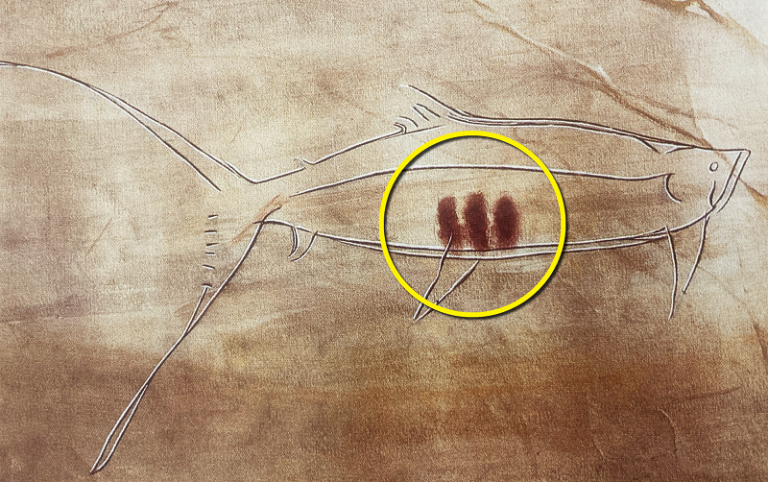 Archaeologists already knew that the markings – sequences of lines, dots and other shapes – conveyed information but did not know their meaning. The team of academics found that these symbols, combined with nearby animal drawings, expressed sophisticated information about animals including wild horses, deer, cattle and mammoths. They date back to at least 20,000 years ago.

In the study, published in the Cambridge Archaeological Journal, the researchers found that the marks record information numerically and reference a calendar, rather than recording speech. The markings therefore cannot be called ‘writing’ in the same sense as pictographic and cuneiform systems of writing that emerged in Sumer from 3,400 BC onwards.

The team, comprised of academics from UCL and Durham University and led by an independent researcher, refers to the markings as a ‘proto-writing’ system, which pre-dates other token-based systems that emerged during the Near Eastern Neolithic period by at least 10,000 years.

Lead researcher Ben Bacon said: “The meaning of the markings within these drawings has always intrigued me so I set about trying to decode them, using a similar approach that others took to understanding an early form of Greek text.

“Using information and imagery of cave art available via the British Library and on the internet, I amassed as much data as possible and began looking for repeating patterns. As the study progressed, I reached out to friends and senior university academics, whose expertise were critical to proving my theory.”

The team used the birth cycles of equivalent animals today as a reference point to work out that the number of marks associated with Ice Age animals was a record, by lunar month, of when they were mating.

They worked out that a ‘Y’ sign used stood for ‘giving birth’ and found a correlation between the numbers of marks, the position of the Y and the months in which modern animals mate and birth respectively.

Co-author Honorary Professor Tony Freeth (UCL Mechanical Engineering) joined the research team because of his work deciphering the function of the ancient Greek astronomical clock, the Antikythera Mechanism. He said: “Lunar calendars are difficult because there are just under twelve and a half lunar months in a year, so they do not fit neatly into a year. As a result, our own modern calendar has all but lost any link to actual lunar months.

“In the Antikythera Mechanism, they used a sophisticated 19-year mathematical calendar to resolve the incompatibility of the year and the lunar month – impossible for Palaeolithic peoples. Their calendar had to be much simpler. It also had to be a ‘meteorological calendar’, tied to changes in temperature, not astronomical events such as the equinoxes.

“With these principles in mind Ben and I slowly devised a calendar which helped to explain why the system that Ben had uncovered was so universal across wide geography and extraordinary time-scales.”

Co-author Professor Paul Pettitt (Durham University) added: “The study shows that Ice Age hunter-gathers were the first to use a systematic calendar and marks to record information about major ecological events within that calendar. In turn we’re able to show that these people, who left a legacy of spectacular art in the caves of Lascaux and Altamira, also left a record of early timekeeping that would eventually become commonplace among our species.”

Co-author Professor Robert Kentridge (Durham University) said: “The implications are that Ice Age hunter-gatherers didn’t simply live in their present, but recorded memories of the time when past events had occurred and used these to anticipate when similar events would occur in the future, an ability that memory researchers call mental time-travel.”

The team hope that deciphering more aspects of the proto-writing system will allow them to develop an understanding of which of information early humans valued.

Mr Bacon added: “As we probe deeper into their world, what we are discovering is that these ancient ancestors are a lot more like us than we had previously thought. These people, separated from us by many millennia, are suddenly a lot closer.”