In his first major speech of 2023, Tony Danker, the CBI Director-General, chose UCL to spell out his vision of how the UK needs to urgently boost its economic growth and grasp the opportunities of the green economy and the life sciences sector. 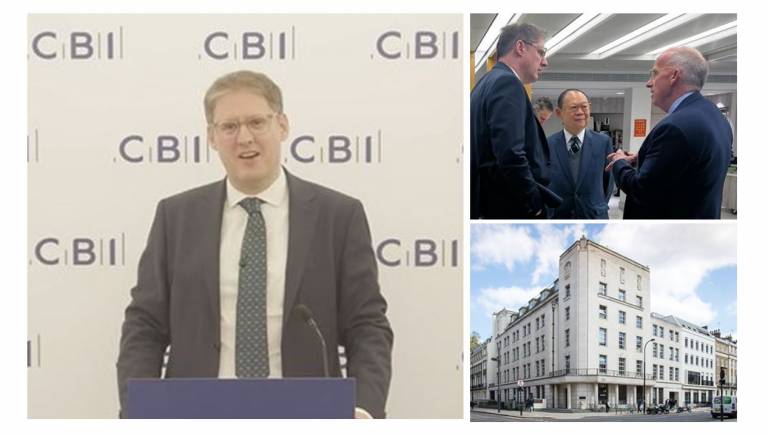 To an audience of business leaders and academics, Mr Danker opened his speech by reflecting on UCL’s history and its importance to education, learning and the economy.

UCL is, he said: “An institution, that for almost two centuries has been pushing the frontiers of knowledge to benefit our economy, our country, and our lives – so delighted to be here.”

In his speech Mr Danker said the UK Government is likely to meet its modest growth targets this year, but said getting the level of growth we need meant taking some big decisions now and not waiting until 2024.

Outlining his vision, he said the UK needs better tax and investment incentives for business, should invest in and stimulate the green economy, “the biggest innovation opportunity of the 21st century”, called for a new approach to tackle labour and skills shortages, and asked for a review to the government’s current approach to repealing EU law.

Focussing on the green economy, Mr Danker said the UK needs to invest in innovation and scale up the technology and life sciences sectors.

“Everyone loves a tech start up, or a photo with a robot, but rather than just a glamorous invention, innovation should encompass and improve the competitiveness of our whole economy, every region and sector,” he said.

And he added: “Let’s double down on that life science vision to ensure the sector doesn’t leave Britain, but stays and grows.”

In that vein, Mr Danker, said his solutions for the government were to: “Transform our tax system, reward those who invest, be bold on labour shortages, fight back on green innovation – don't be outspent and outsmarted by the competition ­- and don’t be reckless on regulatory divergence, be ready.”

UCL is a globally renowned and world top 10 university and proudly contributes to the social and intellectual life of both London and the UK more widely. A recent independent report found UCL contributes £9.9bn of economic impact annually to the UK economy, £2bn to London’s and supporting 11,640 local jobs.