The Congo peatlands turned from a major store of carbon to a source of carbon dioxide emissions thousands of years ago due to a drying climate, according to a new study involving UCL researchers. 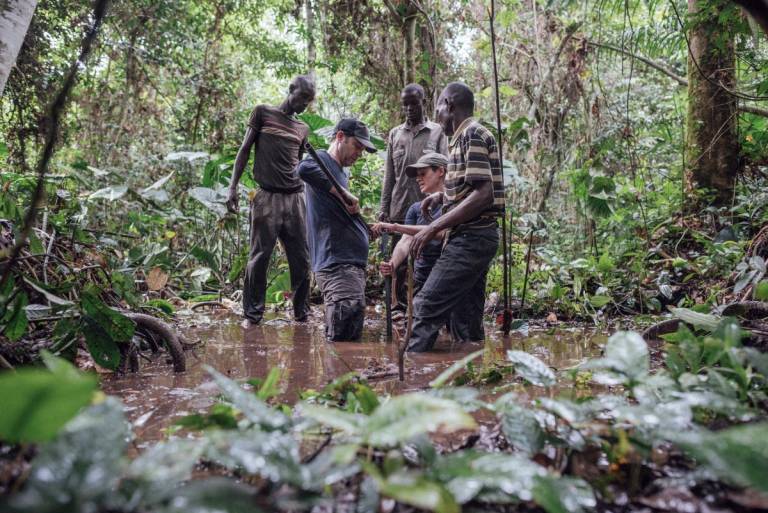 Published today in Nature, the study highlights the potential of the Congo peatlands – the largest tropical peatland in the world – to again release billions of tonnes of stored carbon into the atmosphere in a future warmer world.

The study found that a drier climate in central Africa beginning 5,000 years ago led to peat decomposition - triggered by a drop in the water table, exposing the peatlands to the air - which released carbon dioxide into the atmosphere. The peatlands only returned to sequestering and storing carbon as the drying trend stopped and the climate got wetter in the past 2,000 years.

The new study highlights that the peatlands are fragile and vulnerable to climatic changes. The researchers say that if they are found to lie close to a climatically driven drought threshold – or tipping point - a positive carbon cycle feedback in the Earth system could be triggered, whereby the peatlands add further carbon dioxide to the atmosphere and induce further, accelerated warming.

Currently, the Congo peatlands store around 30 billion tonnes of carbon - equivalent to the total emissions from global fossil fuel burning over three years.

Senior author, Professor Simon Lewis (UCL Geography and University of Leeds), said: “When peatlands are wet, they suck carbon out of the atmosphere and when they get too dry, they release it.

“Our study brings a brutal warning from the past - if the peatlands dry beyond a certain threshold they will release colossal quantities of carbon to the atmosphere, accelerating further climate change.

“There is some evidence that dry seasons are lengthening in the Congo Basin, but it is unclear if these will continue. But evidence from our study shows that drier conditions have existed in the past and did trigger a breakdown of the peatlands as a store of carbon.

“This is an important message for world leaders gathering at the COP27 climate talks next week. If greenhouse gas emissions drive the central Congo peatlands to become too dry, then the peatlands will contribute to the climate crisis rather than protect us.”

To establish their findings, Congolese and European scientists, coordinated by researchers at the University of Leeds, analysed peat samples taken from the remote swamp forests of central Congo, in an area with some of the deepest peatlands in the region.

By analysing plant remains in a six-metre-long core sample, the researchers built a record of the vegetation and climate that existed in the Congo basin over the last 17,500 years. Waxes from plant leaves, which are preserved in the peat, indicate rainfall levels at the time the plant was living.

The study found that the climate began to get drier 5,000 years ago, a process that continued for about 3,000 years, most likely causing the peatlands to shift from a carbon store to a carbon source.

At the most intense period of drought, rainfall was reduced by at least 800mm a year. This caused the water table in the Congo peatlands to drop, exposing older layers of peat to the air, causing oxidation and release of CO2.

Lead author of the study, Dr Yannick Garcin (National Research Institute for Sustainable Development of France), said: “The peat samples show us that there was a period of around 5,000 years when there was almost no build-up of peat, less than 0.1 mm per year.

“The samples also reveal what the rainfall and vegetation were like when the peat was formed. Together they give a picture of a drying climate, starting 5,000 years ago, that got progressively drier until about 2,000 years ago.

“This drought led to a huge loss of peat - at least two metres. The drought flipped the peatland to a huge carbon source as the peat decomposed. This decomposition only stopped when the drought stopped, allowing peat to start accumulating again.”

Between 7,500 and 2,000 years ago, the peat layers either decomposed or never accumulated. The researchers described this as the “ghost interval". This same ghost interval was found in peat samples from hundreds of kilometres away in the Democratic Republic of the Congo (DRC) - indicating it occurred across the whole peatland region.

Expedition lead Professor Corneille Ewango (University of Kisangani, DRC) said: “This is another astonishing finding about the peatlands, they are more vulnerable than we thought, and everyone must play their role in protecting them.

“Polluting countries must cut their carbon emissions fast, to limit the possibility of droughts pushing the peatlands past their tipping point. The DRC will also need to strengthen protection of the peatlands. At stake is one of the most wildlife and carbon-rich ecosystems on Earth.”