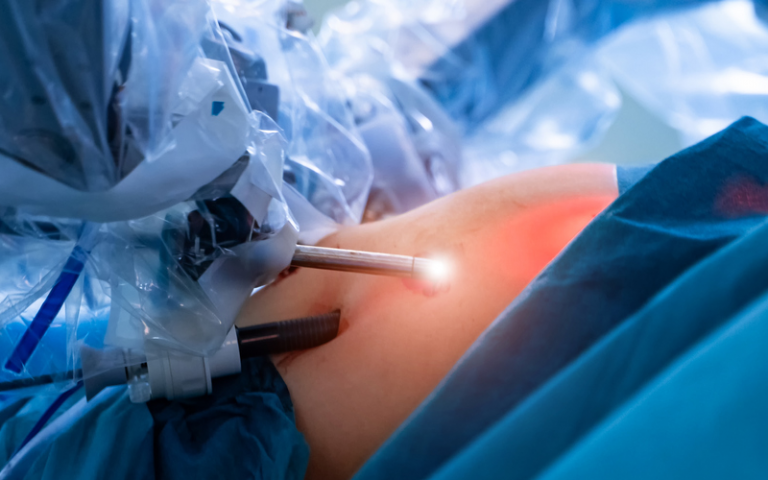 The study, published in JAMA and funded by The Urology Foundation with a grant from the Champniss Foundation, also found robotic surgery reduced the chance of readmission by half (52 per cent), and revealed a “striking” four-fold (77 per cent) reduction in prevalence of blood clots (deep vein thrombus & pulmonary emboli) - a significant cause of health decline and morbidity - when compared to patients who had open surgery.

Unlike open surgery, where a surgeon works directly on a patient and involves large incisions in the skin and muscle, robot-assisted surgery allows surgeons to guide minimally invasive instruments remotely using a console and aided by 3D view. It is currently only available in a small number of UK hospitals.

Researchers say the findings provide the strongest evidence so far of the patient benefit of robot-assisted surgery and are now urging National Institute of Clinical Excellence (NICE) to make it available as a clinical option across the UK for all major abdominal surgeries including colorectal, gastro-intestinal, and gynaecological.

“In this study we wanted to establish if robot-assisted surgery, when compared to open surgery, reduced time spent in hospital, reduced readmissions, and led to better levels of fitness and quality of life; on all counts this was shown.

“An unexpected finding was the striking reduction in blood clots in patients receiving robotic surgery; this indicates a safe surgery with patients benefiting from far fewer complications, early mobilisation and a quicker return to normal life.”

Co-Chief Investigator Professor James Catto, Professor of Urological Surgery at the Department of Oncology and Metabolism, University of Sheffield, said: “This is an important finding. Time in hospital is reduced and recovery is faster when using this advanced surgery.

“Ultimately, this will reduce bed pressures on the NHS and allow patients to return home more quickly. We see fewer complications from the improved mobility and less time spent in bed.

“The study also points to future trends in healthcare. Soon, we may be able to monitor recovery after discharge, to find those developing problems. It is possible that tracking walking levels would highlight those who need a district nurse visit or perhaps a check-up sooner in the hospital.”

“Previous trials of robotic surgery have focused on longer term outcomes. They have shown similar cancer cure rates and similar levels of long term recovery after surgery. None have looked at differences in the immediate days and weeks after surgery.”

Open surgery remains the NICE “gold standard” recommendation for highly complex surgeries, though the research team hope this could change.

Professor Kelly added: “In light of the positive findings, the perception of open surgery as the gold standard for major surgeries is now being challenged for the first time.

“We hope that all eligible patients needing major abdominal operations can now be offered the option of having robotic surgery.”

Rebecca Porta, CEO of The Urology Foundation said: “The Urology Foundation’s mission is simple - to save lives and reduce the suffering caused by urological cancers and diseases. We do this through investing in cutting-edge research, leading education and supporting training of health care professionals to ensure that fewer lives will be devastated.

“We are proud to have been at the heart of the step change in the treatment and care for urology patients since our inception 27 years ago, and the outcomes of this trial will improve bladder cancer patients’ treatment and care.”

Bladder cancer is where a growth of abnormal tissue, known as a tumour, develops in the bladder lining. In some cases, the tumour spreads into the bladder muscle and can lead to secondary cancer in other parts of the body. About 10,000 people are diagnosed with bladder cancer in the UK every year and over 3,000 bladder removals and reconstructions are performed. It is one of the most expensive cancers to manage.

A further 20 secondary outcomes were assessed at 90 days, six- and 12-months post-surgery. These included blood clot prevalence, wound complications, quality of life, disability, stamina, activity levels, and survival (morbidity). All secondary outcomes were improved by robot-assisted surgery or, if not improved, almost equal to open surgery.

This study, and previous studies, show both robot-assisted and open surgery are equally as effective in regards cancer recurrence and length of survival.

The research team is conducting a health economic analysis to establish the quality-adjusted life year (QALY), which incorporates the impact on both the quantity and quality of life.

John Hammond, retired, age 75, from Doncaster, said: "I left my symptoms too long, and found out that I had a tumour in the bladder. I was lucky to see Professor Catto and after being given options, I chose the operation to have my bladder removed and a stoma in place.

"I had the operation in August 2019 and was aware that it was robotic surgery in a trial and was keen to take part; in fact I was pleased to be in a position to help anybody else in the future with this type of surgery. The operation was successful, and the whole team was hugely supportive.

"Amazingly, I was walking the next day and progressed excellently, improving my walking each day. I was in no pain and just had to adjust to the stoma bag. I have fully recovered from the operation and throughout I knew I was in professional hands. I was home about five days after surgery and am grateful to Professor Catto and his team that I did not have to stay in hospital for longer than necessary."

Frances Christensen Essendon, from Hertfordshire, said: “I was diagnosed with bladder cancer and after a course of chemotherapy it was suggested that I have my bladder removed. Under Professor John Kelly I underwent robotic surgery to remove my native bladder which was replaced with a new bladder made out of bowel. The operation was a success, and I was up and walking soon after surgery. Having had the operation in April I was back to work and the gym in the middle of June. I have gone on to lead a normal active life and am eternally grateful to Prof Kelly and his team for their care and support.”