A blue plaque celebrating the life and achievements of transatlantic abolitionist and women’s rights activist Sarah Parker Remond has been unveiled in Bloomsbury, London. 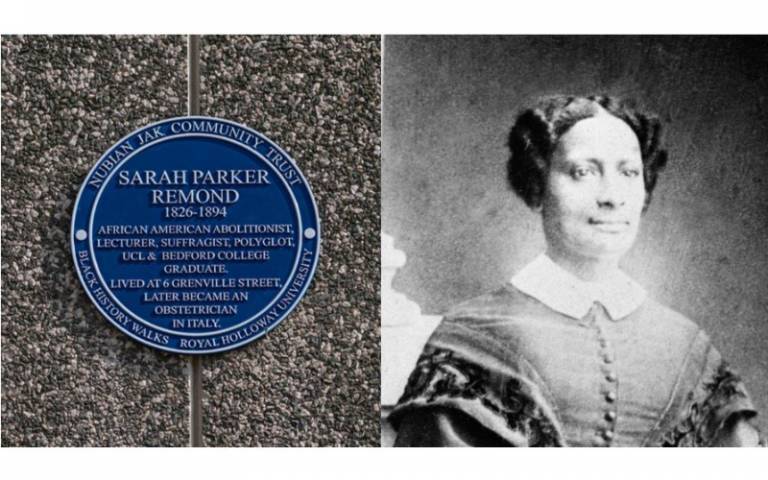 Produced by the Nubian Jak Community Trust, the plaque is sponsored by Black History Walks and supported by UCL’s Sarah Parker Remond Centre.

The plaque is situated on Grenville Street, near Brunswick Square Gardens, and was unveiled on Friday 25 March, with several dedicated speeches to Remond’s life, work and legacy.

Commenting Professor Paul Gilroy, Founding Director of UCL Sarah Parker Remond Centre, said: “It is wonderful that a new generation of students will have the chance to learn about Sarah Parker Remond’s amazing achievements. I like the idea of people passing the plaque and scurrying home to find out who she was and why we should remember her.”

Her lectures took her around America, the UK and Europe, where she became a well-known figure and agent of change in the anti-slavery movement. Her entire family was dedicated to the abolition of slavery and their home was a meeting point for black and white abolitionists.

In 2020 the UCL Centre for the Study of Racism & Racialisation, was renamed the UCL Sarah Parker Remond Centre, both recognising her achievements and continuing her legacy by providing a focal point for scholarship, teaching and public engagement activities that seek to address the various problems of racial inequality and hierarchy.

Tony Warner, Director of Black History Walks, said: "Sarah Parker Remond's plaque, 160 years after her studies in Grenville Street, are a welcome and long overdue addition to the university environment."

Sarah Parker Remond was born in Salem, Massachusetts in 1826, and was one of ten children.

Massachusetts was by this time a ‘free state’ and centre of the abolition movement. The Remond family owned a successful catering and hairdressing business and Nancy, Remond's mother, was a major influence on her life.

She was largely self-educated and took advantage of a house full of books and newspapers, many from the Anti-Slavery Society which members of her family were active in.

In 1859 Remond moved to England and, as a notable and effective abolitionist campaigner, she became the first woman to lecture publicly against slavery. Eventually, she settled in London’s Holland Park where she became active in a range of radical social movements.

Remond studied languages and liberal arts at Bedford College before changing direction and enrolling at London University College from where she studied as a nurse in 1865. She relocated to Italy in 1866 and took the habilitation examination to become an obstetrician in 1868.

Remond married an Italian and practised medicine in Rome for the duration of her life.

Remond was not only a dynamic political voice against racial hierarchy and gender inequality but also a woman of science and medicine. Her life reveals an interesting history of the ways in which the pursuit of civil and political rights and citizenship by black people have been connected to the acquisition of rights and recognition by women.