A UCL-led international trial exploring the effectiveness of tuberculosis (TB) treatment in children has led to a change in the World Health Organisation’s global guidelines for managing the disease. 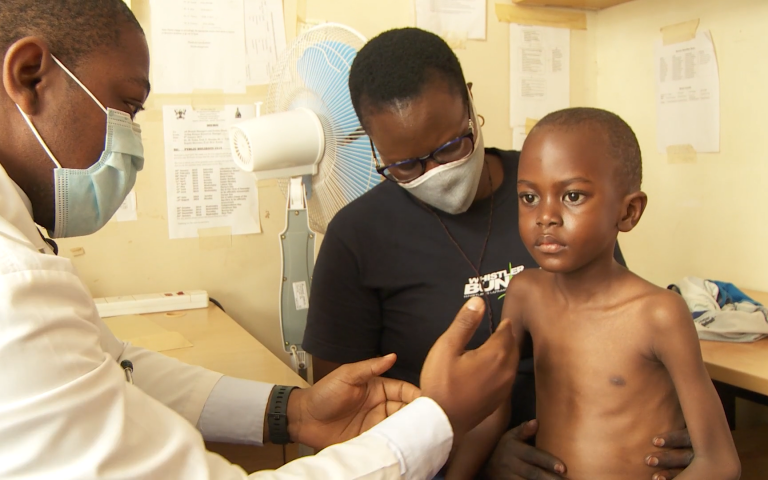 The research, published in The New England Journal of Medicine, found that the treatment duration for the majority of children with drug sensitive tuberculosis can be shortened from six to four months, thereby reducing the burden on families and healthcare systems around the world.

Principal Investigator, Professor Diana Gibb (MRC Clinical Trials Unit at UCL) said: “It is estimated that nearly one quarter of children with TB die, but the vast majority (90%) die because they are not diagnosed and started on treatment. A shorter treatment for children with non-severe TB allows savings of on average $17 (£12) per child, which can be used to improve the screening coverage and find the missing children with TB.”

Researchers from the MRC Clinical Trials Unit at UCL worked with partners in South Africa, Uganda, Zambia and India on the SHINE study, the first randomised control trial to assess whether children with ‘minimal’ TB could be effectively treated with a shorter course of treatment.

Minimal tuberculosis is non-severe lung or lymph gland TB, where the TB bacteria cannot easily be found in the sputum through smear microscopy (smear negative). In 2020 an estimated 1.1 million children fell ill with TB globally, and unlike adult patients, most of them (approximately two thirds) had a non-severe form of the disease.
Yet despite children being more likely to have minimal TB, until now their treatment length has been based on the results of trials in adults, requiring six months of a combination of daily medicines. As children on TB treatment often stay home from school, this also increases the burden on caregivers.
The SHINE team found that treatment for four months using the same standard medicines was as beneficial as a six-month treatment course for children with minimal TB.
Spending less time on treatment will mean fewer clinic visits, as well as making it easier to complete the full course of medicine. Savings to TB programmes can instead be spent on improving access to screening and diagnostic tests for the disease, which can be poor at lower-level health facilities, as well as on training health care workers.
First author, Dr Anna Turkova (MRC Clinical Trials Unit at UCL) said: “People think that a child with TB must be very sick – that’s not true. It is known that two-thirds of children who fall ill with TB every year have non-severe TB and therefore could be treated with shorter treatment.”
The trial involved 1,204 children aged from two months up to 16 years with non-severe TB, who were divided randomly into two groups to take either four or six months of treatment with anti-TB medicines. Of the enrolled children, 11% were living with HIV. All children were followed for 18 months after enrolment to see whether their treatment had been successful.
The results clearly showed that children who received the shorter course did as well as those on the standard six-month treatment, regardless of the age group, country or HIV status, with few and similar side effects in both groups.
The evidence from SHINE was reviewed by the World Health Organisation Guidelines Development Group, who recommended in August 2021 that in children and adolescents with non-severe, presumed drug susceptible TB, a four-month regimen should be used rather than the standard six-month regimen. Important considerations about how to determine eligibility for the shorter treatment regimen will be described in WHO’s full consolidated guidelines coming out in March 2022 and in the operational handbook.
Lead investigator at the Zambian trial site, Dr Chishala Chabala (University Teaching Hospital, Lusaka, Zambia), said: “Children are often presenting with mild disease. If they are diagnosed on time, they can now be treated with a shorter course. The SHINE results are an opportunity to improve treatment of children with TB.”
Trial paediatrician Dr Priyanka Anand Kulkarni (B.J. Medical College, Pune, India) added: “For parents it’s very challenging to manage the pill burden and to motivate kids to complete the full duration of treatment. The short treatment course can make it more manageable.”
Children living with HIV who also have TB face problems of having to take treatment for both diseases, which complicates HIV treatment options. The shorter TB treatment will help to reduce these issues.
While undertaking the trial, training and community education helped to diagnose children with mild TB. The SHINE team is now working with its South African partners to improve ways of identifying children with the disease. They hope to explore use of artificial intelligence to read chest radiographs and help clinicians distinguish between severe and non-severe cases.
The SHINE trial was funded by the Joint Global Health Trials scheme, including the Department for Health and Social Care, the Foreign, Commonwealth and Development Office, the Medical Research Council and the Wellcome Trust. This UK-funded award is part of the EDCTP2 Programme supported by the European Union.
Jill Jones, Head of Global Health Strategy at the Medical Research Council said: “It’s fantastic to see that the trial results from this study have already been taken up in WHO TB guidelines.
“TB remains a major health burden for children and so reducing treatment time by two months will have a major impact on the health and wellbeing of children affected by TB.”
Additional partners included Stellenbosch University, South Africa; University of Cape Town, South Africa; National Institute for Research in Tuberculosis, India; Radboud University Medical Center, the Netherlands; International Union Against Tuberculosis and Lung Disease, France; University of Melbourne, Australia; University of York; Imperial College London and University Hospitals Birmingham.