London’s iconic underground map has been redesigned for International Women’s Day, with the names of Tube stations replaced with those of notable women and non-binary people, with an interactive digital version created by UCL experts. 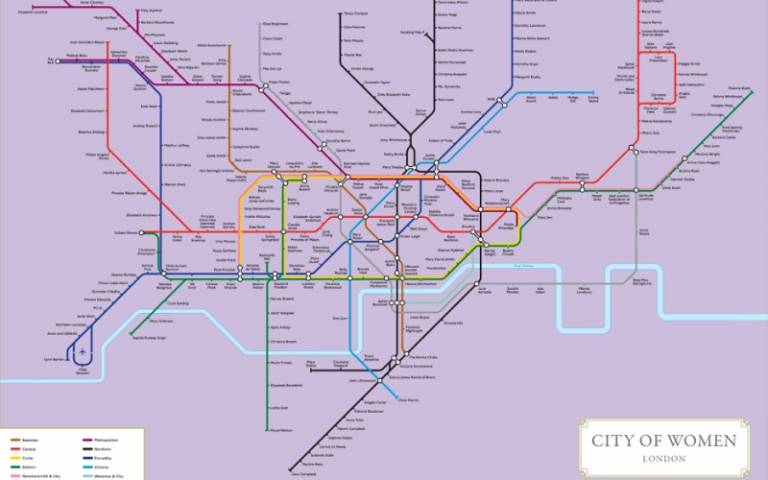 Led by writer Reni Eddo-Lodge and actor Emma Watson, who worked with writer and activist Rebecca Solnit and partnered with Transport for London (TfL), the project – called City of Women – draws from figures in arts, sports, activism, science, media, law, medicine and beyond.

The digital version, led by Dr Leah Lovett (UCL Centre for Advanced Spatial Analysis), allows people to learn more about each person and their lives. The online map launches with featured biographies and interviews from contemporary women and non-binary people.

Those linked to UCL include Honorary Professor Baroness Hale, who replaces St James Park, cricketer Ebony Rainford-Brent, who replaces Oval, Olympic athlete Christine Ohuruogu who replaces Elm Park, and Andria Zafirakou, a teacher and founder of the charity Artists in Residence who won the Global Teacher of the Year award in 2018, and replaces Alperton.

Dr Lovett said: “It’s been a privilege for us as researchers to engage with the stories of the women and non-binary people included on this map. The stories are inspirational and give a rich picture of the myriad ways that the lives represented here have contributed to shape London.

“Our hope is that the interactive map will invite a deeper exploration of local heritage and the layered history of this city. With Memory Mapper we are also handing over the tools for people to map the stories of places that are significant to them.”

Historic UCL people include scientist Kathleen Lonsdale, replacing Hatton Cross, whose groundbreaking research in crystallography was conducted at UCL during World War II. She was the first woman to be elected a Fellow of the Royal Society and the first female President of the British Association.

The interactive map was developed by Dr Duncan Hay (UCL CASA) using Memory Mapper software, an open-source web application he developed which builds upon The Bartlett's research into mapping cultural heritage. The biographies were written by Dr Lovett, Montaz Marché and Dr Hay.

Dr Hay said: "Memory mapper is designed to allow people to explore the relationship between history and place. We're so pleased that we've been able to use Memory Mapper to enrich the fantastic map that Reni, Rebecca, Emma and the team at Haymarket Books have created, and hope that it becomes a living archive for these remarkable stories."

The London project is inspired by Rebecca Solnit and Joshua Jelly-Schapiro’s book Nonstop Metropolis, in which they reworked the New York City subway map to celebrate women who had made their mark on the city. The map inspired Emma Watson to collaborate with Reni Eddo-Lodge and Solnit on a version for London.

Reni Eddo-Lodge said:  "As a Londoner, I've walked the streets of this city for decades, not conscious of the fact that so many of the city's place names have a fascinating etymology. These iconic places are named after pubs, and parks, gates and members of the monarchy, but I was excited to give the map a feminist refresh. Our map switches the focus to women and non-binary people, contemporary and historic, who have made indelible marks on the city's trajectory.  I hope it helps you think about your surroundings differently!"

Marcia Williams, Transport for London’s Director of Diversity, Inclusion and Talent, said: “This wonderful reimaging of our iconic London Tube map reminds us of just how much of everyday life is gendered, and in a way that historically underplayed the impact of women and non-binary people in shaping the world around us. I'm delighted that this project celebrates these pioneers (including some of our own transport heroes) and brings their stories into the light and literally puts them on the map for everyone to rediscover.”

The digital map was supported by the Engineering Physical Sciences Research Council, UCL Grand Challenges and the UCL Centre for Critical Heritage Studies. UCL Knowledge Exchange & Innovation funding enabled the use of innovative digital technologies to give historical and narrative context to the print version of the map.

Debbie Weekes-Bernard, Deputy Mayor for Communities and Social Justice, said: “The City of Women map is a wonderful celebration of the contribution women and non-binary people have made to our city. It invites Londoners and visitors to learn more about amazing women, past and present, who have inspired us, encouraged us and changed the world we live in. This is a great way to mark International Women’s Day – an important day when we mark the achievements of women across the world.”

Rebecca Solnit said, “Throughout the world, most places that are named after people are named after men, amplifying male roles and deeds and erasing women and girls all over again. In 2016 I co-created a map that renamed every subway stop in New York after a significant woman from that city, and Emma Watson was so smitten with that map that she brought Reni Eddo-Lodge on board to lead a project to do the same with London’s famous Tube map. We are delighted to put City of Women London out this spring and further the conversation about visibility and representation as they relate to gender, and we hope it launches a million conversations about what places have been and what they could be.”