Calculating a person’s risk of developing prostate cancer using results from two blood markers would improve the accuracy of screening for the disease, reports a new study led by a UCL researcher. 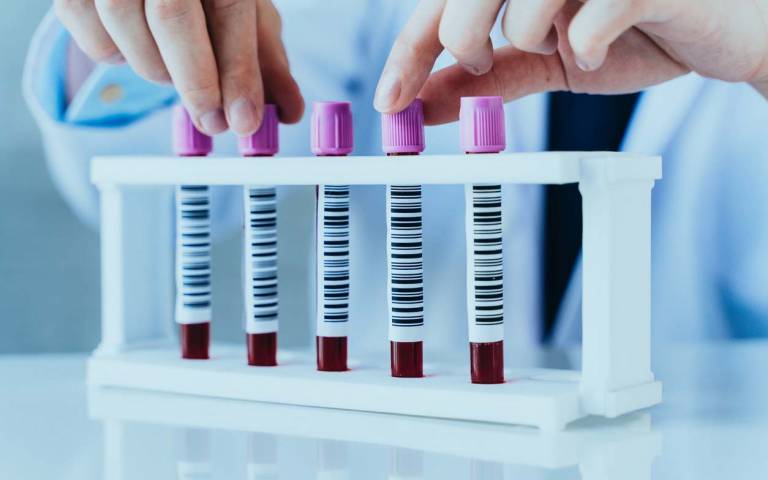 Prostate cancer is the most common form of cancer in men, with more than 10,000 men dying from the disease every year in the UK, but there is currently no national screening programme.

That is partly because the current best first-line test - a blood test that detects raised levels of the prostate-specific antigen (PSA) - is not wholly reliable, missing some harmful cancers as well as giving false positives. False positives include not just false alarms where there is no cancer but the discovery of harmless cancers that are unnecessarily treated.

In a new study, published in the Journal of Medical Screening, researchers developed an algorithm estimating a person’s risk of developing prostate cancer based on age and the levels of two prostate cancer markers, PSA and hK2 (human kalliknein peptidase).

They tested how well the algorithm could predict prostate cancer by comparing blood samples of men who later died after a prostate cancer diagnosis with those who were never diagnosed with the disease.

They found that, by setting a risk threshold above which men are counted as “screen positive”, the approach would reduce the number of false positives by three quarters compared to a standard PSA test, while catching the same proportion of cancers.

Lead author Professor Sir Nicholas Wald (UCL Institute of Health Informatics) said: “A key drawback of screening for prostate cancer using a PSA test alone is the higher risk of a false positive, which can lead to an unnecessary, invasive biopsy and the unnecessary treatment of a clinically insignificant cancer that would not have caused harm anyway.

“Our study shows a different screening approach could reduce the number of false positives by three quarters. This would make screening for prostate cancer safer and more accurate, reducing overdiagnosis and overtreatment.

“The next step is to test the feasibility of this approach in practice with a pilot project inviting healthy men for screening. If the project is successful, we believe this approach ought to be considered as part of a national screening programme for all men.”

Co-author Jonathan Bestwick (Queen Mary University of London) said: “The approach is innovative for cancer, as it screens people on the basis of their overall risk rather than the results of a single test. This is the same approach used in screening during pregnancy for certain fetal and maternal health conditions.”

Professor Roger Kirby, President of the Royal Society of Medicine and Vice-President of Prostate Cancer UK, who was not involved in the study, said: “This is a novel approach which utilises the levels of two prostate cancer markers, PSA and hK2 (human kallikrein peptidase) to refine prostate cancer screening. The use of PSA alone has significant drawbacks in terms of screening, but the addition of the hK2 marker in this context carries the genuine promise of significantly reducing the death rate from this most common cancer in men.”

For the study, the researchers looked at data and blood samples from more than 21,000 men recruited into the prospective BUPA study over 40 years ago.

They analysed a number of prostate cancer markers in blood samples of 571 men who later died from or with prostate cancer, comparing these with a control group of 2,169 men who were never diagnosed with the disease.

They noted that while hK2 was a relatively weak marker for prostate cancer on its own, it was relatively independent of PSA so the two together yielded a more accurate test.

They categorised the results of the total PSA and hK2 tests based on how far away from average they were according to the participant’s age. They also included age into their assessment of risk.

All men who were estimated to have a one in 20 or greater risk of developing prostate cancer in the next five years were counted as “screen positive”.

The researchers found that if men aged 55 and over were screened at least five yearly using this risk cut-off, 90% of cancer cases would be detected, with only 1.2% of cases being false positives.

If a PSA test had been used to screen for the disease on its own, in one scenario modelled by the researchers, an 86% detection rate would have been accompanied by a false positive rate of 2%. By comparison, if the risk-based approach had been adjusted to have a detection rate of 86%, the false positive rate would have been 0.5% - a reduction of three quarters.

Professor Wald is one of a number of researchers at UCL seeking to improve how prostate cancer is detected and screened.

In 2019, findings from the PRECISION trial, led by Professor Caroline Moore (UCL Division of Surgery and Interventional Science), resulted in new National Institute of Clinical Excellence (NICE) guidance that all men with a positive PSA result should have an MRI scan prior to biopsy. This step has been shown to preserve the detection of aggressive cancers whilst reducing over-diagnosis and unnecessary treatment of insignificant cancers.

In the latest study, researchers also found that men’s PSA levels were significantly elevated up to 30 years before a prostate cancer diagnosis, suggesting that a cause of prostate cancer plays a role long before it is diagnosed. However, the levels of PSA are not elevated enough to be useful in screening this far ahead of disease diagnosis.