Mini particle accelerator a step closer to being realised

Mini particle accelerators are a step closer to being realised after a new study co-led by UCL researchers showed it would be possible to accelerate millions of bunches of electrons per second using plasma waves. 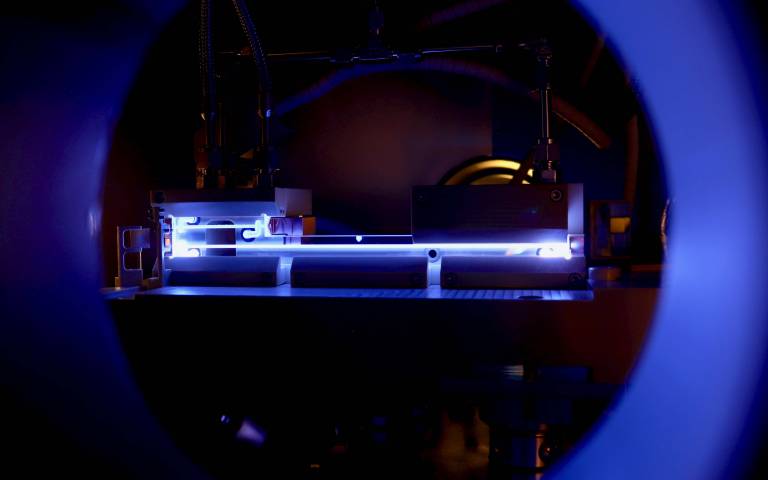 The technique involves a high-energy laser or particle beam being fired into a cylinder of plasma – a soup of ionised atoms – creating waves like those produced by a speedboat in water. Bunches of electrons are fired into the plasma straight after, ’riding’ the newly created plasma waves and being accelerated to very high energies quickly.

The technique has the potential to drastically reduce the size of particle colliders (for instance the Large Hadron Collider, which accelerates protons, is 27km long) and free-electron lasers, used to probe the structures of materials and processes, as the cylinder in which the electrons are accelerated are typically just a few centimetres long.

For most applications of the technology, thousands or millions of bunches of electrons need to be accelerated per second, but, given that the plasma needs to settle to close to its original state each time a new bunch is fired in, it was uncertain if this high repetition rate was possible.

In the new study, published in Nature, the team of researchers accelerated electrons at the FLASHForward facility at the German Electron Synchrotron (DESY) in Hamburg to investigate how quickly the plasma returned to a settled state, finding it did so in 63 nanoseconds.

Co-author Professor Matthew Wing (UCL Physics & Astronomy) said: “This result is positive news – it suggests that plasma accelerators could be used to accelerate up to 15 million bunches of electrons a second. This matches the repetition rate of conventional accelerators.”

Co-author Dr James Chappell, formerly at UCL Physics & Astronomy and now at the University of Oxford, analysed the data as part of his PhD thesis, which won the 2022 Culham Thesis Prize for the best thesis in plasma physics from the Institute of Physics. He said: “Current test facilities for plasma acceleration are usually operated at much slower repetition rates, accelerating up to 10 bunches of electrons a second. The potential for a much higher repetition rate is important for turning this into a useful technology.

“One possibility is plasma wave accelerators could be used in next-generation particle physics experiments, to collide electrons and positrons at high speed to unearth new physics. Another is that it could be used for free-electron lasers – this is where high energy electrons radiate photons and these photons are used to probe the structure of all sorts of materials and processes. For both of these applications there are still engineering challenges to overcome – for instance, how we avoid the plasma heating up.”

The researchers also noted that plasma accelerators could be used as “booster stages” in existing facilities such as the European X-ray Free Electron Laser (XFEL) at DESY in Hamburg to increase the energies of trains of particles over short distances. 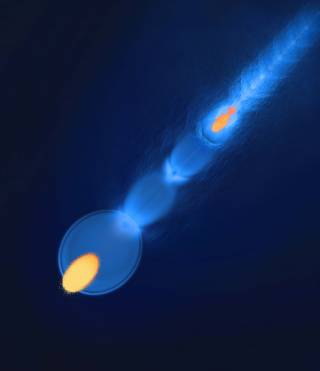 To investigate the plasma recovery time, the research team fired electron bunches into the plasma at different time intervals – from less than a nanosecond to hundreds of nanoseconds apart – and measured the energy of the electrons after they had interacted with the plasma. After 63 nanoseconds, they found, the energy was equivalent to electrons fired into plasma in an undisturbed state.

Dr Richard D'Arcy, first author of the study from DESY and a UCL alumnus, explained: “Unlike in conventional accelerators, where long-living electromagnetic waves stored in a resonating cavity can accelerate several particle bunches in quick succession, the electromagnetic fields generated in plasma decay very quickly after each acceleration process.

“To start a new similar acceleration process, the plasma electrons and ions must then have ‘recovered’ to approximately their initial state such that the acceleration of the next pair of particle bunches is not modified by that of the previous one.”

The study involved scientists from UCL, DESY, and the Universities of Oxford and Hamburg.