UCL has again been ranked among the top 10 universities in the world according to the 2023 QS World University Rankings. 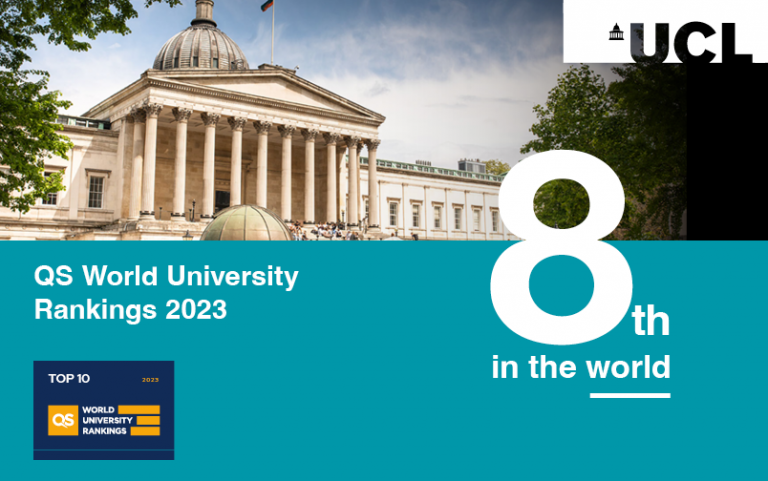 The university secured eighth position for the second year in a row, rising from tenth place in 2021 – putting it in the top one per cent of institutions included in the rankings.

QS is the world’s most-consulted international rankings, now including 1,422 universities - 124 more than in 2022 - making this year the publication's largest ever edition.

On five of the metrics, UCL scored 98.6/100 or higher, with scores of 100 for international students and international research network – standing at second globally for this latter indicator.

Professor Geraint Rees, UCL Vice-Provost (Research, Innovation and Global Engagement), said: “It’s great that UCL continues to be recognised as one of the world’s top 10 universities. I'd like to extend my congratulations to UCL’s entire community, whose hard work and commitment together makes us what we are.

“It’s particularly gratifying to see the strength of our global engagement recognised; across the world we have built diverse research and innovation partnerships with other universities, commercial partners, community organisations and many others. While metrics alone cannot be the sole measure of a university and our impact, it is very rewarding to see UCL maintain its strong position.”

UCL President & Provost, Dr Michael Spence, said: “The dedication and commitment of UCL’s staff and students are reflected in these brilliant results. To be ranked in the top eight universities in the world for the second year running is a remarkable achievement, and to be second in the world on a new metric - international research network – highlights UCL’s particular strength as a fantastic global partner.”

This year’s top ten spots are taken by universities in the UK, US and ETH Zurich in Switzerland. Massachusetts Institute of Technology retained its number one position for the tenth year running.

In April, UCL was named by QS as one of the world’s top universities for the study of 43 subjects, with nine ranked in the global top ten.