New research co-led by scientists at UCL, found that existing drugs modifying the effect of the hormone progesterone, such as mifepristone, could reduce the risk of aggressive "triple negative" breast cancer in women with an alteration of the BRCA1 gene. 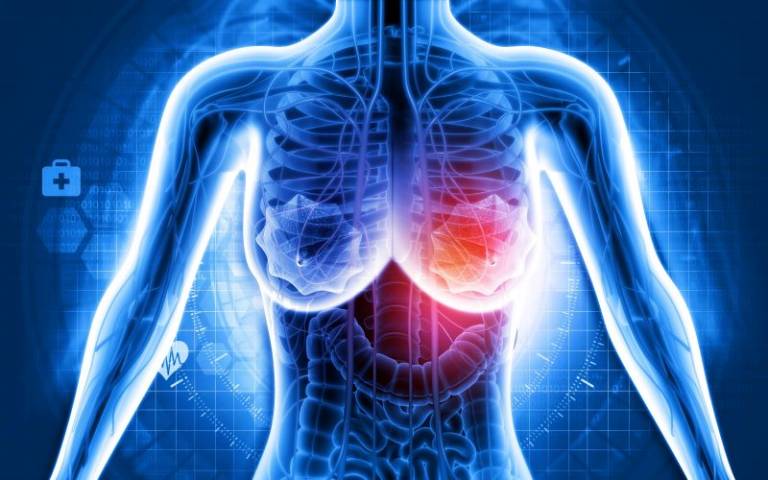 Triple-negative breast cancer (TNBC) is most common in women who have a BRCA1 mutation and this type of cancer affects 13 in every 100,000 women.  Outcomes for those diagnosed with TNBC are poorer because these cancers are more aggressive and more likely to recur than other cancers. Further, the cells making up the cancer do not display common drug targets (oestrogen or progesterone receptors and a protein called HER2) and hence treatment options are limited.

In an initial, pilot study, published in Genome Medicine, scientists conducted a detailed evaluation of progesterone levels in women with a BRCA mutation, and examined the effect of drugs targeting progesterone on the risk of developing breast cancer in women known to be at risk.

In 17 women (9 with a BRCA1 mutation vs 8 without), oestrogen or progesterone levels were measured daily using saliva samples. Researchers found that levels of progesterone were higher throughout the menstrual cycle, and particularly during the luteal phase, in women with BRCA1 gene alterations. Higher levels of progesterone are known to affect breast cancer risk by indirectly acting on the cells from which the cancer originates, causing them to divide more often and so the cancer develops more quickly.

Researchers used cutting-edge technologies to study DNA methylation and identified a ‘signature’ of markers in breast tissue (the WID-Breast29) which can indicate and dynamically monitor progesterone-driven risk of breast cancer.

Researchers then used the WID-Breast29 test on samples taken from the breast (a biopsy) of women who had participated in a clinical trial of a drug that targets progesterone some of whom had a BRCA gene alteration. The drug, called mifepristone, is currently used in a number of therapeutic settings including medical abortion, management of early miscarriage, and Cushing’s Syndrome. It is currently under investigation as a regular contraceptive pill.

Lead author, Professor Martin Widschwendter (UCL EGA Institute for Women’s Health, Universität Innsbruck, Karolinska Institutet) said: “Progesterone is involved in the development of breast cancers with the worst prognoses. In this research, we assessed progesterone levels each day over an entire menstrual cycle and demonstrate that progesterone levels are significantly higher in BRCA1 mutation carriers; carrying this mutation confers a high risk of developing a breast cancer with a poor prognosis.

“Most importantly, we showed that drugs neutralising progesterone activity can reduce the cellular changes driving cancer development in normal breast tissue from young women. We are really excited about the prospects these findings open up for improved breast cancer prevention.”

Women with a BRCA1 gene alteration have a 60-90% lifetime risk of developing breast cancer, and 70% of those who do will get the particularly aggressive “triple negative” breast cancer. Currently BRCA1 alteration carriers are offered drastic and invasive surgery, removing both breasts, to reduce their risk of cancer. However, a mastectomy is major surgery that comes with risks and side effects, such as infection and chronic pain.

As a result, the researchers hope that, after further investigations, the WID-Breast29 test, could one day be used to monitor women’s cancer risk over time and assess whether drug interventions are effective helping women make informed and personalised decisions to reduce their cancer risk.

A large-scale clinical trial will be needed to determine whether use of the progesterone modifying drugs, implemented with personalised treatment regimes, and individualised risk monitoring with the WID-Breast29 can reduce not only cancer cases but also unnecessary surgical interventions.

The pilot project was funded by the European Research Council and The Eve Appeal.

Athena Lamnisos, CEO, The Eve Appeal, said: “Everyone has heard of breast cancer and believe that treatment and outcomes have come on leaps and bounds in recent years. And that’s true with some breast cancer diagnoses – but not for the rarer and more aggressive forms of the disease.

“These new findings could be a game changer for what is currently a brutal diagnosis.”