UCL’s first ever walking tour will give members of the general public a chance to explore our rich and radical history over two centuries while visiting key sites on campus including Jeremy Bentham’s preserved “body”, or Auto-icon. 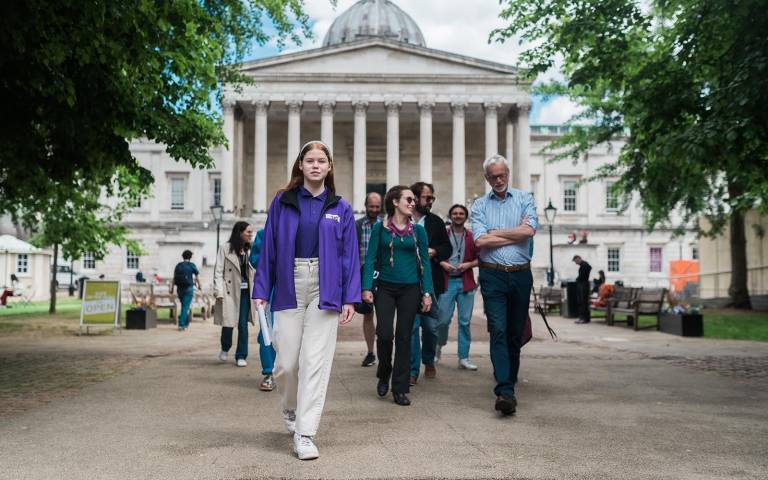 The free tour will be delivered by student ambassadors and will run weekly on Fridays from 12:30 to 13:30, starting from 24 June.

Student guides will delve into UCL’s history – our origins as the first university to admit students regardless of religion, our steps to open up higher education to women on equal terms to men, along with the trailblazers and Nobel laureates who have studied here. The tour also acknowledges troubling elements of UCL’s history such as our links with eugenics.

Among the tour’s key sites are the Wilkins Building, used to depict ancient Rome in the film Gladiator; the Auto-icon of Jeremy Bentham, whose ideas inspired the founding of UCL; a bust of Charles Darwin created by a giant robotic arm; and the Japanese Garden, which celebrates UCL’s link to the founders of modern Japan.

Kirsty Walker, UCL Vice-President for External Engagement, said: “UCL’s first ever public walking tours are every bit as radical and thought-provoking as our rich and radical 200-year history. No other tour takes in sights such as the Wilkins building and preserved Auto-icon of philosopher Jeremy Bentham alongside fascinating stories about Nobel laureates, the founders of modern Japan and a jar of preserved moles. We are proud that all our tours will be delivered by our amazing students who will bring alive tales of UCL’s history alongside their own perspective of life at the university today.”

Guides will also explore the quirkier, less well known aspects of the campus, from the jar of preserved moles kept at the Grant Museum to the thousands of bone fragments and ancient jar of Bovril unearthed during the construction of the Main Quad.

The students have been trained by a Blue Badge Tourist Guide and will draw from source material developed in collaboration with a panel of UCL academics.

The tour is the only tour of its kind to be offered by a London university. It will start at North Lodge Welcome Point, located at the entrance of the Main Quad. The newly opened Welcome Point is run by student ambassadors and is open to all, seven days a week.