A new CAR T-cell therapy developed by scientists at UCL has fewer ‘toxic’ side-effects and is more durable, targeting and killing cancer cells for longer, concludes a Phase I clinical trial of patients at University College London Hospitals (UCLH). 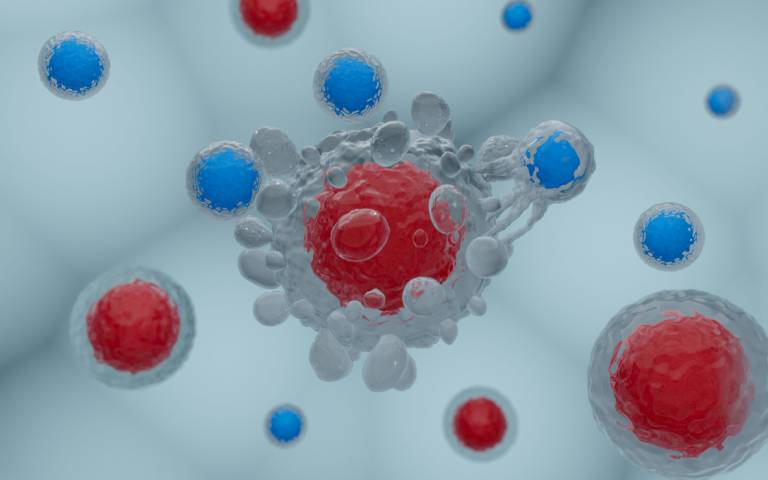 Researchers say the findings offer new hope to adult patients with ‘relapsed B-cell acute lymphoblastic leukaemia’ (r/r B-ALL), for which there is currently no approved ‘curative’ treatment available. Patients typically have further chemotherapy and the prognosis is poor.

For the ALLCAR19 trial, published in the Journal of Clinical Oncology, 20 adult patients with relapsed B-ALL had their own T cells genetically modified with CAT-41BB-Z, a new type of CD19* CAR, which has been named obe-cel.

“The immune system can become over-activated causing a toxic reaction called ‘cytokine release syndrome’; another consequence of over-activation is that the engineered T-cells become immunologically exhausted and no longer persist in the patient’s body. This lack of persistence can allow the cancer to relapse.

"These two problems have proven to be particularly difficult in adults with relapsed B-ALL and consequently there is no licensed CAR T-cell therapy in this age group for this type of cancer.”

Obe-cel has been designed so that CAR T-cells bind with the target leukemic cancer cells less tightly and for shorter periods than other CD19CARs. This shortens the time of interaction, limiting over stimulation of the CAR T-cells, and they move between killing one leukaemia cell, then on to the next, thereby reducing over-exhaustion. This new type of therapy design is known as a “fast off-rate CAR”.

Scientists hoped this design would reduce cytokine release syndrome toxicity and allow the CAR T-cells to divide, grow and live in the patient for months to years to prevent relapse.

Results of Phase I trial

In the ALLCAR19 trial modified obe-cel was used to treat 20 adult patients with relapsed B-ALL at UCLH.

Obe-cel was shown to have an excellent safety profile with none of the patients having cytokine release syndrome.

In regards durability, the CAR T-cell levels remained high in patients and persistence was evident in 75% patients at a median of six months.

Of the 20 patients, 85% were in complete remission at one month. Furthermore, the CAR T cells persisted well in nearly all patients and 50% remained in remission at 12 months.

Trial investigator, Dr Claire Roddie, Associate Professor at UCL Cancer Institute and consultant haematologist at UCLH, said: “This new type of CD19 CAR is designed so the interaction between CAR T-cell and target cancerous cell is faster than with standard CD19 CARs.

“As both scientists and doctors, we are delighted with the results; they are important because they show the new C19 CAR design allows for the safe treatment of CAR T-Cell therapy to adult patients with relapsed B-ALL. Moreover, this treatment may allow patients to have long-term remissions with no other treatment.”

Based on the success of the ALLCAR19 study, Autolus Therapeutics (Nasdaq: AUTL), a spin-off company from UCL, has initiated the FELIX study, a phase Ib/II global registration study of obe-cel in adults with relapsed B-ALL.

The FELIX trial has a Phase Ib component prior to proceeding to a single arm Phase II clinical trial. The primary endpoint is overall response rate, and the key secondary endpoints include molecular complete remission rate, duration of response, and safety. The trial is designed to enroll approximately 100 patients across 30 of the leading academic and non-academic centers in the United Kingdom (including UCLH), Europe and the United States.

The ALLCAR19 trial is sponsored by UCL, funded by the NIHR i4i scheme and Autolus Therapeutics and supported by UCLH and the NIHR UCLH BRC.

Claire Evans was diagnosed with Acute Lymphoblastic Leukaemia (ALL) in June 2015 and received treatment at her local hospital. This included a bone marrow transplant in December 2015, and she went into remission.

In May 2019, after she had been in pain for some time due to pressure fractures in the spine, she was referred to hospital for an MRI scan in August 2019 and doctors found that her leukaemia had returned.

Options were explored and she was eventually referred to UCLH for inclusion on the ALLCAR19 clinical trial. She had two infusions in November 2019 and was discharged from UCLH in December 2019. Her follow up care takes place at her local hospital. In November 2021 and it will be 24 months post CAR T and her latest follow up (in Nov 2021) showed she remains in remission.

Claire said: “I first heard about CAR-T after watching the documentary ‘War in the Blood’. I'd previously been diagnosed with leukaemia in 2015 and was in remission but I suffered a relapse in 2019. The doctors initially treated me with chemotherapy before one of them mentioned CAR-T and I was referred to UCLH who assessed me for participation in their clinical trial.

“As I was deemed suitable, I was able to start CAR-T treatment fairly quickly. I'd been made aware that the side effects could be very unpleasant but fortunately for me, I didn't have any adverse effects.

“I'm so glad that I was able to take part in the trial, it has made all the difference and I'm still here. The initial results from my latest biopsy show no evidence of disease.”