The Dark Energy Spectroscopic Instrument (DESI), designed and built in part by UCL physicists, has created the largest and most detailed 3D map of the universe, cataloguing 7.5 million galaxies in seven months. 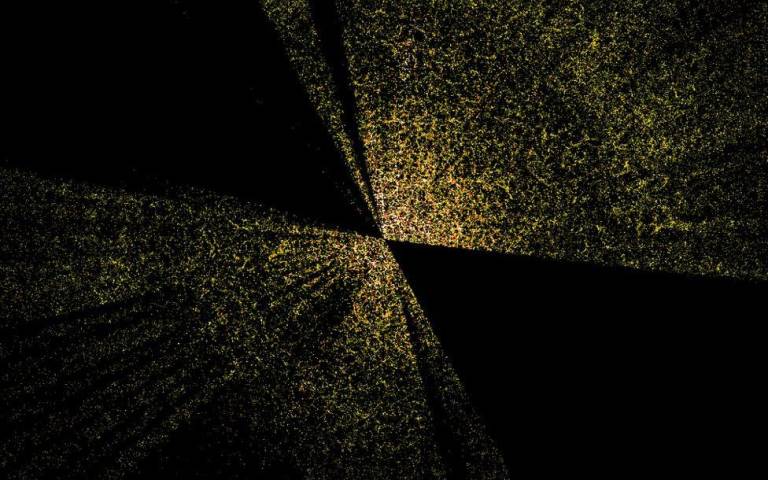 Once its five-year mission is finished, a phenomenally detailed 3D map will yield a better understanding of dark energy, and the universe’s past and future.

The instrument, based at Kitt Peak National Observatory near Tucson, Arizona, in the United States, contains 5,000 fibre-optic “eyes”, each of which can image a galaxy in just 20 minutes. By the end of its run in 2026, DESI is expected to have over 35 million galaxies in its catalogue.

Professor Ofer Lahav, (UCL Physics & Astronomy), chair of the DESI UK consortium of seven universities, said: “It is remarkable that DESI has collected already millions of galaxy spectra – more than the combined output of all previous spectroscopic surveys. This survey will go deeper into space and the history of the universe than we have ever achieved before, and follows years of efforts of building DESI by the international collaboration, including by UCL’s  instrumentation team.”

DESI is mounted on a four-metre telescope whose top end contains DESI’s optical corrector, which Professor David Brooks and Professor Peter Doel (both UCL Physics & Astronomy) helped design, assemble and build. This corrector, which houses six lenses, the largest 1.1m across, reflects light on to the fibre-optic “eyes” that move independently to capture light from individual galaxies. It also expands the telescope’s viewing window by about 16 times.

Professor Doel said: “I'm very pleased that the performance of the DESI instrument has met our highest expectations and the quality and quantity of the data is truly amazing.

DESI’s primary task is collecting colour spectrum images of tens of millions of galaxies across more than a third of the entire sky. By breaking down the light from each galaxy into its spectrum of colours, DESI can determine how much the light has been redshifted – stretched out toward the red end of the spectrum by the expansion of the universe during the billions of years it travelled before reaching Earth.

It is those redshifts that let DESI see the depth of the sky. The more redshifted a galaxy’s spectrum is, in general, the farther away it is.

With a 3D map of the cosmos in hand, physicists can chart clusters and superclusters of galaxies. Those structures carry echoes of their initial formation, when they were just ripples in the infant cosmos. By teasing out those echoes, physicists can use DESI’s data to determine the history of the universe’s expansion

Today, about 70% of the content of the universe is dark energy, a mysterious form of energy that is accelerating the expansion of the universe. By seeing how dark energy has behaved in the past, DESI can answer questions about the universe’s future. And by comparing the expansion history with the growth history, cosmologists can check whether Einstein’s theory of general relativity holds over these immense spans of space and time.

Professor Amelie Saintonge (UCL Physics & Astronomy) is among astrophysicists analysing DESI data. She said: “DESI will be transformative in allowing us to connect the galaxies we can see with all our telescopes with that dark matter scaffolding.

“With that information, we will be in a much better position to figure out fundamental questions about the universe, such as how dark energy is driving its expansion.”

Primary funding for the construction and operation of DESI comes from the US Department of Energy's Office of Science.  In the UK, DESI receives funding from the Science and Technology Facilities Council (STFC). The DESI collaboration involves hundreds of scientists around the world and is managed by the US Department of Energy's Lawrence Berkeley National Laboratory (Berkeley Lab).