A team co-led by UCL researchers has substantially increased the efficiency of a new type of solar cell, potentially paving the way for its use as a low cost, environmentally friendly alternative to existing solar power technology. 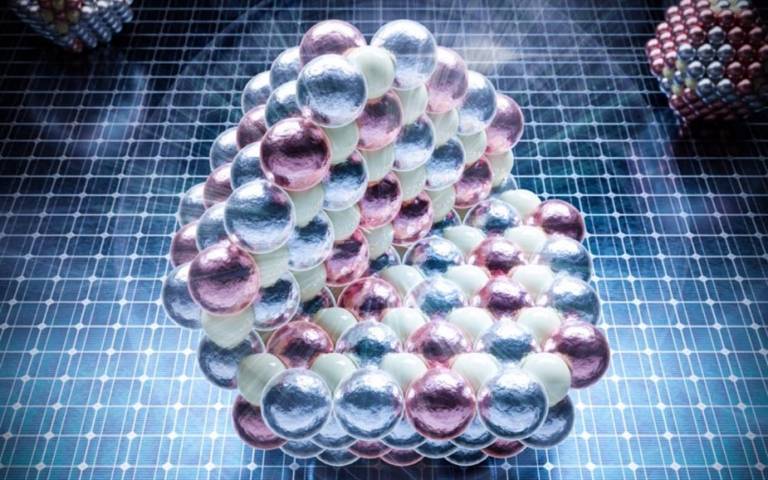 Standard solar cells are silicon-based, but they are bulky, expensive and energy intensive to produce. Current ultrathin alternatives, which can be applied to windows and can generate energy while allowing visible light in, are mainly composed of toxic elements such as lead or cadmium, or contain scarce elements such as indium or tellurium.

In a new study, published in Nature Photonics, the research team investigated how to improve the efficiency of a newer type of solar cell, made from nanocrystals containing two kinds of metal atoms – silver and bismuth.

Using complex computer modelling, researchers at UCL found that an even, 50/50 spread of silver and bismuth atoms across the material increased how much light the nanocrystals absorbed, allowing more energy to be generated.

Colleagues at ICFO in Spain fabricated ultrathin solar cell material (100 nanometres or one 10,000th of a millimetre thick), heating up the nanocrystals to ensure a more even spread of metal spheres, and recorded a power conversion efficiency of more than 9% (that is, more than 9% of the energy input from sunlight was converted into electricity). While this may not seem enormous, the maximum physically-possible solar cell efficiency is 30%, so this is a major result.

PhD researcher Seán Kavanagh (UCL Chemistry and Imperial College London), co-first author of the paper, said: “We are thrilled that our computational modelling helped increase the performance of these bismuth-based solar cells to such an extent.”

“The results show how our research, looking at the underlying chemistry and physics of materials, can help in the design of high-performance, low-cost devices and support a green economy.”

The calculations were based on quantum mechanical models and required massive computing power – some calculations were performed on more than 10,000 CPUs (central processing units) in a network running simultaneously for 24 hours.

As well as consisting of non-toxic, earth-abundant elements and being cheap to produce, the bismuth-based nanocrystals have proven to be very stable, the researchers say, avoiding degradation of the cell over long periods of time.

Co-author Professor Gerasimos Konstantatos of ICFO said: “The devices reported in this study set a record among low-temperature and solution processed, environmentally friendly inorganic solar cells in terms of stability, form factor and performance. We are thrilled with the results and will continue to proceed in this line of study to exploit the intriguing properties [of the precisely engineered nanocrystals] in photovoltaics as well as other optoelectronic devices.”

Seán Kavanagh is a third-year PhD candidate supervised by Professors David Scanlon (UCL Chemistry) and Aron Walsh (Imperial College London), both co-authors on the paper. Professor Scanlon said: "Atomic disorder (atomic site swapping) on the metal sites in solar cell absorber materials is normally associated with loss in device performance. In this study we demonstrate that certain types of disorder are actually beneficial for performance, allowing us to realise a world record efficiency, and potentially opening up new directions for solar cell research. This work highlights once again the power of combining predictive density functional theory calculations and experiments to gain insight into materials properties." 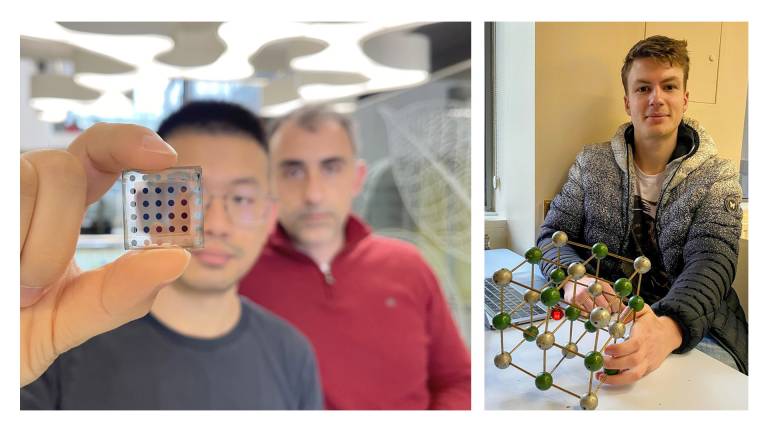 Their groups’ research focuses on understanding the underlying chemistry and physics which govern the properties of materials, and then leveraging these insights to design high-performance devices that can be produced experimentally.

In particular, the groups study emerging energy materials, such as solar cells, batteries and thermoelectric generators, with the aim of discovering low-cost high-efficiency devices to support a green economy.

The study received support from the EPSRC, the European Research Council, and the European Union’s Horizon 2020 research and innovation programme, among other bodies.

Dr Kedar Pandya, Director for Cross-Council Programmes at EPSRC (Engineering and Physical Sciences Research Council), part of UK Research and Innovation, said: “As we move towards environmentally-friendly, low carbon sources of energy the team’s findings are an important step towards increasing the efficiency of solar power technology.

“And by potentially reducing our dependency on the toxic or rare elements currently needed to produce solar cells, these findings could also deliver further environmental and cost benefits.

“It also demonstrates how the UK’s new supercomputer, ARCHER2, is helping researchers to produce results that could deliver benefits for all of society and the environment.”