UCL is partnering with higher education institutions in India to roll out the country’s first gender equality framework, improving opportunities for women in STEMM (science, technology, engineering, mathematics and medicine). 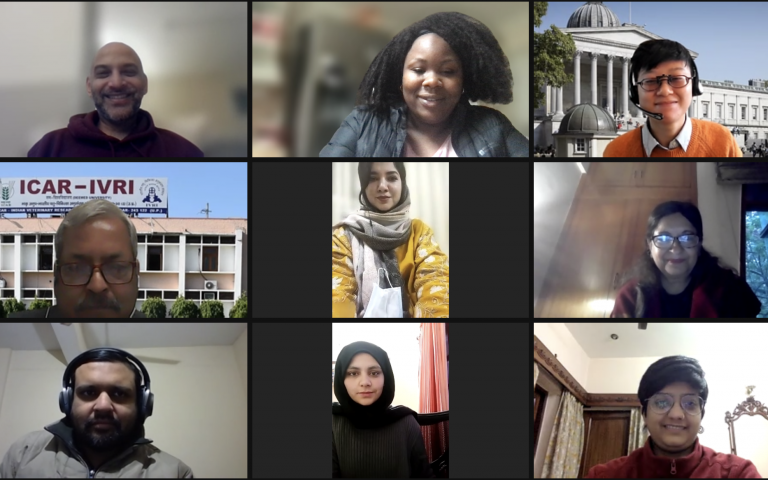 The university was one of six that successfully bid for funding to work with organisations across India as they apply for official accreditation through the country’s new Gender Advancement through Transforming Institutions (GATI) initiative.

GATI was established by the Government of India with the British Council, to counter the issue of gender disparity in STEMM subjects and promote greater sensitisation.

The programme will help Indian higher education institutions (HEIs) and research organisations better support diversity and inclusion for talent progression, as well as addressing systemic challenges women face to participate in STEMM at all levels. It seeks to improve recruitment, retention, and support women’s progression throughout their careers.

The UK partners will share best practice gained from the Athena Swan gender equality framework, of which UCL is a Silver institutional award holder.

UCL’s Envoy for Gender Equality, Professor Sara Mole (UCL Great Ormond Street Institute for Child Health), said: “We were delighted to be selected to deliver this work to improve gender equality in Indian HEIs. UCL has a deep commitment to gender equality, based on our founding principles of equal access to higher education. As a founding member of the Athena Swan Charter, we have much improved our gender equality though our long engagement with the process.

“We have much to share with, and learn from, our Indian colleagues as they begin the process of collecting and analysing their gender data and planning actions to address their priorities. We look forward to deepening our interactions with familiar and new colleagues in Indian HEIs.”

GATI mirrors the Athena Swan framework currently used across the globe, where applicants use self-assessment criteria to help identify areas for positive action as well as recognise and share good practice.

The UCL team has held several workshops with its Indian counterparts to discuss their approach and share best practice, as well as 1:1 sessions with institutions to support their work.

Professor Ravinder Kaur (Indian Institute of Technology, Delhi) said: “GATI is a timely and meaningful project, and we hope that its implementation will usher in a more gender-sensitive and gender-equal IIT Delhi. Being able to partner with other Indian institutions and UCL in the UK has enabled us to catalyse our work and draw on good practice elsewhere so that we focus on delivering the project effectively and efficiently whilst contextualising it to our own institutional and the Indian environment.”

Associate Professor Rabia Hamid (University of Kashmir) added: “GATI is a programme that has added value to 'gender perception', fostering women in STEMM for promotion and inclusion, and nurturing meritocracy irrespective of gender. It is imperative that girls and women should be contributing to science so that the society as a whole, can benefit.”

Supported by UCL Global Engagement, the initiative builds on similar activity UCL is delivering with partners in Japan and Europe.

Kevin Coutinho, Athena SWAN Manager and Gender Equity lead in UCL’s EDI team, said: “It has been amazing to work with Indian institutions on identifying and redressing the gender equality challenges and opportunities. Despite the impact of the pandemic, the willingness to engage, network and explore together has highlighted the similarities of the challenges we all face in making institutions more gender inclusive.

“Participating in the project has helped UCL colleagues appreciate the complexity of India, whether in terms of the vast size of both the country and the institutions and different approaches to problem solving. Little things stand out, such as translating a UCL staff survey into four languages so that all staff could participate and help inform the institution of its gender equality issues. This is #simplygoodpractice.”

Sarah Dickinson Hyams, Assistant Director of International Equality Charters at Advance HE, the charity overseeing both the Athena Swan and Race Equality Charters, said: “Gender disparity in STEMM in higher education is a matter of concern across the world and women in India face several challenges in moving up the academic and senior administrative ladder due to systemic and structural barriers.

“Several Indian Government policies have stressed the need for gender equality as a key requirement for inclusive development and the Government of India’s National Education Policy 2020 states that making quality higher education opportunities available to all individuals must be among the highest priorities.”

UCL received its first institutional Silver Athena Swan award in 2015 and successfully renewed it in 2021. There are also 43 awards currently held by UCL departments, the highest number of any UK higher education institution, including three at Gold level and 17 at Silver.

Celebrated every year, IDWGS campaigns for full and equal access and participation for women and girls in science.