Opinion: COVID - masks and free tests may not curb omicron spread – here’s what we should focus on

Writing in The Conversation, Professor Tim Colbourn (UCL Institute for Global Health) argues that investing in health systems more broadly is important now that the world is out of the “emergency phase” of the pandemic. 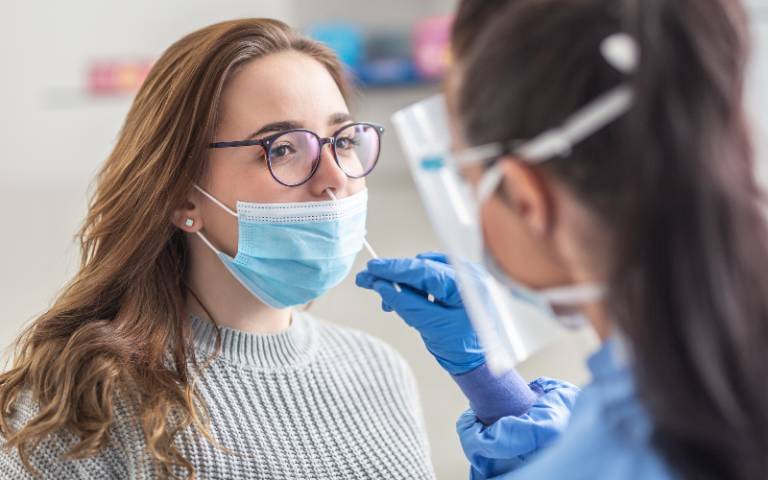 As we face continued waves of COVID-19, there have been various calls for the reintroduction of measures like mask mandates and free tests in the UK. But how much of a difference would these sorts of interventions actually make on COVID spread in the omicron era?

Let’s take a look at UK and global data to get an idea. It’s important to focus on 2022, as this data captures the period during which the rapidly spreading omicron variants have been circulating.

Data from the UK’s Office for National Statistics (ONS) shows how common COVID has been over time. These are nationally representative estimates from a large survey, and don’t depend on the availability of tests.

As you can see in the graph to the right, which charts COVID cases across the UK from not long after last July’s “freedom day”, infections have risen much higher in the omicron era compared with 2021. Omicron spreads so rapidly because it is both highly infectious and able to evade immunity from our current vaccines and prior infections.

Two years into the pandemic, we may also be past the peak of how well mask mandates and testing policies would be adhered to, should they be put in place. We know, for example, that people tended not to follow the rules as closely during the second wave of the pandemic as they did during the first.

Together these things mean we might expect COVID to now be very difficult to control.

We can see the January, April and July peaks where roughly 7%, 8% and 6% of people in England were infected respectively.

During the January wave the UK offered free tests. These ended on April 1, around the time the second wave peaked, so were available while that wave grew, but not for the July wave.

During the first wave the UK also had mask mandates covering public transport (for example, the Transport for London mandate ended on February 24), schools (until January 27), and universities (for example, UCL’s lasted until May, also covering the April wave).

Notably, the proportion of people voluntarily taking preventative measures has also declined. For example, the ONS reports that only 34% of people wore masks in the week to July 31, down from 65% in the spring.

Below is Google mobility data (movement data gathered from Google devices) for the UK in 2022.

We can see that mobility, a proxy for social mixing (and therefore COVID exposures) increases and is generally highest for the July wave. If masks or free tests were working to suppress COVID, we might expect the July wave to be significantly larger in their absence, particularly given the increase in social mixing. But it’s actually smaller than the previous two waves.

While many respiratory diseases peak in winter, the evidence isn’t conclusive on whether or to what degree COVID is affected by the seasons. So the slightly lower peak of the July wave can’t necessarily be explained by the summer weather.

The seemingly minimal impact of these measures makes sense if we consider that masks don’t protect us when we’re eating or drinking with others, and that they’re not usually worn among friends and family or in our homes. Further, there may simply be too many COVID exposures when cases are high and people are socialising at pre-pandemic levels, even for good masks to make a significant difference.

The situation is similar when we consider testing. Many people may have already transmitted omicron to others by the time they test, while other people may be disinclined to test in the first instance. This may especially apply to children and others who dislike testing, or see no end to the pandemic in sight.

Many people may also count the days after a positive test to leave isolation (as per public health guidance), rather than waiting potentially much longer for a negative test to confirm they’re unlikely to be infectious anymore.

It seems likely that COVID waves are now being driven almost entirely by waning hybrid immunity. This is immunity from vaccines and prior infections, which falls over time, precipitating the next wave. In this context masks, free tests, and other non-restrictive interventions that don’t confer immunity will probably have a limited effect.

Could the UK’s July wave have been smaller if free tests or mask mandates were in place? Possibly, but given cases are declining now despite high mixing largely without masks or tests, it might instead have been a bit flatter and longer with a similar total number of people infected until the same level of immunity was reached.

Looking at other countries it’s apparent that very few are successfully controlling omicron. For example, the once-envied low COVID countries like Japan, Taiwan, Singapore and New Zealand are all seeing significant numbers of cases despite stricter COVID control policies than the UK.

Only China appears to be controlling omicron’s spread, but in an unsustainable way with lockdowns, compulsory mass testing, and other restrictive interventions.

We are past the emergency phase of the pandemic and COVID is now far from our top health problem.

Given free tests especially are expensive and likely to have minimal benefit at the population level, I would argue that the resources that would be required to provide them should be spent on other areas of health.

Focus on NHS staffing, ambulance and primary care crises is urgently needed in the UK. Much more could be done for leading causes of death such as heart disease and dementia, as well as mental health and poor quality of life, not least considering the looming winter economic crisis.

Globally, child health would benefit from increased investment. As an example, childhood pneumonia kills more than 300 times as many children under five as COVID in a year, many for want of simple antibiotics or oxygen.

We may need to accept that there are limits on what we can do to control COVID moving forward. We can take comfort in the fact that fewer people are getting very sick and dying from COVID thanks to vaccines, and by focusing our attention on addressing bigger unsung health problems, at home and abroad.

This article was originally published in on 15 August 2022.