The reasons why Covid-19 causes severe inflammation in some people, leading to acute respiratory distress and multi-organ damage, has been revealed in a new study involving a UCL scientist. 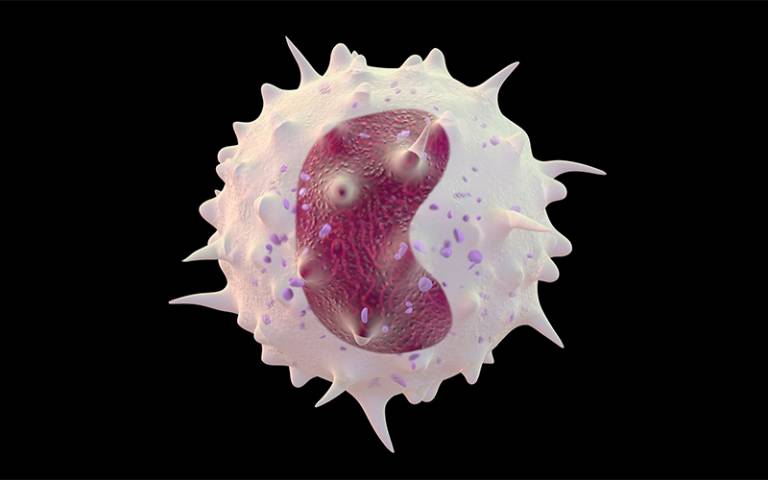 Published in Nature, the study led by researchers at Boston Children’s Hospital (US), found evidence that the virus might activate inflammasomes, large molecules that trigger a cascade of inflammatory responses that ends in cell death. Additionally, they found that certain antibodies developed during SARS-CoV-2 infection, but not following mRNA vaccination, can sometimes lead to more severe inflammation.

Co-author Dr Gautam Mehta (UCL Institute for Liver & Digestive Health) said: “During the early days of the pandemic, the emerging data suggested cell death was likely a key part of the disease process in severe Covid-19. As it happened, the ‘pyroptosis’ mode of cell death, and its role in liver disease, was already an area of interest of our group. Pyroptosis is a pro-inflammatory mode of cell death, since it releases an explosion of ‘alarm’ molecules from within the cell.

“Along with Dr Steven Bell at the University of Cambridge, we generated initial data to demonstrate that increased expression of the pyroptosis executioner ‘Gasdermin-D’ was associated with severe Covid-19.”

The UK researchers then collaborated with Professor Judy Lieberman, at Boston Children’s Hospital, whose group analysed fresh blood samples from patients with Covid-19 coming to the emergency department at Massachusetts General Hospital. They compared these with samples from healthy people and patients with other respiratory conditions. They also looked in lung autopsy tissue from people who had died from Covid-19.

They found that SARS-CoV-2 can infect monocytes — immune cells in the blood that act as “sentinels” or early responders to infection — which subsequently undergo pyroptosis leading to more severe systemic inflammation.”

Importantly, a certain group of monocytes was especially likely to be infected: those carrying a receptor called CD16. These “non-classical” monocytes make up only about 10% of all monocytes, but their numbers were increased in patients with Covid-19, Professor Lieberman’s group found. They were also more likely to be infected: about half were infected, as compared with none of the classical blood monocytes.

The CD16 receptor appears to recognise antibodies against the SARS-CoV-2 spike protein. The researchers believe these antibodies may actually facilitate infection of monocytes carrying the receptor.

Professor Lieberman, the study’s lead author, explained: “The antibodies coat the virus, and cells with the CD16 receptor then take the virus up.”

However, when the team studied healthy patients who had received mRNA vaccines against Covid-19, the antibodies they developed did not appear to facilitate infection. The reason for this is still unclear; the researchers believe that vaccine-generated antibodies have slightly different properties than antibodies that develop during infection and don’t bind as well to the CD16 receptor. As a result, the cells don’t take the virus up.

Professor Lieberman and her colleagues believe these findings may have implications for using monoclonal antibodies to treat Covid-19, helping to explain why the treatment works only when given early.

She said: “It may be that later on, antibodies may help enhance inflammation. We may need to look at the properties of the antibodies.”

Dr Mehta added: “These data have particular implications for vulnerable patients, in whom the pyroptosis pathways are already upregulated. Liver disease patients fall into this group, and we are currently undertaking a pan-European study (COBALT) to see how severe Covid-19 is in these patients, and whether they need additional protection aside from standard vaccination regimens to mitigate this risk.”