Up to one in seven (14%) children and young people who caught SARS-CoV-2 may have symptoms linked to the virus 15 weeks later, suggest preliminary findings from the world’s largest study on long Covid in children, led by UCL and Public Health England researchers. 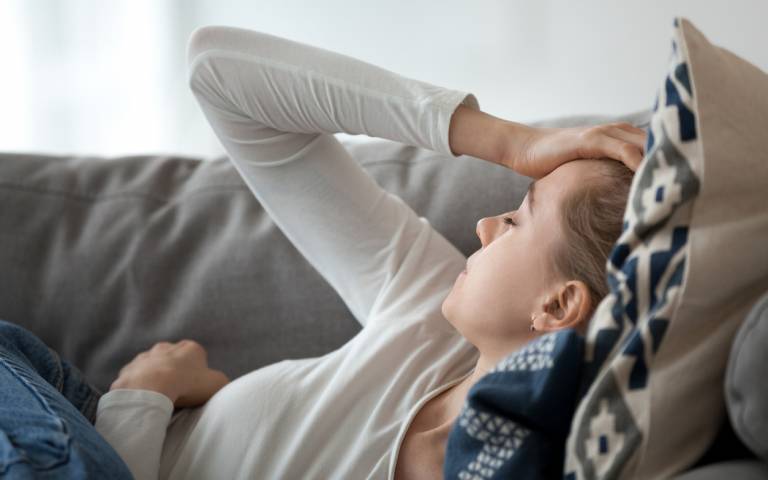 For the study, published on the preprint site Research Square and funded by the UK’s National Institute for Health Research (NIHR) and UK Research and Innovation (UKRI), researchers surveyed 3,065 11- to 17-year-olds in England who had positive results in a PCR test between January and March as well as a matched control group of 3,739 11- to 17-year-olds who tested negative over the same period.

The researchers said the data suggested that, over seven months between last September and March, at least 4,000 and possibly 32,000 teenagers of the total population of 11- to 17-year-olds who tested positive in England may have had multiple (three or more) symptoms tied to Covid-19 infection after 15 weeks.*

The lower estimate (at least 4,000) relates to a best-case scenario, in which only the teenagers who responded to the survey had any persisting problems and those who chose not to respond to the survey had completely recovered. This would mean that across England during those seven months, 4,273 11- to 17-year-olds would still have three or more physical symptoms 15 weeks post-test and 2,137 would have five or more symptoms physical symptoms 15 weeks post-test.

These figures are over and above the background symptom levels of teenagers in the control group who tested negative.

Lead author Professor Sir Terence Stephenson (UCL Great Ormond Street Institute of Child Health) said: “There is consistent evidence that some teenagers will have persisting symptoms after testing positive for SARS-CoV-2. Our study supports this evidence, with headaches and unusual tiredness the most common complaints.”

Professor Stephenson added: “The difference between the positive and negative groups is greater if we look at multiple symptoms, with those who had a positive test twice as likely to report three or more symptoms 15 weeks later”. This suggests that number of symptoms should be considered when clinicians seek to define long Covid in children.

The landmark study is the largest study to date of children and young people in the world; it relied on PCR lab proven SARS-COV-2 status; it enrolled a Covid-negative comparison control group; and it recruited nationally.

High numbers of young people who tested negative reported symptoms at 15 weeks and the researchers identified three factors that may explain this. One is that symptoms such as unusual tiredness are common in this age group generally. The second is that the timing of the survey, between March and May, coincided with the return of school following lockdown and a likely increase in infections. The third factor is that, of those young people sent a survey, only 13% responded – it is possible that these respondents were more likely to have poor health than those who did not respond.

Co-author Professor Roz Shafran (UCL Great Ormond Street Institute of Child Health) said: “Our study also shows the importance of having a comparison group so that long-lasting Covid-19 symptoms are not confused with non-Covid-related ill health. Without a control group of young people, our findings would be uninterpretable.”

Final author Dr Shamez Ladhani (Public Health England) said: “In addition to having a control group, one of the major strengths of this study is the follow-up of the children for up to two years which will give us insight into any long-lasting effects of Covid-19 in teenagers.”

The research team sent questionnaires to about 220,000 young people in England and received 17,000 responses. This study drew on the responses of nearly 7,000 of those who were tested between January and March, excluding those who were tested earlier (September to December) and therefore at greater risk of recall bias.

For later studies, the researchers will analyse survey results at six months, a year and two years from the time of the PCR test.

Health Minister, Lord Bethell said: “Most people who catch COVID-19 make a full and quick recovery, but we know some continue to suffer from symptoms for months after being infected. That’s why we are backing vital research like this to help build our understanding of long COVID so we can protect adults and children from its effects.

“To support people with long COVID we have already invested £50 million in research to ensure the right help and treatment is available and opened over 80 assessment services across England, including specialist services for children and young people backed by £100 million in additional funding.

“We want the UK to be a world leader in tackling long COVID and we will continue to support those suffering the long term effects of the virus.”

“This large study, part of NIHR’s £50 million investment into long COVID research, helps to quantify that risk and indicates that multiple ongoing symptoms may be a useful measure for long COVID.”

Dr Jonathan Pearce, Director of Covid-19 Response, UKRI’s Medical Research Council said: “This study is very important as it will inform our understanding of the long-term impacts of Covid-19 on the physical and mental health of children and young people. Comparing children who tested positive for SARS-CoV-2 with children who did not, allows researchers to identify the contribution of Covid-19 to their symptoms. The more we can learn about how people react to Covid-19 in both the short and longer term, the better equipped we will be to help affected individuals and to deal with future infectious disease risks.”

NHS deputy medical director for primary care Dr Kiren Collison said: “Within a year of long Covid emerging as a condition, the NHS in England invested £134 million to establish over 80 long Covid clinics in every local health area in the country – and in July the NHS announced 15 new paediatric hubs to help treat young people with the condition.

“Long Covid clinics are already open and helping thousands of people get support. Anyone who is concerned about long lasting symptoms of the virus that are not improving as they would expect should get in touch with their GP practice or go online to the NHS 'Your Covid Recovery' website for advice.”

*Nearly a quarter of a million (234,803) 11- to 17-year-olds tested positive for SARS-CoV-2 in the UK from last September to March. The researchers said that, if their respondents were representative of the whole population who tested positive, this would mean that across England during those seven months, 32,872 (one in seven) would have had three or more physical symptoms at 15 weeks, while 16,436 would have had five or more physical symptoms 15 weeks after the test. These figures are over and above the background level of symptoms experienced by the negative test control group.