Immune cell patterns have been discovered within tumours that can help predict if patients with kidney cancer will respond to immunotherapy, as part of a study co-led by researchers at UCL, the Francis Crick Institute and The Royal Marsden NHS Foundation Trust. 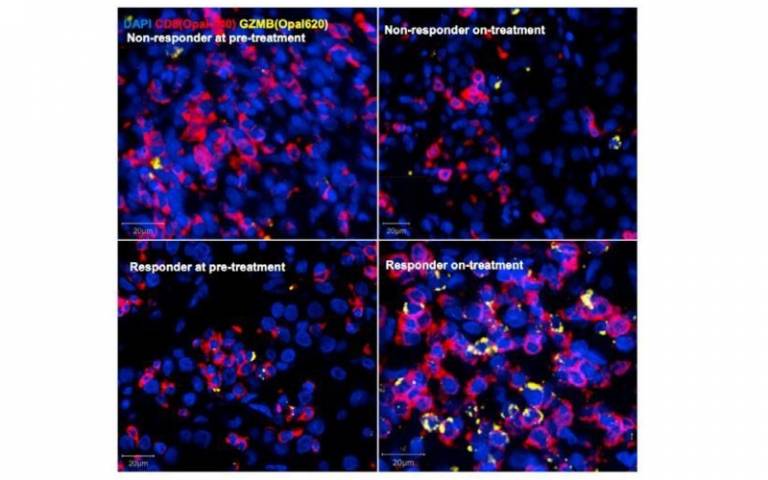 Clear cell renal cell carcinoma is the most common type of kidney cancer, accounting for around 75% of cases. Treatment often includes immunotherapy, drugs which help immune cells recognise and attack cancer cells. However, this does not always work and, for kidney cancers, there is no way to currently predict if it will be effective in an individual patient.

“Analysing multiple samples from each patient, both from different parts of the kidney tumour and from tumours that have spread to other organs, is critically important. It’s known that molecular information in kidney cancer is distributed like a mosaic within the tumour – such that taking a single sample may not capture all the information needed for a comprehensive analysis,” says Lewis Au, co-lead author, oncologist, and research fellow in the Cancer Dynamics Laboratory at the Crick.

The researchers took tumour samples at various stages of cancer treatment: before immunotherapy, nine weeks after treatment started, after surgery when the tumour was removed, and if the treatment stopped working. For three individuals, tumour samples were also collected after the patient had died. This was enabled through the PEACE post-mortem research programme which provides a unique opportunity to study tumours that have spread to other organs, which are not amenable to be sampled during life.

Within the samples collected, the team looked at different tumour characteristics and measures of immune response to see if any corresponded to immunotherapy. These included the number of different mutations present in the tumour at diagnosis and whether specific retroviral components, viral DNA present in the human genome, were expressed.

They found that the increased number of specific ‘clonal’ T cell receptors, proteins on the surface of T cells, present in the tumour before treatment, was linked to a greater chance of positive immunotherapy response. And if these T cell receptors were maintained during treatment, this was the strongest indicator that treatment would be effective.

Lewis adds: “In people who respond to this immunotherapy there is a group of T cells which appear to have already recognised the tumour, through these specific receptors. These cells, with potential tumour killing activity, are sitting on the tumour but they need the drug to kick them into action.

"When T cells bearing these receptors are effectively attacking the tumour, we can see them accumulating within the cancer. But in cases where their receptors don’t recognise the tumour, they are replaced by other T cells with different receptors as the immune system tries to find a match that recognises and kills the tumour.

“Our study also shows how in-depth studies of cancer biology within clinical trials can be incredibly powerful.”

Dr Emine Hatipoglu, co-lead author, specialist oncology registrar, and Cancer Research UK clinical research fellow at UCL Cancer Institute adds: “This study helps us understand why this immunotherapy sometimes works and sometimes doesn’t. There is a specific T cell response which increases the chance of effective treatment. With this deeper biological knowledge, it might be possible to find new cellular or combination therapies that increases the chance of survival for our patients.”

Dr Samra Turajlic, group leader of the Crick’s Cancer Dynamics Laboratory and consultant oncologist at The Royal Marsden NHS Foundation Trust, said: “Immunotherapy has transformed our ability to treat certain cancers like melanoma skin cancer, kidney cancer, and lung cancers. But there’s still a lot of research to do to help us understand the precise ways it works and why it’s effective in some patients and not others.”

Sergio Quezada, Professor of Cancer Immunology and Immunotherapy at UCL Cancer Institute, adds: “Cancer cells survive and grow because they have found a way to avoid the immune system. Understanding this process paves the way to the development new and more effective ways to stimulate T cells against cancer cells which hold the key to better treatments.”

Annie Vigneau-Singh, a kidney cancer patient at The Royal Marsden, received treatment through the ADAPTeR trial from May 2017 for four years.

Annie said: “Following my diagnosis in 2015, I’d had surgery to remove my left kidney but six months later, my scans showed that the cancer was spreading to my lungs. I was given the option to be part of a new immunotherapy trial called ADAPTeR and be treated with the drug, Nivolumab, which wouldn’t have been available as a treatment option outside of this clinical trial at the time. Immunotherapy sounded hopeful and I was very keen to try this new treatment. Within eight weeks of starting the trial, scans showed that the growth on the lung had reduced quite a lot. I also had no side effects. Everything had worked so well that it was quite incredible. It was such a positive result and a relief that I burst into tears.

“Sadly, my scans in March 2021 showed small progression in my lungs once again and, whilst I felt well, the drug was no longer working for me. After four years I was taken off the trial and immediately began a new treatment, I hope to be able to join another trial in future. Though the success of clinical research may vary, participation is exactly how advances in cancer care are made. I am so glad to have participated in the ADAPTeR trial and helped The Royal Marsden’s oncologists make new discoveries in the treatment of kidney cancer.”

The team will continue this work aiming to understand more about kidney cancer and how treatments work, for example a separate study is currently looking for biomarkers that could predict if a type of anti-VEGF drug will be effective in individuals.

The research was funded by the NIHR Biomedical Research Centre at The Royal Marsden and the ICR and Cancer Research UK.