How apples get their shapes

Using theory, numerical simulations and lab experiments, a team led by UCL and Harvard researchers have shown for the first time how apples get their distinct shape. 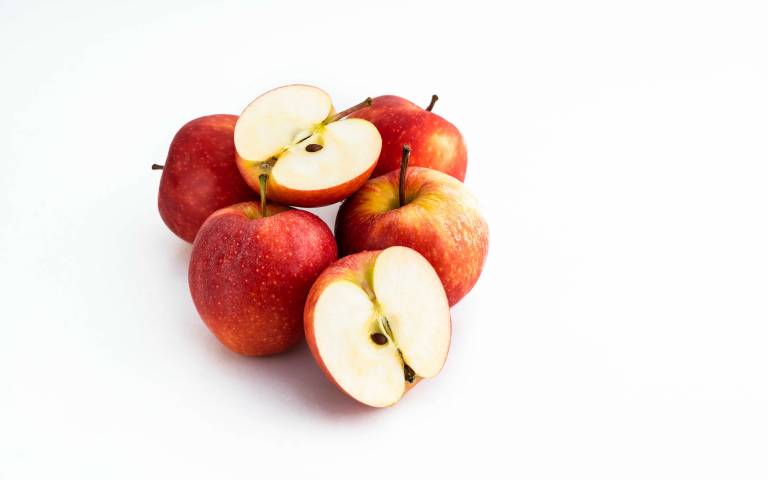 Apples are among the oldest and most recognisable fruits in the world. Humans have been drawing apples for millennia – their likeness has been captured by everyone from Caravaggio to Picasso.

The new study, published in Nature Physics, looked at the apple’s shape, in particular the dimple or cusp at the top, where the stem grows. It described the shape using singularity theory, a long-standing mathematical theory used to understand phenomena where some property is infinite, ranging from black holes to cracks in the ground to pieces of string.

The researchers demonstrated that the apple cusp – the curve going down towards the stem, and then sloping back up on the other side – was a singularity, exhibiting the same 2D shape as a droplet of water as it breaks from a column, a pattern of light in a swimming pool, or water in a bath as it drains down a plug hole.

Co-lead author Dr Thomas Michaels (UCL Physics & Astronomy) said: “What is exciting about singularities is that they are universal. The apple cusp has nothing in common with light patterns in a swimming pool, or a droplet breaking off from a column of water, yet it makes the same shape as they do.

“The concept of universality goes very deep and can be very useful because it connects singular phenomena observed in very different physical systems.”

The research team began by collecting apples at various growth stages from an orchard at Peterhouse College at University of Cambridge (the alma mater of another famous apple lover, Sir Isaac Newton). They cut the apples in half and tracked the growth of the dimple, or cusp as they called it, over time. 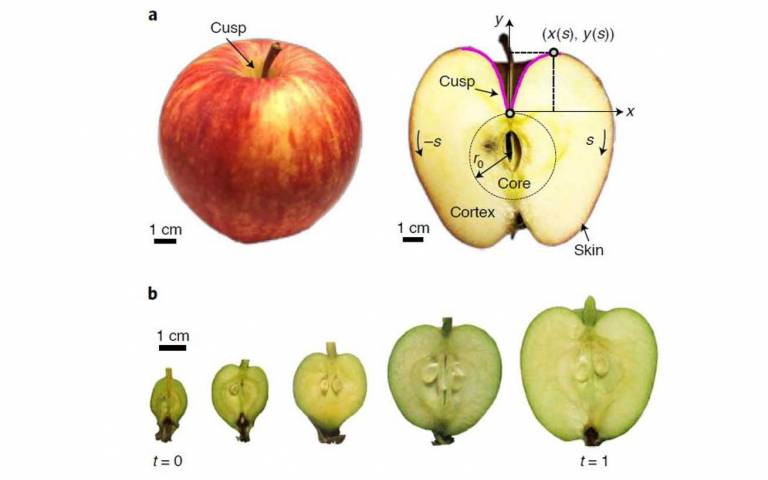 Building from this theoretical framework, the researchers used numerical simulation to understand how differential growth between the fruit cortex and the core drives formation of the cusp. They then corroborated the simulations with experiments which mimicked the growth of apples using gel that swelled over time.

The experiments showed that different rates of growth between the bulk of the apple and the stalk region resulted in the dimple-like cusp.

Senior author Professor L Mahadevan, of the Harvard John A. Paulson School of Engineering and Applied Sciences (SEAS), said: “Biological shapes are often organised by the presence of structures that serve as focal points. These focal points form singularities where deformations are localized. Every apple is characterised by a cusp, the inward dimple where the stalk meets the fruit.”

Co-author Dr Aditi Chakrabarti, of SEAS at Harvard, said: “Being able to control and replay morphogenesis of singular cusps in the laboratory with simple material toolkits was particularly exciting.

“Varying the geometry and composition of the gel showed how multiple cusps form, as seen in some apples and other drupes, such as peaches, apricots, cherries and plums.”

The team found that the underlying fruit anatomy along with mechanical instability may play joint roles in giving rise to multiple cusps in fruits.

“Morphogenesis, literally the origin of shape, is one of the grand questions in biology,” said Professor Mahadevan. “The shape of the humble apple has allowed us to probe some physical aspects of a biological singularity. Of course, we now need to understand the molecular and cellular mechanisms behind the formation of the cusp, as we move slowly towards a broader theory of biological shape.”

This research was co-authored by Sifan Yin, a visiting student from Tsinghua University and Eric Sun, a former undergraduate in the lab.