An innovative way of identifying contaminated drinking water could reduce the spread of deadly diarrhoeal diseases by enabling communities to take action more quickly to limit exposure, a new study co-led by UCL academics has found. 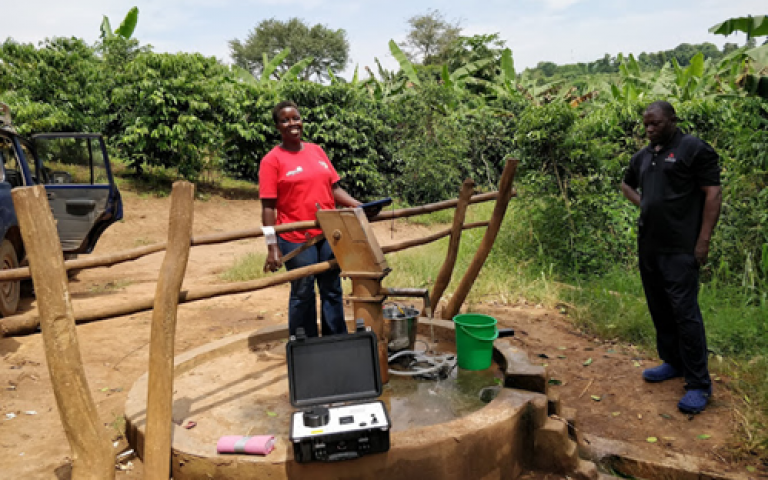 The paper, published in Water Research, shows how a technique exploiting the fluorescent properties of microbiological materials in water can instantly detect faecal contamination, and is a more reliable indicator of the risk of bacteria and viruses than previous testing methods.

Researchers from UCL Geography, the British Geological Survey and Makerere University in Uganda examined changes in water quality over a 14-month period from 40 sources supplied by groundwater in the rapidly expanding town of Lukaya in southern Uganda.

Drinking water contaminated with human and animal faeces is consumed by at least two billion people worldwide. This pollution is responsible for outbreaks of waterborne diseases that remain common, even in high-income countries.

Globally, diarrhoeal diseases attributed to faecally contaminated water supplies and unsafe sanitation account for more than 1.6 million deaths each year, with over a quarter of these in children aged under five.

Analysis of these indicators requires use of sterile equipment and culturing techniques, which limit the frequency of water sampling and mean that contamination events can be missed. Time lags of one or two days before results are returned mean that people can already have been exposed to polluted water.

Co-author, Professor Richard Taylor (UCL Geography), said: “The ability to test in-situ fluorescence as an indicator of faecal contamination risk in a wide range of environments and conditions has greatly improved both the evidence base for this method of water quality monitoring and our understanding of what fluorescence observed in water means.”

The new research builds upon field studies conducted in a network of urban observatories in Senegal, Kenya and Uganda under the UCL-led AfriWatSan project, supported by The Royal Society and DFID, as well as research in the UK, India, and Zambia funded by the UK’s Natural Environment Research Council.

Co-author, Dr Robinah Kulabako (Makerere University) added: “This robust, rapid method of monitoring the risk posed by faecal contamination has enormous implications in Uganda, not only for untreated water sources such as wells and springs as it enables communities to respond rapidly to contamination events, but also for low-cost, continuous monitoring of piped water supplies.”

Use of portable fluorimeter to test the quality of water sampled from a shallow well by co-author Jacintha Nayebare in Lukaya Town, Uganda.