This week we meet Selina Wray, Professor of Molecular Neuroscience at the UCL Queen Square Institute of Neurology. Here, she chats to us about co-leading a takeover of the Science Museum Lates with Alzheimer’s Research UK to showcase UCL Dementia Research. 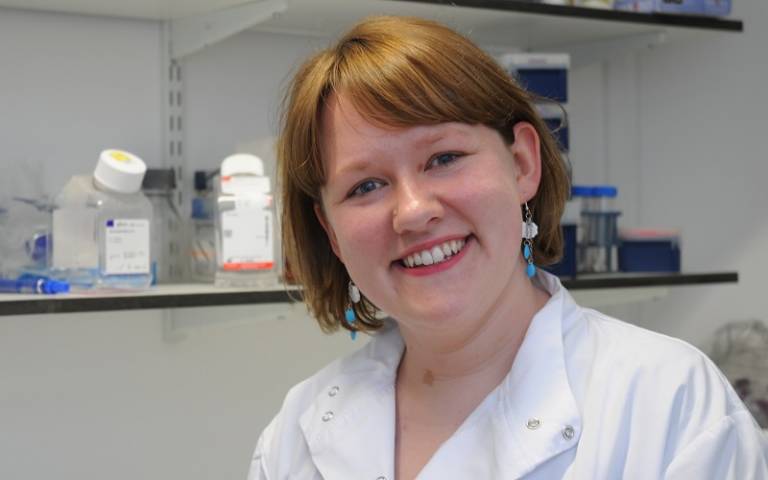 I am a Professor of Molecular Neuroscience at UCL Queen Square Institute of Neurology. I lead a group of super talented researchers who are interested in understanding the molecular mechanisms of Alzheimer’s disease (AD) and frontotemporal dementia (FTD). To do this, we generate stem cells from people with genetic causes of dementia and use these to generate neurons (the cell type that is affected in different forms of dementia) – allowing us to have personalised 'dementia in a dish' models which we can study in the lab.

By using cells directly from patients, we can investigate the very earliest signs of cellular dysfunction and develop strategies to prevent this, which could ultimately become new therapies. This is crucial, as there are currently no treatments for AD or FTD that can slow down or prevent the disease. I’m really lucky to work alongside geneticists, pathologists, clinicians as well as other cell biologists – we are really embedded in a translational environment that is determined to work for patient benefit.

I joined UCL as a junior research fellow in 2009. I was previously a PhD student at KCL, and the end of my PhD coincided with Professor John Hardy moving to UCL after working in the US for several decades. So, it was a perfect opportunity to join his group and I was a part of a team who set up patient-derived stem cell models for dementia. This went on to form the basis of my junior and senior fellowships from Alzheimer’s Research UK and became the foundations for my own lab – I’ve been really fortunate to go from post-doc to professor in my 12 years here and it’s something I don’t take for granted.

I’ve always enjoyed being involved in public engagement and in 2016 I co-led a takeover of the Science Museum Lates called Lost in Thought, together with Alzheimer’s Research UK, where we showcased UCL Dementia Research. There were around 5000 attendees and it was so exciting to engage with such a diverse crowd and see how interested they were in this important area!

I’m also really proud that we have acted as host lab for In2Science, a scheme which facilitates lab work experience for students from under-privileged backgrounds. As someone who came from a low-income background myself, I really want to hold the door open for others.

One of the challenges of our work is that stem cells are a model of development, and we are trying to use them to model disease that appear later in life. Recently, we have started to reframe our thinking about this to see it as an opportunity rather than a challenge: why are young neurons protected? So, we are trying to understand how protein quality control changes during development, and this might give us insights into protective strategies. In a similar theme, we have been trying to understand whether there are developmental alterations in neurodevelopment that don’t manifest until later in life. We’ve also been working a lot with organoids – or 3D 'minibrains' as they are sometimes referred to – which is at the forefront of cell culture technology and super exciting!

Album: If You’re Feeling Sinister by Belle & Sebastian;
Film: I recently saw Moxie, by Amy Poehler – a good film to watch in the #MeToo era;
Novel: Bonfire of the Vanities by Tom Wolfe.

David Attenborough (I’m sure everyone picks him!), Grayson and Philippa Perry (Art Club has got me through lockdown!) and Marina Hyde (likewise her columns, which never fail to make me laugh!) – I bet it would be a fun dinner conversation!

Focus on one step at a time – we too often see things as stepping-stones on the way to an ultimate goal, but it’s important to be fully immersed in the present and acknowledge/celebrate the small wins along the way! It also helps to find people who can help you focus on the big picture when things are tough – setbacks are inevitable, but it’s important to put things in context and ask, “will this matter five years from now?”

I have five tattoos, on my feet, back and thigh!

I spent 18 months as a visiting researcher in Edinburgh and totally fell in love with Scotland – I loved exploring the country and spent an Easter weekend on Lewis & Harris which is just breath-taking – the most beautiful place I have ever been to.

In London my favourite place to de-stress is Barry’s Bootcamp in Olly T’s 5.30pm class – I’m a sucker for punishment!