This week we meet Niki Kohandel, Fine Art student at the Slade. Here, she chats to us about experimenting with analogue film and her new short film, Just Another Year, which is currently being screened at the Museum of Modern Art in New York. 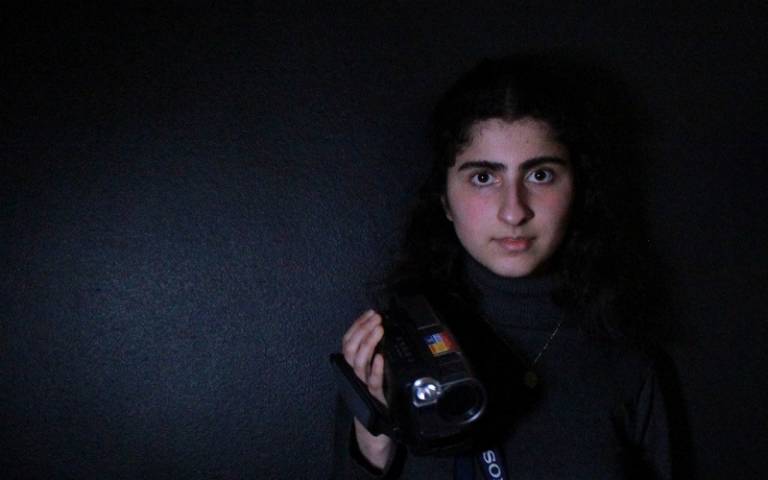 I am in my second year of undergraduate studies in Fine Art at the Slade. Being in the Fine Art Media department is very exciting, as it allows me to experiment with a wide range of materials and processes including analogue film and photography, installation, printmaking and even writing. This freedom has really been really key to the development of my practice, through which I aim to bridge the gap between documentary and fictional storytelling.

My work often stems from oral histories: I treat family anecdotes, personal accounts, tales and even cooking recipes (informed by my French-Iranian heritage) as materials, which I gather, reassemble and rewrite into socio-political narratives. In the future, I hope to continue exploring these concerns, primarily as a filmmaker, although I also have some artist’s book projects in mind, drawing from various ongoing photo collaborations with friends and relatives of mine.

Funnily enough, one of the most amazing opportunities I’ve had so far arose as a result of my returning home last year in March, to spend lockdown with my mother in France. This led me to be with her for Persian New Year and document our celebration with the same film camera she had used to record my childhood – so that the roles were now being reversed! As we aren’t surrounded by an Iranian community, we’ve adapted some of the rituals, such as jumping over fire, to living in a flat. The film looks at the small but important domestic gestures that constitute the setting of the Haft-Sin table, embracing this poetical approach to life which is performed again every Spring.

It has recently been selected by film curator Róisín Tapponi to be included in the programme of an online screening at the Museum of Modern Art in New York. I’m incredibly thrilled, for Just Another Year is available to watch as part of MoMA’s Modern Mondays film series from 8 to 22 March, alongside the outstanding work of three other filmmakers, all supported by Tapponi’s pioneering Habibi Collective, a digital archive and curatorial platform for women’s filmmaking from South-West Asia and North Africa. Just Another Year is a window into the life of a woman, my mother, who has been living away from her family for almost three decades now.

This isn’t a place, but students are entitled to a discounted MUBI subscription. MUBI is a streaming platform promoting many art house and independent films from all across the world, which is an amazing resource to have right now, as all cinemas are closed.

What’s one thing you’d like to see in a post-Covid world?

I hope the current crisis will have brought enough attention to questions of border control and their link to inequality. In a post-Covid, but also post-Brexit world, I am awaiting to see whether increasing travel restrictions will help citizens of Western countries realise the absurdity of being denied entry to specific parts of the world based on one’s country of origin.

Since the pandemic hit, I have found a lot of inspiration in the resilience of all Slade students and teaching staff. Our access to studios has been extremely limited, when not completely restricted for almost a year now, yet it has been motivating to see how everyone has managed to keep on making in spite of that. Readjusting one’s practice around the lack of resources, space and social contact demands continuous efforts and has been really hard on everyone’s mental health, and even though I do not wish for the current situation to carry on, I definitely think this has been a valuable learning experience.

I can spend hours watching videos of Italian grandmothers making fresh pasta. I am always amazed by the strength they display whilst kneading and rolling the dough, which sometimes ends up being as large as two meters!