Wikipedia page views could be used to monitor global awareness of biodiversity, proposes a research team from UCL, ZSL, and the RSPB. 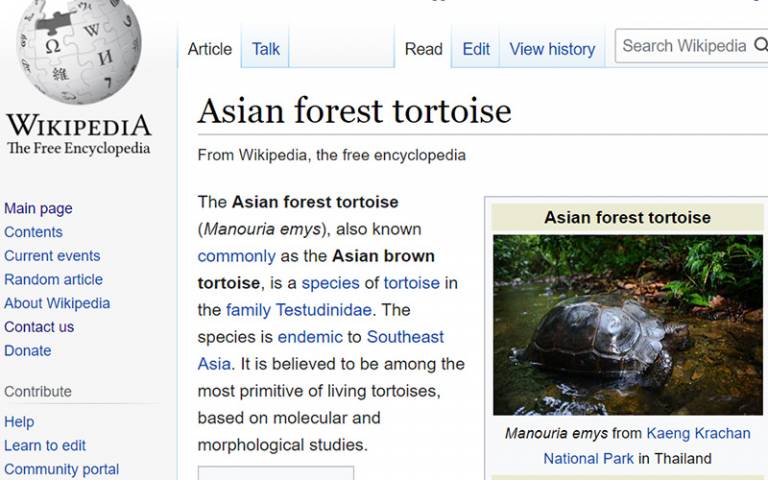 Using their new metric, the research team found that awareness of biodiversity is marginally increasing, but the rate of change varies greatly between different groups of animals, as they report in paper included in a special edition of Conversation Biology.

Lead author, PhD student Joe Millard (UCL Centre for Biodiversity & Environment Research, UCL Biosciences and Institute of Zoology, ZSL) said: “As extinctions and biodiversity losses ramp up worldwide, largely due to climate change and other human actions, it’s vital that the global community works together to protect biodiversity. But to do that effectively, we need buy-in from the public.

“To track our progress, we need to understand the extent to which people recognise the value of biodiversity, which can help to determine what might drive changes in awareness and behaviour.”

In 2010, countries across the globe agreed on the Aichi Targets set out by the UN-led Convention of Biological Diversity, one of which was public awareness of the value of biodiversity. But not all of the targets could easily be measured, which may have hampered progress on meeting the targets – none of which were fully met by 2020.

The research team sought to fill a gap in the measurement of public awareness of biodiversity’s value, drawing inspiration from the Living Planet Index (LPI), an aggregation of change in many vertebrate populations, which is managed by colleagues at the Institute of Zoology, ZSL. Previously awareness was primarily measured by surveys, which did not have an adequately global, comprehensive scope, and can be subjective.

The team developed a new metric derived from the rate of change of page views for Wikipedia entries for individual animal species. They pulled together a dataset of more than 2 billion views of the pages for 41,197 animal species, from the 10 most widely-used languages on the site, and tracked how page view patterns changed from 2015 to 2020. The researchers adjusted for background popularity of Wikipedia, to see how traffic to each page changed relative to the overall Wikipedia traffic in each language.

Their new metric, called the Species Awareness Index, showed a marginal increase in biodiversity awareness over the five-year period. Awareness increased fastest for reptiles, while it declined for amphibians. The species that have seen the fastest increase in global interest are the long-tailed tit, the critically endangered Asian forest tortoise, and the Indian flying lizard. The Kemp's ridley sea turtle, the world’s rarest sea turtle, also saw a large increase in page views.

Overall, increases in views did not appear to be related to either the trade of species or their contribution to the pollination of plants, which the authors say suggests that their metric has detected an increasing awareness of biodiversity generally, but perhaps not yet a growing awareness of its value.

Millard said: “We hope that our metric could form the basis of a new global indicator of biodiversity awareness that would be useful to policy makers, perhaps supported by other measures, and it could also be used to track the impact of specific initiatives.”

Senior author Dr Robin Freeman (Institute of Zoology, ZSL) said: "Understanding the importance of species to people is critical for estimating their cultural value – an aspect of biodiversity that is poorly measured. Our Species Awareness Index is the first attempt to track this over such a large number of species and different languages. We're really excited to see how this index changes with different conservation interventions and media campaigns."

Co-author Professor Richard Gregory (RSPB and UCL Centre for Biodiversity & Environment Research) commented: “COVID lockdown has brought our conflicted relationship with nature into stark relief. Never have we been so aware of nature around us nor of the dangers of an increasing disconnect with nature for our lives and our livelihoods. Understanding and measuring biodiversity awareness and connection is a critical priority.”

The study was funded by the Natural Environment Research Council and the Royal Society for the Protection of Birds (RSPB).