Analysis: What the first images of a black hole’s magnetic field revealed

Dr Ziri Younsi (UCL Mullard Space Science Laboratory) is one of just two UK scientists on the Event Horizon Telescope team. In 2019 the team unveiled the first direct visual evidence of a supermassive black hole and its shadow. Here he discusses the latest breathtaking images. 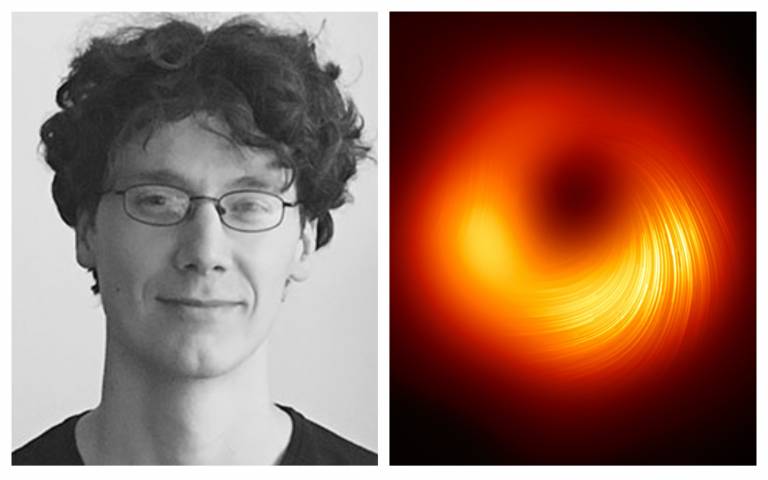 There was a lot of excitement when the Event Horizon Telescope collaboration showed the world the first ever image of a black hole back in April 2019. Weighing in at 6.5 million times the mass of our Sun, this supermassive black hole is located in the galaxy Messier 87, or M87, some 55 million light years away from Earth.

This was the first direct evidence that black holes exist. It also provided an extraordinary test of Einstein’s theory of gravity and its underlying notions of space and time – probing gravity in its most extreme limits. But we still don’t know much about these monsters.

Now, nearly two years on from this historical achievement, we have unveiled a new image of M87 using a different technique. Our research, published in two new papers in The Astrophysical Journal Letters, is providing important insights into the mysterious nature of black holes.

Due to its distance from us, imaging this behemoth of a black hole is enormously challenging. It requires a resolution sharp enough to focus on an orange on the surface of the Moon, or being able to see individual atoms in one’s own finger. The telescope manged this thanks to an unprecedented collaboration between scientists across the globe, linking together eight ground-based radio telescopes and transforming the Earth into one giant virtual radio telescope.

Black holes are perhaps the most enigmatic objects in nature, powering some of the most energetic – and unobservable – phenomena in our universe. Due to their event horizon, the boundary beyond which nothing, not even light, can escape, we cannot see a black hole directly. But matter that falls towards a black hole is drawn in by its immense gravitational pull and becomes extremely hot and luminous.

As it approaches the event horizon, this matter is super heated by friction and moves close to the speed of light, emitting copious amounts of radiation. It is radiation in the form of radio waves produced by this gas moments before it crosses the event horizon that the telescope is designed to detect.

The image of M87’s black hole provided overwhelming support for the idea that supermassive black holes lurk in the hearts of most (if not all) galaxies. They are the glue holding galaxies together and governing their dynamics and evolution. But exactly how they operate is unclear.

Our new polarised image gives compelling new evidence for how strong magnetic fields around black holes can launch and sustain concentrated jets of charged gas over thousands of light years. We now think that such highly energetic and bright jets, launching enormous amounts of matter into the intergalactic medium, are connected to black holes through these strong magnetic fields.

Astronomers have invoked different models to explain how matter behaves near the black hole to better understand this process of jet formation, but they still do not know exactly how jets larger than the galaxy itself can be launched from its central region, nor how exactly matter falls into the black hole. We now find that only theoretical models featuring strongly magnetised matter can explain what is seen at the event horizon.

Our observations provide new, detailed information about the structure of the magnetic fields just outside the black hole. Not only does this bring us a step closer to understanding how these mysterious and powerful jets are produced, it also explains how some ultra hot matter can lurk outside a black hole, resisting its gravity. Our research suggests that the magnetic fields are strong enough to push back on the hot gas and help it resist gravity’s pull. Only the gas that slips through the field can start flowing inwards to the event horizon.

As exciting as these new polarised images of M87’s black hole are, it is still only the beginning for the Event Horizon Telescope collaboration and the science of black hole imaging. We are already working on what the image of the black hole that resides in the centre of our own Galaxy would look like, which we hope to publish later this year. This is Sagittarius A*, or Sgr A*, our galaxy’s supermassive black hole.

Compared to M87, this new image is much more challenging to obtain. We are looking at the black hole through our blurry, turbulent interstellar medium – there’s a large amount of dust and gas in the way – making it significantly harder to take a clear picture. In the years to come, new telescopes will be added to the Event Horizon Telescope array, both on Earth, and eventually even in space, promising ever sharper images of black holes and providing a much more intimate understanding of these enigmatic entities.

There will be many more surprises in store. This is an exciting new era in humankind’s exploration of strong gravity and the nature of space and time, and undoubtedly the best is yet to come.

This article was originally published in the Conversation on Friday 26 March, 2021.