Current prices of carbon offsets are unsustainably low and need to increase significantly to encourage greater investment in new projects that remove carbon from the atmosphere. If prices stay low companies could be accused of greenwashing their emissions, as real emissions reduction and carbon removals are more costly than today’s prices.

Prices of carbon credits used by companies to offset their emissions are currently low, due to an excess of supply built up over several years, together with issues over whether payments for credits really result in additional reductions in carbon emissions. According to the research, titled Future Demand, Supply and Prices for Voluntary Carbon Credits – Keeping the Balance, without this surplus, prices would be around $15/tCO2e higher, compared to $3-5t/CO2e today.

The research shows, however, that the surplus will not last forever, with demand for carbon credits expected to increase five to ten-fold over the next decade as more companies adopt Net Zero climate commitments.

This growth in demand should see carbon credit prices rise to $20-50/tCO2e by 2030, as more investment is required in projects that take carbon out of the atmosphere in the long-term. These prices are needed, for example, to incentivise landowners to forgo income from agriculture and instead preserve forests and plant trees. With a further increase in demand expected by 2040 and 2050, carbon credit prices would rise in excess of $50/tCO2e.

If governments successfully reduce emissions through domestic policies, fewer carbon credits will be available to businesses through the voluntary market. This would increase carbon credit prices further, potentially reaching $100/tCO2e.

If carbon credit prices remain significantly below these forecast levels, companies could be open to criticisms of greenwashing, claiming credit for emission reductions that would have been undertaken anyway. 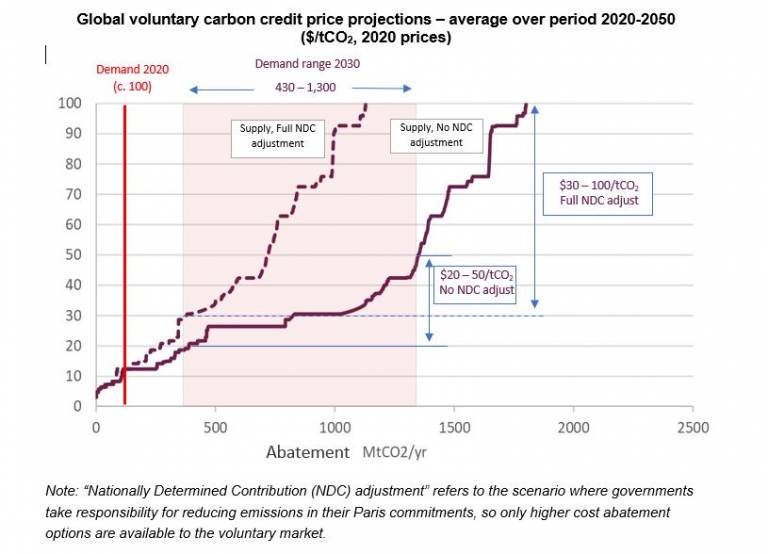 The analysis also shows that the contribution of the voluntary market to reducing world emissions needs to be seen in perspective. Even at prices of $100/tCO2e the technologies assessed in this study (reducing deforestation, forest restoration, CCS, BECCs and renewables in least developed countries) could deliver around 2bn tCO2e per year of emission reductions on average between now and 2050.

This is about 4% of world greenhouse gas emissions, and 10% of the gap between global “business as usual” emissions in 2030 and pledges in the Paris Agreement by 2030, showing that the market for offsets will be modest compared to economy-wide emissions reductions needed to reach the Paris targets and net zero by 2050.

However, over the next decade the voluntary market will provide a valuable financing mechanism to support the protection of existing forests and restoring degraded habitats, providing immediate climate and biodiversity benefits while other technologies that can remove carbon from the atmosphere are scaled up.

Guy Turner, CEO of Trove Research and lead author of the study, said: “It is encouraging to see so many companies setting Net Zero and Carbon Neutral climate targets. What this new analysis shows is that these companies need to plan for substantially higher carbon credit prices and make informed trade-offs between reducing emissions internally and buying credits from outside the company’s value chain.”

Co-author of the study Professor Mark Maslin (UCL Geography) said: “Customers, clients, investors and employees all want companies to become more sustainable and achieve net zero carbon as soon as possible.  Even with ambitious carbon reduction plans there are some company emissions that are currently unavoidable and this is where carbon offsetting is essential.  But everyone wants a carbon credit system that is reliable and really does remove carbon from the atmosphere – what this groundbreaking report shows is that this will cost significantly more than companies are paying now.”

Co-author of the study Professor Simon Lewis (UCL Geography) said: “The current market in carbon credits is the Wild West, where too often anything goes. A clean-up and independent regulation is required, which will increase the price of carbon credits. This is because in reality it is costly to remove carbon dioxide from the atmosphere. Overall it will be cheaper in the long-run to invest in moving to zero emissions rather than relying on offsets. But for those emissions that remain, the true price of removing carbon from the atmosphere must be paid, as the alternative is greenwash.”

Future Demand, Supply and Prices for Voluntary Carbon Credits – Keeping the Balance will be published and available to download from the Trove Research website.