Time for MPs to take back control of the Commons

The government’s level of control over what is debated in the House of Commons, and when, undermines parliamentary accountability and needs addressing urgently, says a report from UCL's Constitution Unit. 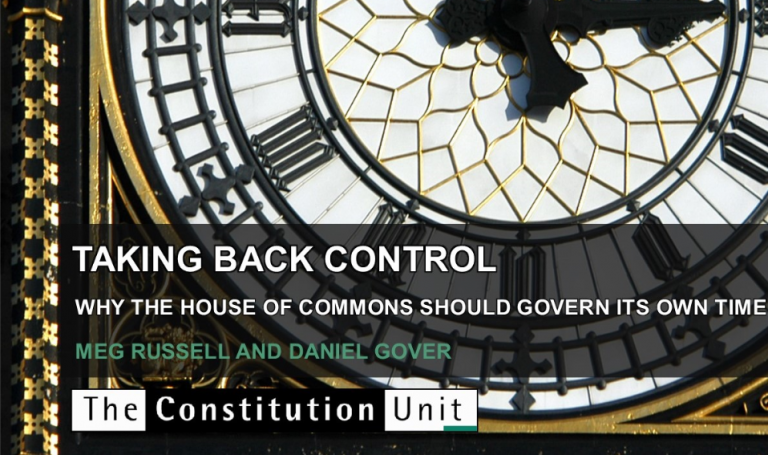 Taking back control: Why the House of Commons should govern its own time calls for a wide-ranging review of the government’s grip on Commons business to give MPs more control over their own institution.

The report illustrates how MPs have surprisingly little say over what the Commons can discuss, the timetable for debates, or even when the chamber meets.

Its authors highlight how this has caused significant controversy in recent years, from the ‘seizing of the agenda’ by MPs over Brexit to frustrations about being locked out of decision-making on COVID-19, and the way MPs needing to remain at home have been blocked by ministers from taking part virtually in some Commons proceedings during the pandemic.

The report looks at both the day-to-day Commons agenda, in particular where MPs are presented with a weekly timetable by the government on a ‘take it or leave it’ basis, and Commons sitting times – where the government has monopoly control over both recalling parliament from ‘recess’ and over prorogation, where the Queen shuts down parliament on the advice of the Prime Minister.

Some time on the Commons agenda is set aside for non-government business, such as debates led by the opposition or driven by backbenchers. But the timing of such business is still strongly controlled by government. Altogether, a range of factors make it difficult for MPs to get issues they are concerned about debated or decisions taken in the face of government opposition – even where these have the support of a majority of MPs.

Report co-author Professor Meg Russell (UCL Constitution Unit) said: “The extent of government control of the House of Commons is both unusual in international terms, and problematic for the functioning of Westminster. This is true under single party majority government, and becomes even more obvious under minority government, as applied in 2017-19.

"At present, House of Commons rules too often explicitly privilege the government rather than the parliamentary majority. But, crucially, these two are not always the same thing. The core principle guiding House of Commons functioning should be majority decision-making, not government control.”

The report picks up where key recommendations from the so-called ‘Wright Committee’ of 2009-10 (for which Professor Russell worked as a specialist adviser) left off. Some of its proposals were implemented, e.g. the election rather than appointment of select committee members and chairs, but others were not. This report argues that recent events that have sparked fierce political disputes and public debates, harming parliament and its reputation, could have been avoided if key findings from over a decade ago had been taken on board.

Co-author Dr Daniel Gover (Queen Mary University of London, and an honorary research fellow at the Constitution Unit) said: “The government’s handling of the COVID-19 crisis – both in terms of parliament’s own procedure, and the extent to which MPs have a say over policy – has raised significant concerns about government control, including among Conservative backbenchers and key select committees.

"Previous tensions over Brexit were prompted by similar concerns, including the government’s cancelling of key votes, the battles by MPs to ‘seize control’ of the Commons agenda, and parliament’s inability to prevent its own prorogation in September 2019, which the Supreme Court ultimately overturned.”

To address what it sees as an ongoing imbalance of power at the heart of UK democracy, the report makes a number of recommendations, including:

Many of the measures put forward are relatively common in other parliaments.

The report maintains that urgent action is needed. It says changes such as the fairer allocation of opposition and backbench business days in longer parliamentary sessions, and the removal of the inappropriately high degree of ministerial control over when such debates are held, could be implemented quickly and easily, while others will inevitably take more time.