This week we meet Ryan French, PhD student in the UCL Mullard Space Science Laboratory and Newkirk Fellow at the NCAR High Altitude Observatory in Colorado. Here, he chats to us about visiting the Kennedy Space Center in Florida for an exciting spacecraft launch. 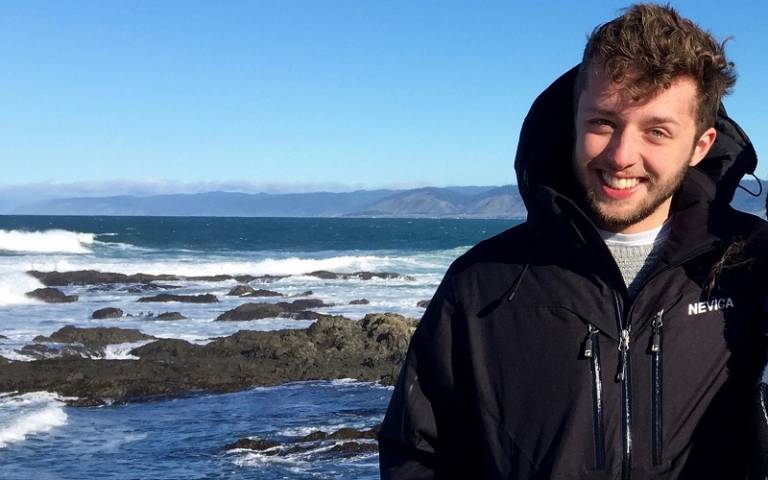 I am working towards a PhD in Solar Physics at the UCL Mullard Space Science Laboratory (MSSL). Unlike most of UCL, MSSL is not located in London, but instead down in the beautiful Surrey Hills. It’s a quirky place, situated in an old Victorian manor house and housing state-of-the-art clean rooms to build instruments for NASA, ESA and JAXA spacecraft. My own research is in the Solar Physics group, where I study the explosive energy release of solar flares using space and ground-based telescope data. Solar flares are the most explosive phenomena in the solar system, with the potential to disrupt global technology and communication systems. Understanding them is therefore important!

Our knowledge of explosive events on the Sun can also teach us about high-energy processes elsewhere in the universe, such as on other stars or even around black holes.

My interest in solar physics first arose from an undergraduate summer placement at the Met Office Space Weather Operations Centre. The Met Office are one of a few groups in the world to monitor and forecast activity on the Sun and here I developed an understanding of the Sun’s dynamic nature and ability to affect the near-Earth environment (known as ‘space weather’). From then I was hooked, curating my final-year MSci modules (also at UCL) around solar physics.

After completing my PhD, I plan to stay in solar physics research. I currently have a graduate research fellowship at the NCAR High Altitude Observatory in Boulder, Colorado, where I’m starting to build a network of collaborators across the U.S. Although things may change, my current goal is to move out there after graduating.

At the start of February 2020, I was fortunate enough to visit the Kennedy Space Center in Florida to watch the launch of the European Space Agency’s Solar Orbiter spacecraft. Two of the instruments onboard (now orbiting around the Sun miles away) were built at MSSL, and a large group of engineers and scientists from the lab were able to attend the launch in Florida! Watching Solar Orbiter launch into space is something I will never forget. I haven’t had a chance to use the spacecraft data yet, but hope to towards the end of my PhD!

Now that I work at UCL MSSL down in Surrey, I would say the Surrey Hills! Although not ‘hidden’ as such, it’s a place I’d never have visited whilst living in London for my undergrad. When living in the city, it’s easy to forget how much of the beautiful countryside is accessible by just a short train ride.

UCL has a lot of world-leading research in many different disciplines. I would introduce more cross-departmental exposure of UCL activities for students at UCL, to broaden the sense of community and encourage inter-disciplinary collaboration. I think there is a lot we can learn from one another!

Alongside my PhD research, I work a lot to communicate science with school groups and the general public. I am sure many science communicators would agree when I say that Carl Sagan is a huge inspiration. He was a flawless communicator and world-leading scientist – sparking a passion for space and astronomy in many people, including myself.

Although I spend most of my time researching and talking about space, I am also a keen hiker and wildlife/nature photographer here on the ground. Having been fortunate to spend some of my PhD time out in Colorado (before global travel shut down), experiencing the mountain hikes and wildlife there is an adventure I’ll never forget.