A team of scientists at UCL have found that blood tests measuring the hallmark Alzheimer’s protein, beta-amyloid (amyloid), could radically reduce the cost of clinical trials and potentially open the door to treating the disease earlier. 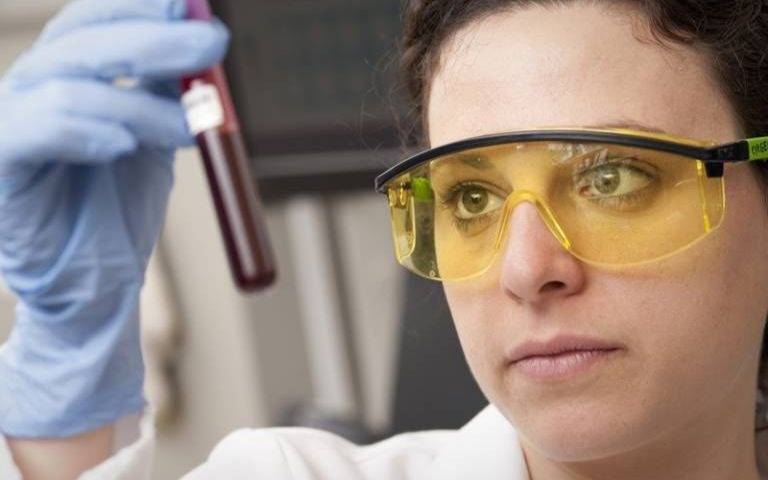 The findings, published in the journal Brain, suggest that blood tests could be used to recruit people to Alzheimer’s drug trials before they start showing any symptoms.

“Our results – from a sample of individuals from across mainland Britain who were all born in the same week in 1946 – show that blood tests may be a useful means of identifying individuals who are in the earliest stages of the disease.

“In the short term, this has implications for clinical trials of new treatments for Alzheimer’s disease. Blood tests could allow for rapid screening, and reduction of the numbers who would need more expensive PET scans before entering a study. This would considerably reduce the costs and time it takes to run clinical trials, and will hopefully accelerate the development of new treatments.”

Amyloid is a protein that builds up in the brain in Alzheimer’s, and it is thought to set off a cascade of processes that result in damage to the brain and the symptoms of the disease. Amyloid accumulates in the brain years before symptoms appear and clearing this protein has been a major focus of Alzheimer’s research for the last two decades.

Most amyloid-lowering drug trials so far involve people who already have symptoms­ – an approach that has yet to result in a new treatment. Many researchers believe that by the time symptoms set in, the window of opportunity for preventing cognitive decline may have already passed. These drugs are likely to be more effective earlier on, in people who have amyloid build-up but don’t yet have symptoms.

Scientists have developed radioactive tags that attach to amyloid protein. A PET scanner can pick up the radiation from these tags to reveal the extent of amyloid build up in a person’s brain.

Researchers use these scans to recruit people to clinical trials, confirming that their symptoms are caused by Alzheimer’s and not a different form of dementia. Unfortunately, they are very expensive and require specialist facilities that are only available in a few locations throughout the country.

To test anti-amyloid drugs in people before symptoms set in, researchers would have to carry out many times more scans to identify enough people for a clinical trial. This is too expensive to be practical.

Researchers need a way to narrow down the pool of potential participants who go on to have amyloid confirmed in a PET scan. The team at UCL looked at different blood tests as a way to achieve this.

The team worked with a unique group of over 400 volunteers, who did not have dementia, and were recruited from the Medical Research Council National Survey of Health and Development (NSHD) 1946 British Birth Cohort. They had amyloid PET scans and blood tests as part of the Alzheimer’s Research UK-funded Insight 46 study, Blood tests were done at UCL and through collaboration with researchers at the University of Gothenburg, Sweden.

The researchers compared three different ways of measuring proteins of interest in the blood and compared the results of the blood tests to those from the PET scans.

In this group of cognitively healthy individuals around the age of 70, approximately one in five (18%) had evidence of a significant build-up of brain amyloid – in a similar pattern to patients with Alzheimer’s dementia.

The best performing blood test was able to identify those individuals with high levels of amyloid with about 85% accuracy. Using blood tests to screen for amyloid would reduce the requirement for PET scans by roughly half.

Dr Ashvini Keshavan (UCL Queen Square Institute of Neurology), first author on the study, said: “In due course blood tests have the potential to revolutionise how we diagnose Alzheimer’s disease, allowing access to better diagnostic tests in the community, and particularly in settings where more expensive PET scans and lumbar puncture tests are not currently available thus making access to any new treatments and support more equitable.”

Dr Rosa Sancho, Head of Research at Alzheimer’s Research UK, commented: “While these blood tests aren’t yet available in the clinic to aid diagnose, reducing the number of people who would need to be recruited and go through an expensive scan would accelerate clinical trials with greater cost savings.

“A treatment that delayed the onset of dementia by five years would translate to nearly 500,000 fewer people living with dementia in the UK by 2050 and a saving to the economy of over £20 billion a year.

“Overcoming the barriers to clinical trials we face today will enable us to make the biggest difference in the lives of people affected by dementia in the future. With almost one million people in the UK living with dementia, yet no new treatments for the condition in almost 20 years, we don’t have a moment to waste.”