This year’s Yale-UCL university poetry competition provided a powerful platform for students of medicine and other disciplines to share their reflections on Covid-19. 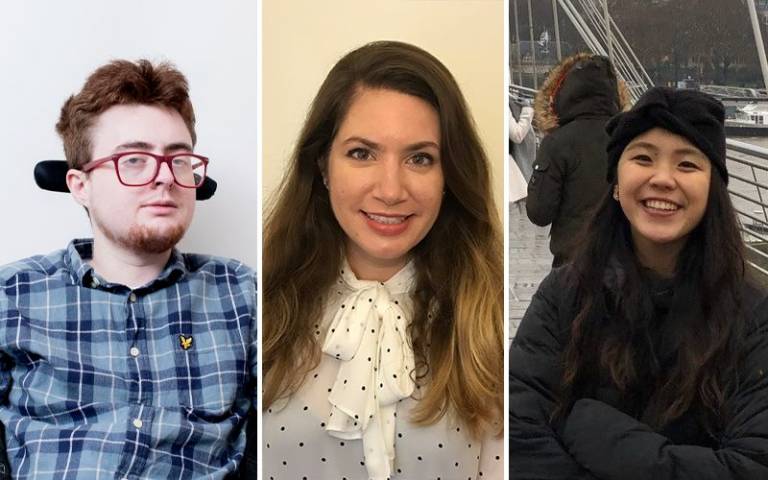 Themes of hope and resilience came through strongly, alongside death, loss and issues of race and identity.

Winning entries in the competition, now in its tenth year, were announced at a virtual event attended by students, poets, writers and guests from both sides of the Atlantic, including Nobel Prize winning biochemist and cell biologist Professor James Rothman.

For the last decade, the competition has given medical students the chance to use their creativity to explore uniquely insightful reflections on their experiences and training.

First place in the competition for students of medicine and allied disciplines was After Closing the Cadaver by Anna Vignola. Anna, 30, a Yale Physician Assistant student from Los Angeles, who has written since childhood.

The poem, which judges described as a ‘tiny masterpiece’, stemmed from a quiet moment after spending hours in a lab, a moment of savouring the joy and relief of being alive - which Anna says she has clung to during the Coronavirus pandemic.

She said: “I think science is poetry and poetry is science, especially in medicine, which is such a creative field. We bring life into the world and then see people through to death, what could be more poetic?”

Runner up in this category was Sarah Wong, 25, a final year medical student at UCL. Her poem Housecleaning, which is about different forms of loss, was praised by the judges for its simplicity and profundity.

Sarah, who moved to London to study medicine from her home in Singapore, was also named the winner in the ‘open’ category, for her poem if not now – when?, which describes her reflections on the pandemic and Black Lives Matter.

She described this poem as an attempt to connect with the global situation where inequalities and disparities are so stark. “It’s about how much we rely on each other and also about the needless deaths we inflict on each other, and ‘all that we have taken from each other’”.

Runner up in the ‘open’ category was Fibrotic, a poem created in a single column of text by disabled poet Jamie Hale, which judges commended for ‘using form beautifully’.

Jamie, 29, who is studying for an MA in Politics, Philosophy and Economics of Health at UCL, said: “As I began to use non-invasive ventilation to support my breathing at night, I was struck by the idea that, like a tree, I stored carbon dioxide at night, and wanted to consider that image. The disabled body is so often posed as unnatural that I wanted to explore it amongst deeply natural images and shapes. It was important to me that I explore these images without leaning into pity or sympathy - just difference.’

The poetry competition was born out of the Yale-UCL Collaborative, which fosters partnerships in the biomedical sciences and engineering, and has influenced the study of social sciences, humanities, law and architecture at the two universities as well as facilitating student and staff exchanges. It aims to increase the quality of creativity in the two universities; to inspire, nurture and promote the humanities within medical education and give students an outlet for creative expression.

The award celebrations were hosted by Professor Stella Bruzzi, Dean of UCL Arts and Humanities and UCL medical student Jenny He, who organised this year’s competition in between working shifts in the intensive care unit at University College Hospital.

The judging panel comprised poet, playwright and journalist Clare Pollard and poet, paediatrician and writer Dr Irène P. Mathieu. The Winners were awarded £1000 ($1370) each and runners up £500 ($685). The event is sponsored by Mintoo Bhandari and Vinni Nahata Bhandari.

Celeberating and exchanging thoughts on poetry with the winning students were judges Clare Pollard and Dr Irène P. Mathieu, UCL Professor in Cardiovascular Medicine John Martin who, as co-director of the Yale UCL Collaborative, launched the first competition in February 2011

This year’s winning poems, along with the judges’ citations, are reproduced below, with kind permission from the authors.

After Closing the Cadaver

to admire the contours

of a chest rising

as I crawl to him sinking

and guilt of being

It is hard to write a short poem well but this is a tiny masterpiece – no word is wasted, with the title itself part of this single perfect sentence. There is such shock and dissonance encapsulated in the way we move from the professional language of ‘closing the cadaver’ in the title to being, just a moment later, ‘home’, and asked to look upon a beloved living body; to enjoy this precious life. The difficulty and guilt the speaker experiences in making this shift is movingly conveyed.

Can I speak plainly of loss:

from life it brings;

the shadow it returns

birthday cards in a box

sort and that was

the kind of thing

you did for the

they were all that

moments that held in

their skin a sense

of being on their way

and that sense was all

that was not enough

to make a life

started to take up

‘Can I speak plainly of loss’? the poem begins. It is such a powerful start to this outpouring of grief told in short, self-deprecating, sobbing lines by a speaker who has – until now – kept this sorrow to themselves, as they mourn the loss of those moments ‘that held in their skin a sense of being on their way to somewhere’. In simple, ordinary language it is a poem that asks the big question of what it all means.

when you run fresh into the opening

of spring, you become witness to the

thawing of death – as the life-breath it

encases grows warm, trickles down onto

young grass, and tickles it with dew

it is not uncommon to fall in love

amidst rows of shelves stocked to the

brim with desire – but caught between

and in shame, we forget to be kind

seething, life has worn itself soft,

silent, small to take the shape of these

four walls; breathing is easier – even with

all we have stolen from it, the earth gives

us air cleaner than we’ve ever known

all we have taken from each other

(do we see it now?) decorate the spaces

more than survival demands but hey,

who can afford guilt in a crisis?

now we cannot unknow them, the faces

whose last memory of this world was

hate and their last words a plea – all the

violence we’ve but some lives caused with

our silence matter more, do we see it now?

This has the feel of a pillowbook or journal; there is something haiku-like in the attempt to capture the recurring seasons of the past year even as history pours through the verses. Like Eliot’s line ‘April is the cruellest month’ - much quoted last spring - the poet has captured the horror of new life mingling with disease in the image of death ‘thawing’ and trickling through a ‘seething’ April. I was moved by the way the poet moves through many of the universal experiences of this year – the ‘naked aisles’; the sense of life having worn ‘itself soft, silent, small’; the growing political anger, whilst always describing it with freshness, swerving the already-cliches.

Fibrosis n: the thickening and scarring of connective tissue, usually after an injury

If you graft orange buds onto a lemon

they grow together - a salad tree of

sharpness and sugar - or the bud dies.

harder than you would think - the body

knows this; the trees told me the same.

Maybe while I slept, a tree was grafted

onto me. My rootstock rots; Necrotic

buds flower from my heel. Sometimes

Nobody told it it was broken or maybe it

always knew. Both are possible - hollow

things grow strangely. And yet we grow.

Trauma changes our genetic sequence. I

am fibrosed. My muscles become

I thin. But I have roots. My legs are trees,

leech nutrients? No. Drain poison. The

puckering sharpness of crabapple before

brings a longer harvest, grafted to an

apple tree, but do not try to eat them

whole. The cold splinters my branches,

cracks appear in my skin. I swapped

doesn't travel. It doesn't need to; it knows

the forest, sends signals beneath the

been blessed with ears that hear voices

that others don't. Or do they miss voices

that others hear? The grafted tree is

neither one nor another; nor is it both.

Maybe I just dreamed I was a tree. But I

store carbon dioxide at night. Or I did.

The machine breathes for me now.

This uses form beautifully – it is a thick trunk of a poem – and brilliantly sustains its conceit, linking the thickening and scarring of bodily tissue to the process of grafting fruit trees. ‘Connecting two incompatible things is harder than you would think’ the poem tells us, but it manages to do just that with wit and grace. The speaker, like Daphne in myth, is changed into a tree through trauma, but finds that also means to ‘swap breadth for depth’, to tune into a new and different language.