Wasps provide crucial support to their extended families by babysitting at neighbouring nests, according to new research by a team of biologists from UCL and the universities of Bristol and Exeter. 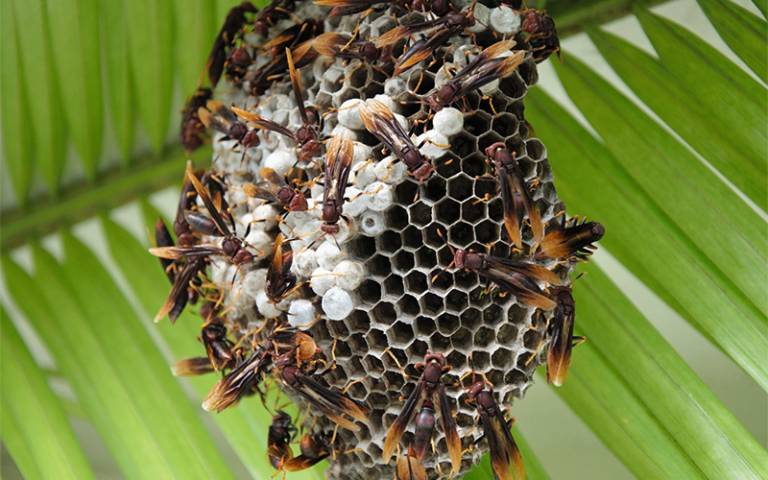 The findings, published today in Nature Ecology and Evolution, suggest that animals should often seek to help more distant relatives if their closest kin are less in need.

Lead author Dr Patrick Kennedy (University of Bristol) said: “These wasps can act like rich family members lending a hand to their second cousins. If there’s not much more you can do to help your immediate family, you can turn your attention to the extended family.”

Co-author Professor Seirian Sumner (UCL Genetics, Evolution & Environment) added: “Wasps offer amazing windows into the evolution of selflessness. There is so much going on in a wasp nest: power struggles, self-sacrifice, groups battling against the odds to survive… If we want to understand how societies evolve, we should look more deeply at wasps.”

By closely observing 20,000 baby wasps and their carers on colonies around the Panama Canal, the research team could determine the usefulness of workers on colonies of different sizes. They showed that workers become less useful as the number of colony members rises, due to a surplus of help.

Co-author Professor Andy Radford (University of Bristol) explained: “By helping more distant relatives who are more in need—those living next door with fewer carers—workers can pass on more copies of their genes overall. We believe that similar principles of diminishing returns might explain seemingly paradoxical acts of altruism in many other social animals.”

Dr Kennedy added: “The fact that these paper wasps in Central and South America help at other colonies is really bizarre when you consider that most wasps, ants and bees are extremely hostile to outsiders. To solve this puzzling behaviour, we combined mathematical modelling with our detailed field observations.”

Dr Kennedy continued: “We ended up being stung a lot. But it was worth it, because our results show that worker wasps can become redundant at home. A wasp on a colony with few larvae but lots of other workers becomes almost useless: the best thing to do is to babysit the larvae of other relatives.”

Since Darwin, biologists have been trying to understand how ‘altruism’ evolves in animals. At first glance, acts of selflessness to help other individuals do not seem to allow individuals to pass on their genes.

Professor Radford said: “In 1964, the legendary biologist W. D. Hamilton figured out the cardinal rule of animal altruism. Lavish help on your family because they share many of your genes. Copies of your genes will triumph in the population.”

But the tropical paper wasps studied by the team baffled Hamilton back in 1964. In Brazil, he was surprised to notice that Polistes wasps were leaving their close family on their home nests and flying off to help the neighbours, who are less closely related.

Previous work by Professor Sumner at UCL showed that over half the workers in a Panamanian population were helping on multiple nests. Wasps usually viciously attack outsiders, so this babysitting suggested something unusual was going on.

This fieldwork was supported by the National Geographic Society and the Smithsonian Tropical Research Institute in Panama.