A new study involving researchers from UCL has found consistent evidence of a decline in ocean currents, with the Gulf Stream System, also known as the Atlantic Meridional Overturning Circulation (AMOC), at its weakest in over 1,000 years. 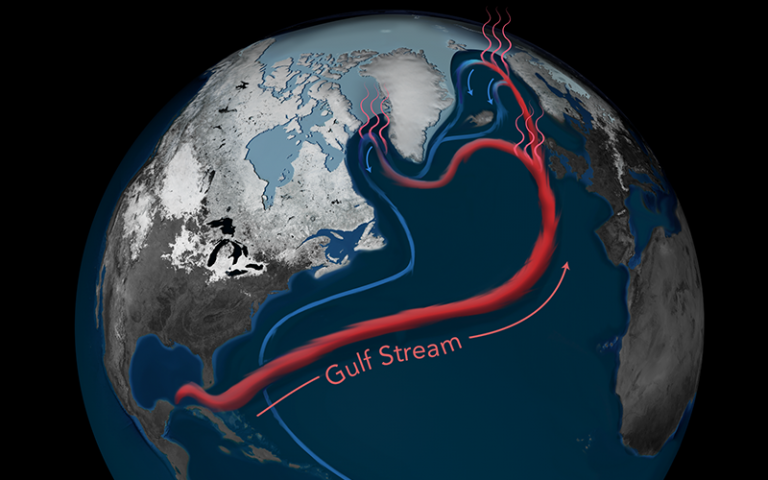 Published today in Nature Geoscience, the team found that the Gulf Stream’s slowdown in the 20th century is unprecedented and is likely linked to human-induced climate change.

A major mechanism for heat redistribution and crucial to the world’s climate, an abrupt slowdown of the AMOC could trigger disruptions around the globe - including a sudden rise in regional sea levels, changes in the position of major rainfall and arid climate zones.

The international research team made up of scientists from Ireland, Britain and Germany were able to reconstruct the flow history of the AMOC over the last 1600 years by using a range of several different and largely independent proxy indicators including data from tree rings, ice cores, ocean sediments, and corals, as well as from historical data, such as ship logs.

Analysis of the collated data indicates that whilst AMOC has been relatively stable until the 19th century, the system of ocean currents began to decline by the end of the Little Ice Age after around 1850, with a second, more drastic decline following since the mid-20th century.

The study findings build upon, and are consistent with, previous research led by study co-author Dr David Thornalley (UCL Geography). A 2018 Nature study by Dr Thornalley used the size of sediment grains in marine cores to reconstruct the strength of important deep sea currents, and alongside data used to reconstruct past surface ocean temperatures, it provided the first ocean evidence for the unprecedented nature of recent changes in the AMOC. Further work by Dr Thornalley’s team, in a 2020 Geophysical Research Letters study, went further and revealed how the extreme state of Atlantic circulation caused 20th century warming of the surface ocean in the Northeast Atlantic that was unprecedented in the last 10,000 years.

Dr Thornalley said: “Whilst climate modelling has long predicted a slowdown of the AMOC as a result of human-induced warming, this study shows the increasing evidence in support of the modern Atlantic Ocean undergoing unprecedented changes in comparison to the last millennium, and in some cases longer. Alongside other human pressures on the marine environment, the changes we are observing in ocean circulation are impacting marine ecosystems in both the surface and deep ocean. We will need to take account of these ongoing changes in our efforts to conserve and manage marine resources.

“Overall, this new study highlights that major changes are occurring, but it also draws attention to how in future work we must aim to resolve which components and pathways of the AMOC have changed, how, and for what reason – there is a lot we still need to learn.”

AMOC is a key control on both regional and global climate. Whilst a slowdown of the AMOC could imply more extreme and intense winter weather events in Europe, the consequences could be manifold for people living on both sides of the Atlantic – with the east coast of the US vulnerable to flooding.

Dr Levke Caesar, lead author (ICARUS Climate Research Centre, Maynooth University, and guest scientist at Potsdam Institute for Climate Impact Research (PIK)) said: “The northward surface flow of the AMOC leads to a deflection of water masses to the right, away from the US east coast. This is due to Earth’s rotation that diverts moving objects such as currents to the right in the northern hemisphere and to the left in the southern hemisphere. As the current slows down, this effect weakens and more water can pile up at the US east coast, leading to an enhanced sea level rise.”

Study initiator Professor Stefan Rahmstorf (PIK)) said: “If we continue to drive global warming, the Gulf Stream System will weaken further - by 34 to 45 percent by 2100 according to the latest generation of climate models. This could bring us dangerously close to the tipping point at which the flow becomes unstable.”

Caption: “New synthesis of evidence suggests the Gulf Stream System is at its weakest in over a millennium. Credit: Natalie Renier/Woods Hole Oceanographic Institution”