Forthcoming research from UCL’s Bentham Project on wills made by philosopher and UCL spiritual founder Jeremy Bentham shows his wish to leave his remains to benefit medical science was refined over decades, and not the last whim of an eccentric Englishman. 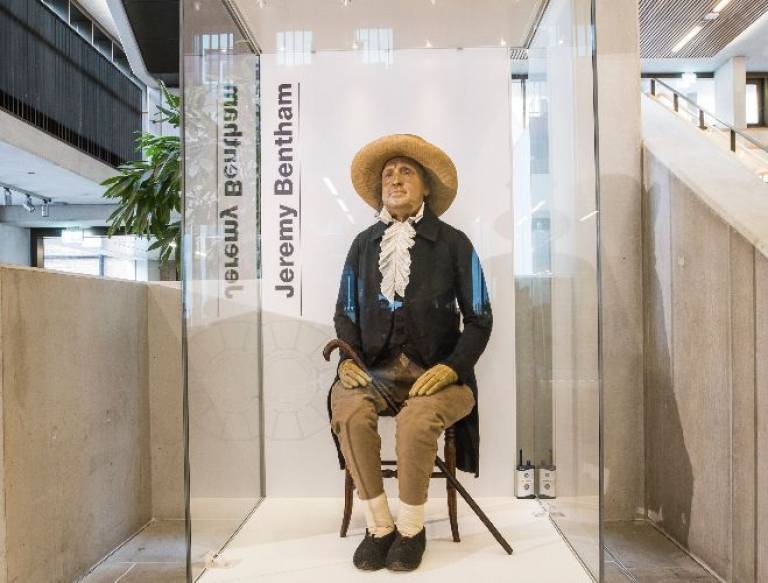 Bentham’s ‘auto-icon’ (from the Greek for self-image or likeness) sits in a showcase in the award-winning Student Centre at UCL, dressed in his clothes and holding his favourite walking stick known as ‘Dapple’. It's long been UCL’s most popular museum exhibit, attracting visitors from all over the world.

A sneak preview of ongoing work by Dr Tim Causer (Bentham Project, UCL Laws) on Bentham’s wills, as well as his unpublished pamphlet on the benefit of auto-icons, reveals insights into the mind of a man who would have had a lot to say about contemporary issues too, including memorialisation and the debate over who should and should not be honoured with a statue.

Dr Causer’s research comes in the week of what would have been Jeremy Bentham’s 273rd birthday (15 February). He is editing Bentham’s wills and ‘Farther Uses of the Dead to the Living’ for The Collected Works of Jeremy Bentham, tentatively planned for publication next year, which will make them available in one volume with detailed historical and contextual annotation. 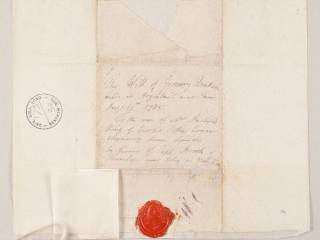 Dr Causer said: “It’s clear that Bentham had, from at least the age of 21, thought about how he might benefit humankind after his death by donating his body to science for dissection. We can a trace a line of thought from his first will of 1769, to his last will and testament made a few days before his death on 6 June 1832.

“Bentham first mentioned in writing what was to become the auto-icon in an 1824 codicil to his last will, and so the auto-icon really wasn’t the last strange whim of an old man, but something he had thought seriously about for some time. It was a physical manifestation of his radical philosophy, generosity of spirit, as well as being an act of great courage."

In an unpublished work entitled Auto-Icon; or, Farther Uses of the Dead to the  Living, Bentham talks in detail about the benefits of auto-iconism, including how they might be used for memorialisation, and was acutely aware of how a person’s achievements might be celebrated or condemned over time. In a passage anticipating current debates, he describes how auto-icons of some individuals might initially be placed in a ‘temple of honour’, while some may be put in a ‘temple of dishonour’.

But Bentham was aware that affording public honour to individuals should not necessarily be forever, describing how “Public opinion changes … some Auto-Icons, whom the interests and prejudices of our age had transferred to the temple of honour, might, when those interests and prejudices had passed away, be placed prominently in the temple of dishonour … The objects of the admiration of one generation might become objects of detestation to another’.

The new volume will be published alongside Bentham’s attempt in 1826 to interest the Home Secretary Robert Peel in his ‘Body Providing Bill’, draft legislation to provide corpses to surgeons for dissection, as well as the text of a Lecture delivered over the remains of Jeremy Bentham, given at the Webb Street School of Anatomy on 9 June 1832 by Bentham’s friend and follower Thomas Southwood Smith. Smith was responsible for creating Bentham’s auto-icon, which remained with him until 1850 when it was brought to UCL.

The research also highlights a range of fascinating snippets and insignts into Bentham’s life:

There are some intriguing insights into Bentham’s private life too. For instance, the will of 1785 reveals that he travelled to Russia in the company of a Scottish explorer called Logan Henderson, and Henderson’s two nieces; Bentham subsequently discovered that one of the women was in fact Henderson’s mistress, and she and Bentham hated one another.

Meanwhile, his last will and testament of 1832 is revealing about the elderly Bentham’s domestic arrangements. He left money to his servants William Stockwell, Mary Watson, and Ann Lay, as well as to his long-serving gardener John Elrick. The list of individuals to whom he bequeathed twenty-six gold mourning rings—including his dentist, Thomas Cartwright, the Marquis de Lafayette, Sarah Austin, and the Guatemalan politician José del Valle—is revealing about Bentham’s friendships and international influence.