The NASA-led James Webb Space Telescope, which includes hardware designed and built at UCL and which will image the very first stars to shine in the Universe, is scheduled to be launched into space later this month. The telescope, one of the great space observatories following Hubble, will be launched on-board the Ariane rocket from Europe’s spaceport in French Guiana on or after Friday 24 December. It will take 30 days for the telescope to reach the Lagrange point 2, about a million miles from Earth, where it will begin operating. UCL astronomers will be among the first to analyse its observations of the Universe.

The mission – a partnership between NASA, the European Space Agency (ESA) and the Canadian Space Agency (CSA) – is expected to make breakthrough discoveries in all fields of astronomy by investigating the light of the Universe at (invisible) infrared wavelengths.

A team at the UCL Mullard Space Science Laboratory designed and built a key piece of hardware for one of the telescope’s four instruments, a near-infrared spectrometer called the NIRSpec. About the size of a double bed, the NIRSpec measures light split into different wavelengths.

The UCL-built component, called the Calibration Source, consists of 11 mini-telescopes projecting light into a sphere, the output of which produces an even illumination of the NIRSpec detectors.

Professor Mark Cropper (UCL Mullard Space Science Laboratory) said: “The launch of James Webb is a landmark moment for science. UCL’s contribution took place over 14 years, between 1997 and 2010. Our unit, the Calibration Source, aims to ensure astronomers can measure the faintest signals from the early Universe as precisely as possible. It does this by flooding the NIRSpec optics and detectors with uniform light, revealing the varying sensitivities of different parts of the detectors to different wavelengths. In doing so, it will help astronomers determine the age and motions of the oldest stars we can see and the properties of the oldest galaxies.”

Chris Brockley-Blatt (UCL Mullard Space Science Laboratory), who managed the project at UCL, said: “I am delighted that a component built at our laboratory will be playing a role in one of the major scientific endeavours of the 21st century.” 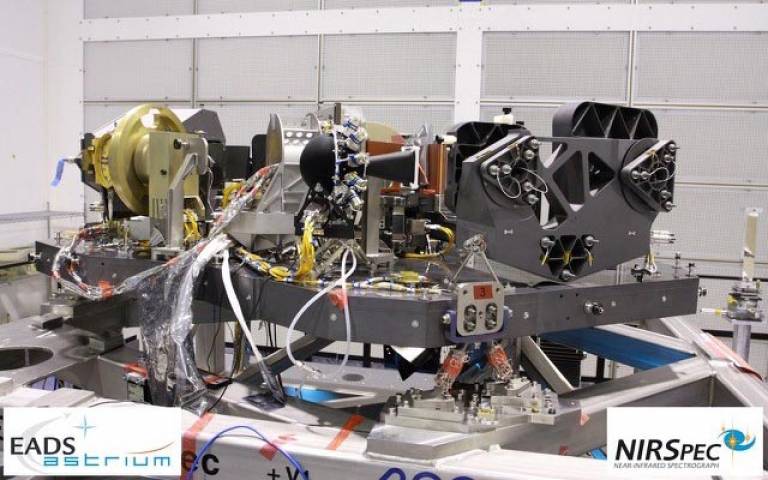 The final work to design and build the component took place between 2005 and 2010. UCL scientists and engineers, supported by researchers at Durham University, also built a larger replica of the unit together with other equipment so that NIRSpec could be rigorously tested on Earth at minus 30 degrees.

Meanwhile, two UCL astronomers, Professor Richard Ellis and Dr Aayush Saxena, will be analysing the first cycles of observations from James Webb to probe the evolution of the first stars, galaxies and black holes.

Professor Ellis (UCL Physics & Astronomy), who was the only Europe-based member of the 1995 “HST and beyond” strategic committee that proposed what would later be known as the James Webb Space Telescope, said: “This is a hugely exciting development! After 25 years of hard work by hundreds of scientists and engineers, we are about to witness a revolution in observational astronomy comparable to that achieved by the famous Hubble Space Telescope. One of the key goals of James Webb is to witness and characterise ‘cosmic dawn’ - the time when galaxies and stars first emerged from darkness. We believe this important event occurred between 250 and 350 million years after the Big Bang, when the universe was only 2% of its present age and that James Webb is capable of directly observing it.”

Another UCL astrophysicist, Professor Michael Barlow (UCL Physics & Astronomy) is a member of the European Science Team for James Webb’s mid-infrared imager (MIRI), which involves advising the instrument team and planning how to use 450 hours of MIRI’s observation time. He is co-leading a programme of observations of the remnant of Supernova 1987A, one of the brightest exploding stars astronomers have ever seen.