Abiraterone could halve risk of prostate cancer death for some patients

Adding abiraterone to the standard treatment for locally advanced prostate cancer, where the cancer has a high chance of spreading, could halve the risk of death from the disease, according to the results of a UCL-led trial. 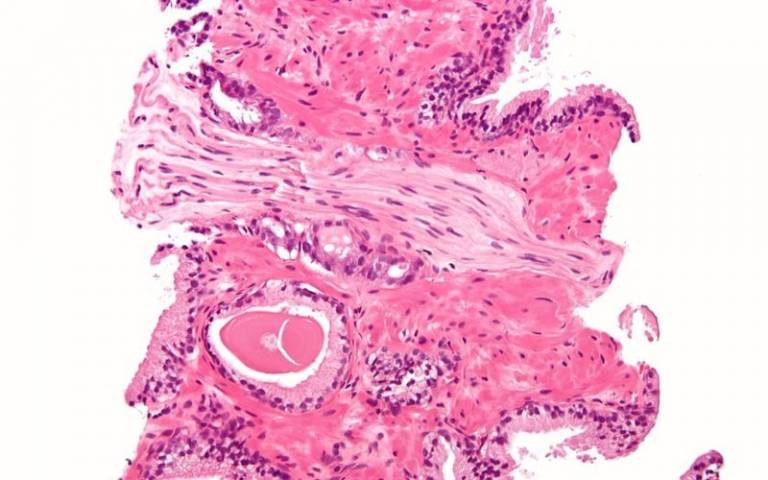 The researchers suggest that hormone therapy using abiraterone with prednisolone, could significantly reduce prostate cancer deaths and improve outcomes for thousands of people every year.

Using abiraterone for this group of people is now being considered for use in NHS England based on this research. If successful, it could be rolled out to patients immediately.

The study, published in the Lancet, is part of the STAMPEDE trial and was led by a team at the UCL Cancer Institute with collaborators at The Institute of Cancer Research, London and funded by Cancer Research UK and the MRC. The study followed patients over a six-year period.

More than 52,000 people are diagnosed with prostate cancer every year in the UK, and around 22,000 patients are considered at “high-risk” of their cancer spreading.

Abiraterone is currently being used for patients with advanced prostate cancer which has spread to other parts of the body. It’s also given to men who have stopped responding to standard hormone treatment. The drug is given in combination with a steroid called prednisolone.

However, there have remained questions over its benefits and impact on survival in earlier-stage disease.

After six years of monitoring, adding abiraterone alone, or with enzalutamide to standard prostate cancer treatment improved survival and decreased the chance of the cancer spreading. Seven per cent of people receiving abiraterone died from prostate cancer during the 6-year follow up period, compared with 15 per cent of those receiving standard care.

Around half of the people in the abiraterone group (527/986 men) also received enzalutamide, another type of hormone drug. However, using this combination of drugs did not further improve outcomes beyond those receiving abiraterone on its own, and caused an increase in side effects.

These results indicate that using abiraterone to treat earlier stage prostate cancer could extend lives and prevent the cancer from spreading.

Study co-leader Professor Gert Attard (UCL Cancer Institute) said: "This is the first time we’ve seen a treatment for this kind of prostate cancer that can do more than extend life. We’re seeing clear and convincing evidence that some people who would have died of prostate cancer, the third leading cause of cancer death in the UK, will no longer die from it.”

The STAMPEDE trial is based at the MRC Clinical Trials Unit at UCL and led in collaboration with researchers at UCL Cancer Institute and The Institute of Cancer Research, London.

Study co-leader Professor Nick James, Professor of Prostate and Bladder Cancer Research at The Institute of Cancer Research, London, and chief investigator of the STAMPEDE trial, said: “STAMPEDE continues to deliver practice-changing results. Currently, abiraterone is only given to patients with very advanced prostate cancer. Our latest findings are the first to show the drug can also benefit men whose cancer is at an earlier stage - improving survival and reducing the chance of progression. The next step is for NICE to consider and implement our findings, so that men can benefit from abiraterone before their cancer has spread, drastically improving their quality of life and preventing many unnecessary deaths.”

Michelle Mitchell, Chief Executive of Cancer Research UK, said: “These results are the latest in a long line of practice changing findings from our STAMPEDE trial. It’s recruited over 10,000 patients and has led to 29 changes in clinical practice across the world, directly influencing the treatment of people with prostate cancer. It’s great to see that yet more people with prostate cancer could soon see benefit from this innovative research.”

Ken was diagnosed with prostate cancer in 2015 and was offered the chance to be part of a separate part of the STAMPEDE trial, looking at a hormone treatment for prostate cancer called Zoladex. He said:

“My treatment would not have happened but for someone before me taking part in a clinical trial, so I just wanted to give something back. Knowing that people with prostate cancer might have better odds in the future in part because of what they learnt from my trial feels like I’ve paid it forward.”

Five years down the line, Ken is enjoying life. He continues to be monitored and has been able to have phone consultations every three to six months throughout the COVID-19 pandemic.