The light from a smartphone screen can be used to print medications, in a new 3D printing technique developed by UCL researchers. 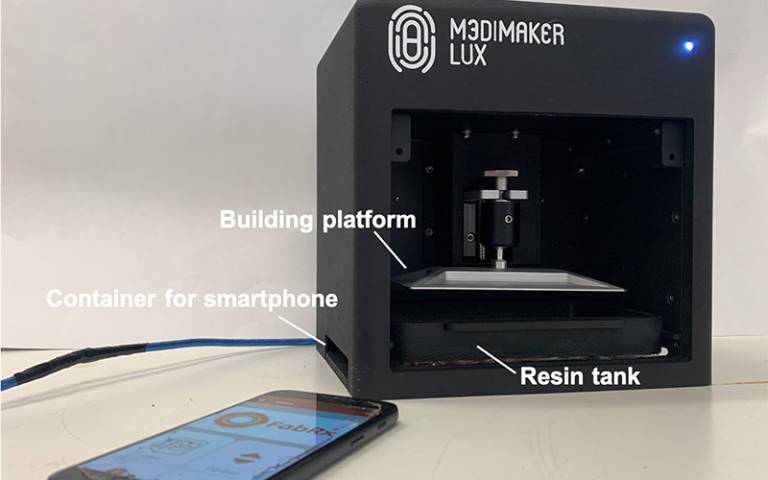 The method could make it easier for personalised medicines to be prepared in clinics, remote areas or even in patients’ homes. The report in the International Journal of Pharmaceutics is the first published study of smartphone-based 3D printing of pharmaceuticals.

Lead author, PhD researcher Xiaoyan Xu (UCL School of Pharmacy) said: “This novel system would help people who need precise dosages that differ from how a medication is typically sold, as well as people whose required dosage may change regularly. The tablet’s shape and size are also customisable, which enables flexibility in the rate at which the medication gets released into the bloodstream. It may even be possible to custom-print polypills containing multiple drugs, to reduce pill burdens for elderly patients.”

Study co-author, research fellow Dr Atheer Awad (UCL School of Pharmacy) added: “3D-printed medications could be an important part of the move towards more personalised medicines, as we hope that eventually, people will be able to print their own medications at home.”

The researchers used a new smartphone-based printer, a version of the M3DIMAKER printer they developed in collaboration with a UCL spin-out company, FabRx, co-founded by three members of the UCL research team.

If further trials are successful and the medical technology gets regulatory approval, a patient could have their own medical 3D printer at home, the size of a coffee machine.

A patient would be sent a personalised resin formulation forming the basis of the Printlet™ (3D-printed tablet), constituting the required drug dissolved in a solution of a photoreactive chemical. Their doctor would prescribe a set dose of the medicine. The patient then pours the drug solution into their printer’s resin tank. They then use a mobile app to customise the shape of the Printlet. The patient inserts their smartphone into the printer, where the light from the screen reacts with the drug solution to solidify into a Printlet of the appropriate size and shape with a set quantity of the drug.

For their latest proof-of-concept study, the researchers tested the system using two common smartphones, with the printer calibrated to suit the phone’s screen set at its highest brightness level. They successfully prepared Printlets containing warfarin, a common blood thinner, in different dosages, sizes, and shapes (such as caplets or diamonds, or lattices that enable faster release of the drug).

They tested how well the drug could be absorbed into the bloodstream by dissolving a warfarin Printlet into a laboratory model that mimics the conditions of the digestive tract. They found that the warfarin was gradually released over a 24-hour period. The rate that warfarin was released varied depending on the shape and size of the Printlet, showing that the tablets can be customised depending on how quickly a given medication should be absorbed into the bloodstream.

The researchers caution that their method still needs to undergo safety checks, such as testing the safety of the resin they use, before the Printlets could be tested in human trials. They say that a regulatory framework for 3D-printed medication will be needed very soon, and highlight that the UK’s Medicines and Healthcare products Regulatory Agency (MHRA) is currently reviewing whether a new such framework should enable patients to manufacture their medicines at home thanks to new technologies like this.

Co-senior author Dr Alvaro Goyanes (UCL School of Pharmacy and Health Research Institute of Universidade de Santiago de Compostela) and co-founder of FabRx, said: “The use of such innovative technologies and ground-breaking approaches in healthcare and pharmacy will open the door to new opportunities and treatments that are difficult to foresee right now.”

Co-senior author Professor Abdul Basit (UCL School of Pharmacy) and co-founder of FabRx, commented: “We are continuing to refine our technology and improve the safety of the Printlets, as well as to build in safeguards such as enabling doctors to remotely monitor a patient’s medical printer to check adherence to a treatment plan. While plenty of challenges remain to bring our vision to life, we hope that 3D-printed medications could facilitate point-of-care medicine, with printers in hospital emergency wards or in GP surgeries, perhaps even in resource-limited areas, and hopefully in people’s homes as well.”