11 students from the UCL Academy in Camden, London, have achieved the results needed for their move to UCL. The students will go on to study subjects including Architecture, Archaeology, Maths and Law. 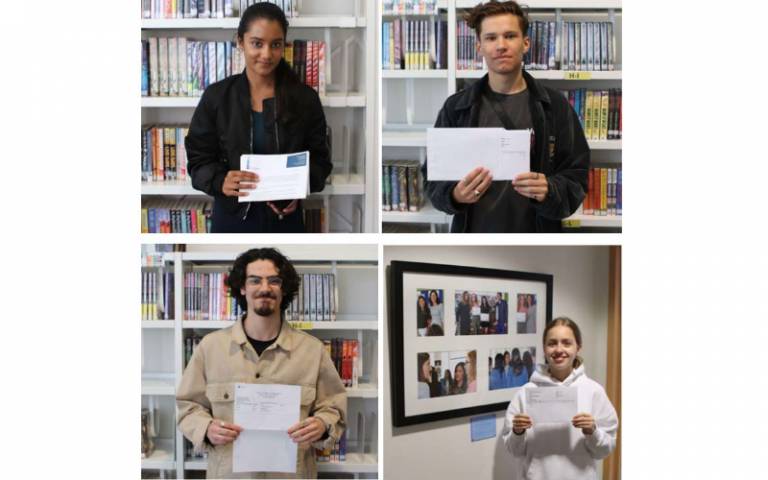 The UCL Academy was established in 2012 by UCL and was the first school to have a university as sole sponsor. It provides an education for students of all backgrounds and abilities and has developed a curriculum in partnership with UCL that enables students to aspire to academic excellence.

Over the years, many Academy students have gained places at Russell Group universities, and teachers, staff and students are delighted to announce that more students than ever before have secured places at UCL.

Professor Lucie Green (UCL Faculty of Maths & Physical Sciences and Chair of Governors, the UCL Academy) said: “We are so proud of what our students and teachers have achieved. The relationship with UCL forms the cornerstone of what makes the Academy such a unique and rewarding place to study.

“UCL’s ambition to make a lasting contribution to education in Camden has afforded diverse opportunities to students and continues to inspire all those at the Academy. Alongside the wider ethos we instil from Year 7 onwards, this partnership has proven instrumental to so many of our student success stories.”

Robin Street and Simon McBride Co-Principals of the Academy said: “UCL’s Sponsorship of the Academy has helped to establish a school community we could not be more proud of. The inspiration and opportunities that UCL provides our staff and students is endless. To see a record number of our A-level students this year achieve the grades they require to obtain places at one of the world’s leading universities is very special.

“From day one, when new students visit the campus for the day, the relationship for our school community is established. To see our A-level students fulfil their dreams and make plans for their move to the Bloomsbury campus and beyond, just adds to what has been a wonderful day all round.”

Some of the students going on to study at UCL:

Vladut Iacob, the Academy’s very own Head Boy achieved an amazing set of results; A*s in Mathematics and Physics and an A in Art. He is now looking forward to taking up his place at UCL to study Architecture. Vladut said being Head Boy taught him the skills he needed to balance his academic and personal life, as well as allowing him to represent and help other students along the way. Most importantly, he said “the last 2 years were the most meaningful of my life so far”.

Ryan Mc Evoy - With 3 A*s in Maths, Further Maths and Music Technology, Ryan is one of our many students continuing their studies at UCL, in his case, Mathematics. Ryan thanked all departments he studied under, saying “the dynamic between teachers and students was amazing” and allowed him to achieve the best possible results.

Tasnima Rahim - With 2 A*s in History and Biology and an A in Chemistry, Tasnima has secured her place to study Archaeology at UCL. She spoke emphatically about the quality of education at the Academy, specifically the mentoring system and the teaching staff in the Biology department.

Heidi Malaj- One of our Critchley Scholars excelled in her 3 chosen subjects, achieving A*s in English and Geography and an A in History. Heidi is another one of our high achieving students whose journey began at the Academy in Year 7. She is also one of the many students going on to study at UCL (Law). Heidi attributes her success to hard work on her part, but strongly believes the diversity of the curriculum at the Academy is what allowed her to extend her learning and attain her ultimate goals.

Other students going on to study at UCL are:

Elion Tmava - Deputy Head Boy. After achieving 3 A*s in Biology Chemistry and Maths, he will study for a degree in Medicine.

Sophia Gesey - After achieving an A in Psychology and a B in both Biology and Chemistry, she will go onto study degree in Pharmacy

Sarah Nedjari - After achieving an A in both Chemistry and Physics and a B in Maths, she will study for a degree in Chemistry.

Adnan Abdulkadir - After achieving an A* in Maths, A in Chemistry and a B in Biology, he will study for a degree in Neuroscience

Najma Abdulkadir - After achieving an A in Maths and Chemistry and a B in Physics, she will study for a degree in Civil Engineering

Katerina Manthjo - After achieving 3 A* in Sociology, English Literature and Economics, she will study for a degree in Law