People with mentally stimulating jobs have a lower risk of dementia in old age than those with non-stimulating jobs, finds a new international study led by UCL researchers. 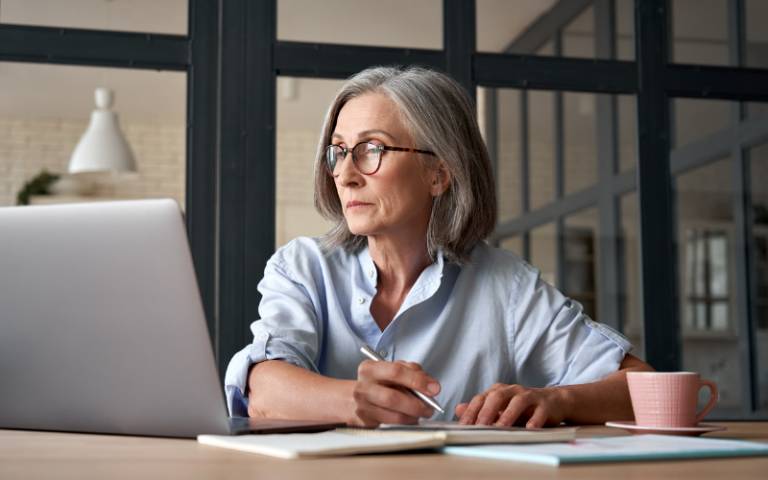 The large multi-cohort study, published in the BMJ, suggests one possible explanation is that cognitive (mental) stimulation is linked to lower levels of certain proteins that may prevent brain cells forming new connections (processes called axonogenesis and synaptogenesis).

Explaining the research, Lead author Professor Mika Kivimaki (UCL Epidemiology & Health) said: “Cognitive stimulation is assumed to prevent or postpone the onset of dementia, but trial results have varied and most recent long-term studies have suggested that leisure time cognitive activity does not reduce risk of dementia.

So an international team of researchers set out to examine the association between cognitively stimulating work and subsequent risk of dementia and to identify protein pathways for this association.

Cognitive stimulation at work was measured at the start of the study and participants were tracked for an average of 17 years to see if they developed dementia.

After adjusting for potentially influential factors, including age, sex, educational attainment, and lifestyle, risk of dementia was found to be lower for participants with high compared with low cognitive stimulation at work (incidence 4.8 per 10,000 person years in the high stimulation group and 7.3 in the low stimulation group).

This finding remained after further adjustments for a range of established dementia risk factors in childhood and adulthood, cardiometabolic diseases (diabetes, coronary heart disease and stroke), and the competing risk of death.

The association did not differ between men and women or those younger and older than 60, but there was an indication that the association was stronger for Alzheimer’s disease than for other dementias.

Professor Kivimaki, who is Director of the Whitehall II study, said: "Our observational findings support the hypothesis that mental stimulation in adulthood may postpone the onset of dementia.

“This suggests the average delay in disease onset is about one and half years, but there is probably considerable variation in the effect between people.”

This was an observational study, so can’t establish cause, and the researchers cannot rule out the possibility that some of the observed dementia risk may be due to other unmeasured factors.

However, this was a large, well designed study that used different types of analyses to provide a certain degree of validation for the main findings, and the results seem to be generalisable across different populations.

As such, the researchers say their findings suggest that people with cognitively stimulating jobs have a lower risk of dementia in old age than those with non-stimulating jobs.

“The findings that cognitive stimulation is associated with lower levels of plasma proteins that potentially inhibit axonogenesis and synaptogenesis and increase the risk of dementia might provide clues to underlying biological mechanisms,” Professor Kivimaki added.

Despite considerable previous research, the role of work-related mental enrichment in dementia has remained unclear, says Serhiy Dekhtyar at the Karolinska Institutet, in a linked BMJ editorial.

“This new work is an important reminder to all in the specialty of dementia prevention that we can only go so far with intervention studies that are short, late, small, and include only people who are heterogenous in their risk profiles to reveal any benefit of mental enrichment on dementia risk,” he writes.

The study involved researchers from Finland, France, Hungary, Sweden, the UK and the United States.

UCL researchers involved are based at UCL Epidemiology & Health Care, UCL Division of Psychiatry and the UK Dementia Research Institute at UCL.

*Out of 13 eligible cohort studies the researchers chose seven, which had relevant data to examine the association between cognitive stimulation at work and dementia incidence. The cohort studies analysed were the Finnish Public Sector (FPS); the GAZEL study, France; the Health and Social Support (HeSSup) study, the Helsinki Health Study (HHS), and the Still Working study, Finland; the Whitehall II study, UK; and the Works, Lipids, and Fibrinogen (WOLF) Stockholm and Norrland studies, Sweden.