Wasps are valuable for ecosystems, economy and human health (just like bees)

Wasps deserve to be just as highly valued as other insects, like bees, due to their roles as predators, pollinators, and more, according to a new review paper led by UCL and University of East Anglia researchers. 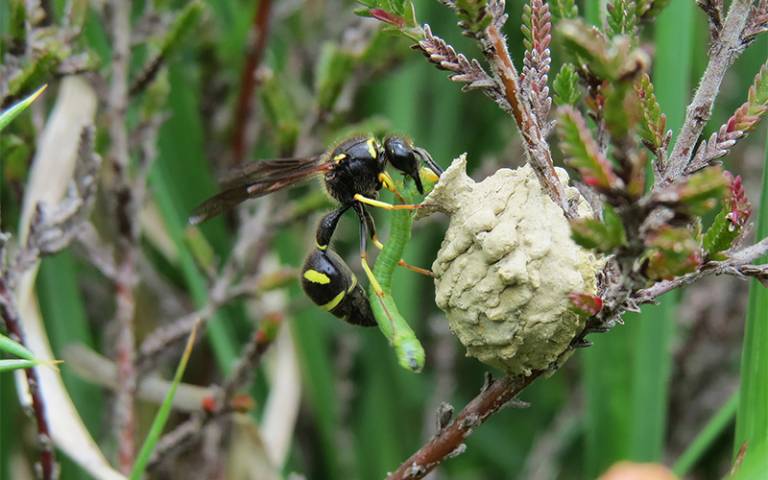 The study, published in Biological Reviews, compiles evidence from over 500 academic papers to review how roughly 33,000 species of stinging (aculeate) wasps contribute to their ecosystems, and how this can benefit the economy, human health, and society.

Lead author Professor Seirian Sumner (UCL Centre for Biodiversity & Environment Research, UCL Biosciences) said: “Wasps are one of those insects we love to hate – and yet bees, which also sting, are prized for pollinating our crops and making honey. In a previous study*, we found that the hatred of wasps is largely due to widespread ignorance about the role of wasps in ecosystems, and how they can be beneficial to humans.

“Wasps are understudied relative to other insects like bees, so we are only now starting to properly understand the value and importance of their ecosystem services. Here, we have reviewed the best evidence there is, and found that wasps could be just as valuable as other beloved insects like bees, if only we gave them more of a chance.”

Wasps are top predators of other insects. Predation by insects – as biocontrol to protect crops – is worth at least $416 billion (US) per year worldwide. Yet, this figure almost completely overlooks the contributions of hunting wasp predation. The review highlights how wasps’ role as predators makes them valuable for agriculture. Wasps regulate populations of arthropods, like aphids and caterpillars that damage crops. Solitary wasp species tend to be specialists, which may be suited to managing a specific pest, while social wasps are generalist predators, and may be especially useful as a local source of control for a range of crop-eating pests.

The researchers say that wasps could be used as sustainable forms of pest control in developing countries, especially tropical ones, where farmers could bring in populations of a local wasp species with minimal risk to the natural environment. Professor Sumner and colleagues recently published a study** finding that common wasp species are effective predators that can manage pests on two high-value crops, maize and sugarcane, in Brazil.

The review also highlights the pollination services provided by wasps. Pollination by insects is vital for agriculture, and its economic importance has been valued at greater than $250 billion (US) per year worldwide.

The researchers found evidence of wasps visiting 960 plant species. This included 164 species that are completely dependent on wasps for pollination, such as some orchid species that have evolved adaptations to attract the wasps they rely on, such as an appearance that mimics the back end of a female wasp. Many wasps are also generalist pollinators that visit a wide variety of plants, so the researchers say they could serve as ‘backup pollinators’ if a plant loses its local primary pollinator.

The review also describes other uses for wasps such as wasp-derived medications, as their venom and saliva have antibiotic properties, while yellowjacket wasp venom has shown promise in treating cancer. Wasps may even be a valuable food source, as their larvae are already harvested in some tropical countries for food.

Co-author Dr Alessandro Cini (UCL Centre for Biodiversity & Environment Research, UCL Bioscience and University of Florence) said: “The value of wasps in supporting our crops remains poorly understood; we hope that by rehabilitating their bad reputation, we can collectively get the most value out of these fascinating creatures.”

The paper’s first author, Ryan Brock (University of East Anglia) said: “Alongside other insects, many wasp species are declining from factors such as climate change and habitat loss. As such, there is urgent need to address their conservation and ensure that habitats continue to benefit from the far-reaching ecosystem services that wasps provide.”

The research was supported by the Natural Environment Research Council and a Marie Curie fellowship from the European Commission.