A single qubit on a standard silicon transistor chip has been successfully demonstrated as “quantum capable” in a new study by the UCL spinout Quantum Motion, led by researchers at UCL and Oxford University. 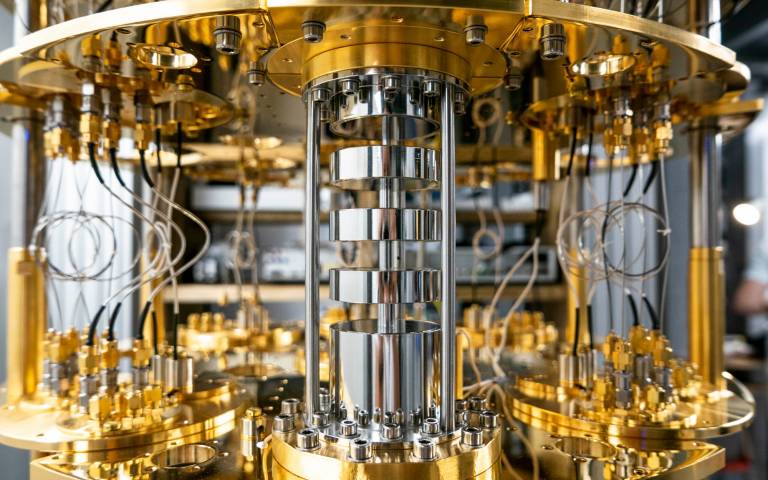 The qubit is the building block of quantum computing, analogous to the bit in classical computers. To perform error-free calculations, quantum computers of the future are likely to need at least millions of qubits. The latest study, published in the journal PRX Quantum, suggests that these computers could be made with industrial-grade silicon chips using existing manufacturing processes, instead of adopting new manufacturing processes or even newly discovered particles.

For the study, researchers were able to isolate and measure the quantum state of a single electron (the qubit) in a silicon transistor manufactured using a ‘CMOS’ technology similar to that used to make chips in computer processors. Furthermore, the spin of the electron was found to remain stable for a period of up to nine seconds. The next step is to use a similar manufacturing technology to show how an array of qubits can interact to perform quantum logic operations.

Professor John Morton (London Centre for Nanotechnology at UCL), co-founder of Quantum Motion, said: “We’re hacking the process of creating qubits, so the same kind of technology that makes the chip in a smartphone can be used to build quantum computers.

“It has taken 70 years for transistor development to reach where we are today in computing and we can’t spend another 70 years trying to invent new manufacturing processes to build quantum computers. We need millions of qubits and an ultra-scalable architecture for building them, our discovery gives us a blueprint to shortcut our way to industrial scale quantum chip production.”

The experiments were performed by PhD student Virginia Ciriano Tejel (London Centre for Nanotechnology at UCL) and colleagues working in a low-temperature laboratory. During operation, the chips are kept in a refrigerated state, cooled to a fraction of a degree above absolute zero (−273 degrees Celsius).

Ms Ciriano Tejel said: “Every physics student learns in textbooks that electrons behave like tiny magnets with weird quantum properties, but nothing prepares you for the feeling of wonder in the lab, being able to watch this ‘spin’ of a single electron with your own eyes, sometimes pointing up, sometimes down. It’s thrilling to be a scientist trying to understand the world and at the same time be part of the development of quantum computers.”

While the applications of quantum computing differ from traditional computers, they will enable us to be more accurate and faster in hugely challenging areas such as drug development and tackling climate change, as well as more everyday problems that have huge numbers of variables – just as in nature – such as transport and logistics.