The “wobble”, or rate of precession, of the muon particle in a magnetic field is different from what our best theoretical model of the subatomic world would predict, according to an experiment involving UCL researchers that strengthens evidence for new, unknown physics. 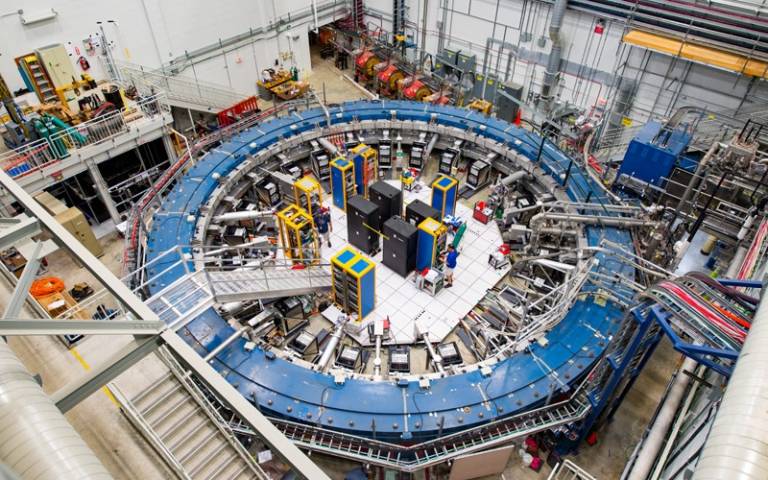 The Muon g-2 experiment, carried out at the Fermi National Accelerator Laboratory in the United States, measured with unprecedented precision the rate at which the muon “wobbled” (precessed) as it circulated a 15-metre magnetic ring at nearly the speed of light.

When placed in a magnetic field, the particle acts like a tiny magnetic compass and, like the axis of a spinning top, it precesses, or rotates, as its spins. This rotation was faster than is predicted by the Standard Model of particle physics.

Dr Gavin Hesketh (UCL Physics & Astronomy), g-2 lead at UCL, said: “The new result gives strong evidence that there may be a previously unknown particle or force of nature influencing the muon’s behaviour. This measurement could mark the start of a new leap in our understanding of the universe.”

Dr Rebecca Chislett (UCL Physics & Astronomy), who led building and running the data acquisition system for the experiment, said: “The Standard Model is very successful at accurately describing the very smallest things in the universe that we know about. But it doesn’t explain everything – such as gravity, or dark matter. A goal of particle physics is to find the limits of the Standard Model, to work out where it goes wrong, so we can gain new insights about the subatomic world. This experiment may have found a hint of this new physics.”

The muon is 200 times more massive than its cousin, the electron. It is unstable and decays in a few millionths of a second. As muons circulate in the Muon g-2 experiment, they interact with subatomic particles popping in and out of existence. Interactions with these short-lived particles cause the muons’ precession to speed up or slow down very slightly. A different rate of precession from what the Standard Model predicts suggests additional forces or particles that the model does not account for.

Professor Renee Fatemi, a physicist at the University of Kentucky and the simulations manager for the Muon g-2 experiment, said: “This quantity we measure reflects the interactions of the muon with everything else in the universe. But when the theorists calculate the same quantity, using all of the known forces and particles in the Standard Model, we don’t get the same answer. This is strong evidence that the muon is sensitive to something that is not in our best theory.”

The international Muon g-2 experiment, involving dozens of labs and universities in seven countries including the UK, aimed to replicate a previous experiment at the US’s Brookhaven National Laboratory, whose results, published in 2006, suggested the muon’s behaviour deviated from the Standard Model. The latest measurement confirmed this result with more certainty.

Combined with other developments including the LHCb result last week, it could herald a new era for physics.

Scientists in the UK, funded by the Science and Technology Facilities Council, played a vital role in the experiment, with teams at UCL building a key detector and developing software to analyse the data. Other UK institutions involved include the Universities of Manchester, Liverpool, Lancaster and the Cockcroft Accelerator Institute.

Professor Mark Lancaster, of the University of Manchester, who is the UK lead for the g-2 experiment, said: “This measurement alone has a one in a thousand chance of being a statistical fluke and one in 40 thousand when combined with the previous measurement from Brookhaven. It falls short of the one in a million gold standard used in particle physics to claim a discovery, but we are already analysing much more data that will significantly improve the precision of the measurement by more than a factor of two.”